Thomas Markle has shared photos of daughter Meghan as a 16-year-old on stage at high school, adding that she would always play ‘something glamorous’.

The images, from the latest video shared by Mr Markle, show the future Duchess of Sussex performing at Immaculate Heart High School in Los Angeles, with her father branding her ‘feisty Meg’.

Meghan, now 38, is in a black dress and pearls with fur draped over her arm in the images, where she plays a woman in a dressing room and a woman at a spa.

Mr Markle, 74, said Meghan would be ‘pretty shocked’ if she saw the performance now.

He added that he would film every performance his daughter was in growing up. 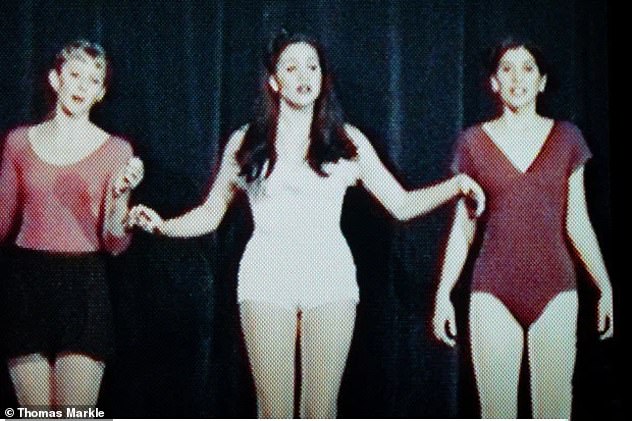 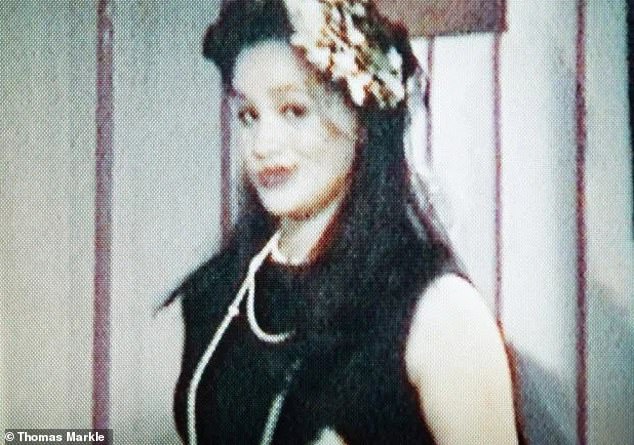 Her father labelled her ‘fesity’ for the performance, which shows her play the role of a woman in a dressing room and a woman at a spa

Mr Markle told the Sun: ‘It’s three girls acting out being in a dressing room. Meghan would always play something glamorous.’

In the performance, Meghan initially plays the role of one of three women in a dressing room, at one point letting out an anguished scream.

She then comes out later in a white leotard, before lying down and stretching on stage.

She also plays the role of a woman enjoying a trip to the salon.

Her father said: ‘She’s playing a part in a spa. This is funny actually — very dramatic.’

The images of Meghan emerged last night, with Mr Markle appearing on Good Morning Britain to discuss his daughter today.

The Duchess of Sussex’s estranged father spoke to Piers Morgan and Susanna Reid on the ITV 1 show in his first live TV interview since Megxit.

Mr Markle branded Harry and Meghan’s decision to leave Britain for Canada as ’embarrassing’ and ‘hurtful’ to the Queen.

The Sussexes have received stinging criticism for their bombshell choice to resign as senior royals after just 20 months of marriage – but Mr Markle is sure this is not because his daughter is mixed-race. 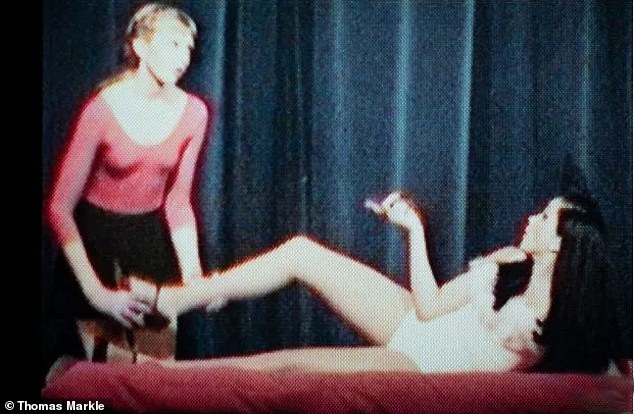 Dressed in a white leotard, the future Duchess of Sussex lays down and stretches as she plays the part of a woman at a salon

Speaking from California he said: ‘I’m having trouble buying that. There’s never been a problem with Meghan in terms of her race. I think England is far more liberal than the US, I don’t think she is being bullied in anyway, or any shape, because of racism’.

Piers Morgan then asked if the couple’s use of private jets when urging the world to tackle climate change was hypocritical, Mr Markle said: ‘I think it is, if you are preaching to do that then you should be responsible. Take a note from your brother [William] and take public transportation’.

The 75-year-old today revealed he now plans to do a major interview every month in the hope his daughter will ‘reach out’ to him. 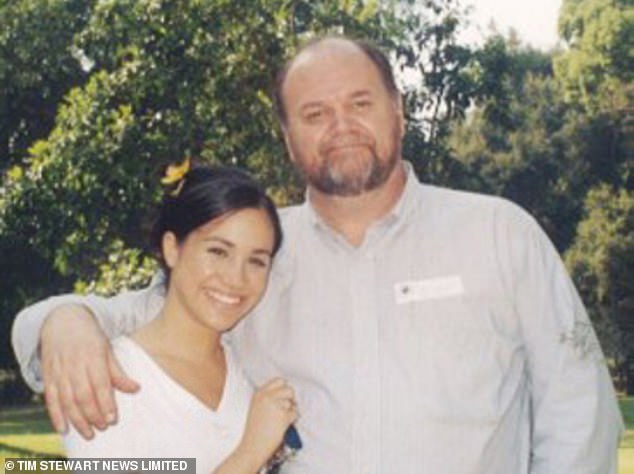 Mr Markle, who has not spoken to his daughter (pictured together in her youth) since the eve of her wedding to Harry in May 2018, shared his pride at the clip 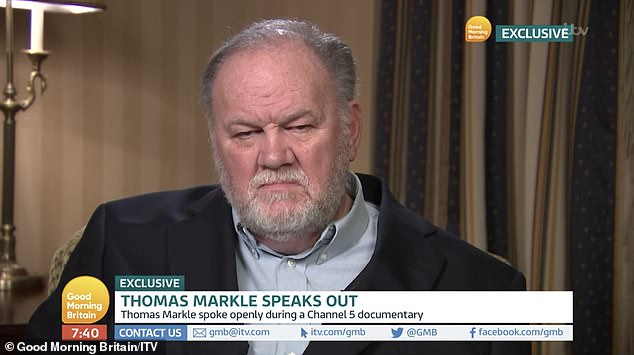 Meghan’s mother Doria, Thomas’ ex-wife, was his last hope but has failed to respond to his letters, he said, adding: ‘We have had no conversations, so obviously she [Doria] is avoiding me or has been told to’.

And when asked what he would say to Meghan if she was watching the show this morning he said: ‘I would tell her: ‘I love you, let’s sit down and work this out’,’ and his message for Harry would be: ‘Man up and fly down and see me and we will talk’.

Mr Markle has not spoken to his daughter since the eve of her wedding to Harry in May 2018, calling the couple’s decision to quit as senior royals the ‘dumbest thing’.

He says his health has faltered since they became estranged and although he admits his media interviews will upset Meghan and Harry, he still hopes they will be reunited.

He said: ‘I love my daughter, I’d love my grandson and I’m sure I’d love Harry if I met him.

The Duchess of Sussex’s estranged father has spoken to Piers Morgan and Susanna Reid (left) on ITV 1’s Good Morning Britain in his first live TV interview since she leave Britain for Canada, calling their decision ’embarrassing’

He added: ‘It’s silly it’s gone on for too long, I would like to make peace with Meghan and Harry. I am at their mercy, if they want to get in touch with me I’m sure it won’t be a problem’.

Thomas Markle has warned that ‘everything will come out’ if he faces daughter Meghan in court.

The Duchess of Sussex is suing the Mail on Sunday – the sister paper of the Daily Mail – for publishing a personal letter she sent to him in August 2018.

Mr Markle has already agreed to be a witness and pledged to expose what he said were ‘lies’ about him. ‘It will be emotional. I don’t know how we will both accept it,’ he said.

‘It would be the worst place to have to meet her and Harry, but it might come down to that because I will certainly testify against the things that have been said about me. The lies.’ Labelling Prince Harry ‘whipped’, he went on to tell the Sun his daughter ‘had turned into [Harry’s] mother’.

However, he did admit it would be very difficult to testify against Meghan, 38, and reiterated he still loved her.

Tensions between the pair have been very fraught since he posed for staged photos in the run-up to her wedding.

He was then unable to attend the service as he suffered a heart attack at home in Rosarito, Mexico days before the ceremony in May 2018.

Meghan sent him the letter in the months after the wedding and allegedly accused him of breaking her heart by colluding with the paparazzi. Mr Markle then leaked part of the letter to the Mail on Sunday.

Meghan has accused the newspaper of breaching her privacy, her data protection rights and her copyright when it published extracts.

He said he is ’embarrassed’ by Harry and Meghan’s decision to  break ties with Harry’s family and flee the UK.

Asked what he would say to people who are critical of him doing TV interviews, Mr Markle told Good Morning Britain: ‘I would tell them to try being in my position for a while and see what it’s like – have a family member ghost you and not speak to you, and see how you feel.

‘It’s something that stays with you 24/7 every day, and it never goes away.

‘It’s always on your mind. You wake up with it. You go to sleep with it. It’s very hard to deal with.’

Asked about the possibility of meeting Meghan and Harry at court as part of her legal action against Associated Newspapers, owner of the Mail on Sunday, Mr Markle said: ‘If it comes to meeting them in a courtroom, that’s great. At least I’d finally get to see them.’

He went on to say he did not want a ‘battle’.

He added: ‘The letter was sent to me, it was described in People Magazine by people calling “themselves friends of Meghan” as a loving letter reaching out to me – the word love never came in the letter except at one time when she said her “loving husband”, she never once asked about my health how I felt or anything. This letter that was sent to me – she claims it was her letter but if it has a stamp on it in the United States it becomes my letter as well.

‘I reached out to the Mail on Sunday, they didn’t come to me. I reached out and I said I want to publish part of this letter because I want to make some things straight about what was being said about me in People Magazine’.

Mr Markle said he still feels that Harry could reach out to him now, adding: ‘This shouldn’t keep going on. I mean they are putting this… making this a big drama for the world every day is kind of ridiculous.

Mr Markle has claimed the duchess sent him only occasional ‘modest’ financial gifts after landing a role in the hit TV series Suits, even though he was still paying off her college debts.

When Piers said he felt sorry for the way he was treated, he added: ‘I appreciate that. I’m not looking for pity. I just want, what’s most important to me, is getting my family back together and for the truth to be told, that’s all’. 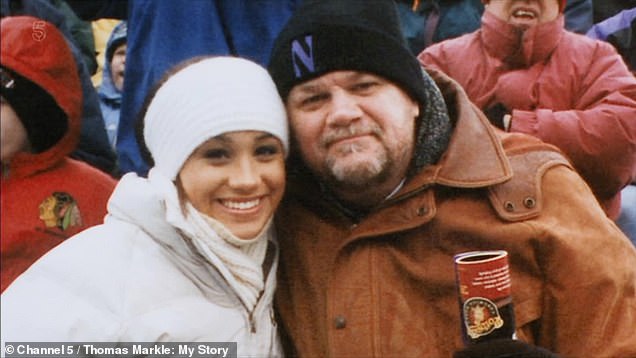 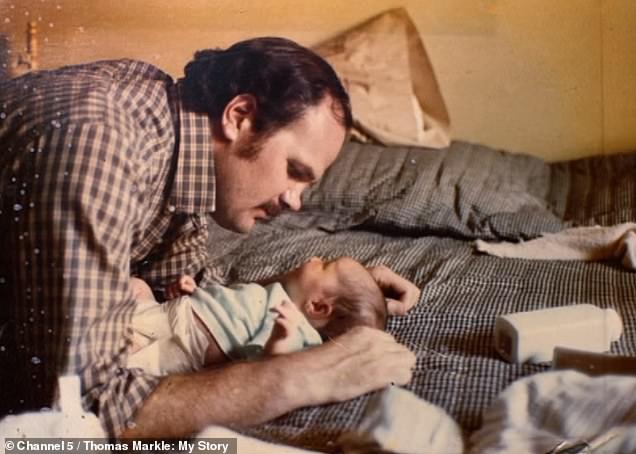 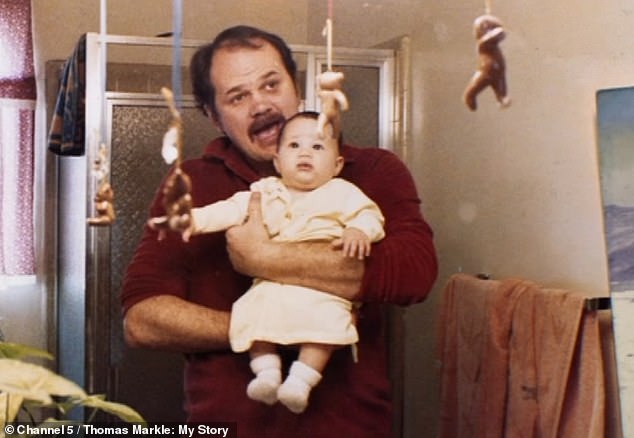 Thomas holds his daughter, who he described as his pride and joy, saying he couldn’t put her down when he was home from work

He concluded: ‘If after this interview, if I don’t hear from somebody in 30 days, I’ll give 30 days and I’m going to try again, because 30 days is enough time to get back to me. I don’t want to sit in silence in my living room for the rest of my life, waiting for someone to call me back or get in touch with me’.

Last night, he also warned that ‘everything will come out’ if he faces Meghan in court.

The Duchess of Sussex is suing a newspaper for publishing a personal letter she sent to her father in August 2018.

Mr Markle has already agreed to be a witness and pledged to expose what he said were ‘lies’ about him.

‘It will be emotional. I don’t know how we will both accept it,’ he said.

‘It would be the worst place to have to meet her and Harry – but it might come down to that because I will certainly testify against the things that have been said about me. The lies.’ 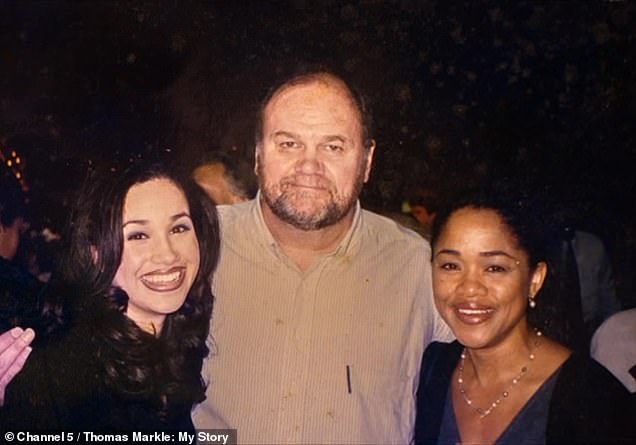 Mr Markle, Doria and their daughter as she started her career and within a few years of this photo she would be earning $40,000 per episode of Suits 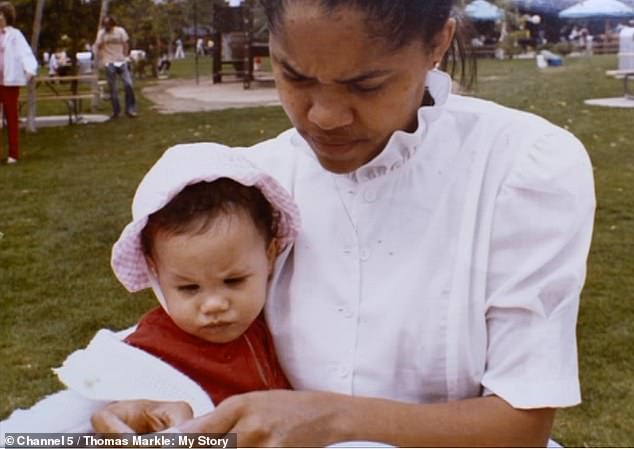 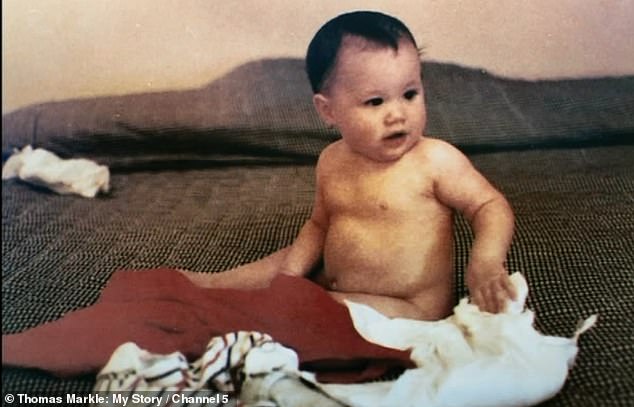 Today’s GMB interview with Mr Markle comes just a few days after he appeared in a bombshell documentary charting the relationship with his daughter.

He also described his pride after the birth of his daughter in August 1981 as he opened up to Britain’s Channel 5 in a film, watched by 1.2million people last week – just days after the Duke and Duchess of Sussex started their new life in Canada.

Mr Markle says Meghan’s childhood years were ‘the happiest of my life’ as he shared dozens of pictures of her key moments including on the day she entered the world and as father and daughter bonded while he changed her nappies in the following days.

There are also a string of happy photos of Meghan with her mother Doria Ragland, including at family Christmas parties and summer picnics near their home in California, before she moved in with Thomas as a teenager after the couple’s divorce.

Mr Markle has also shared rare home video footage of Meghan’s first school productions where he says a star was born, her high school graduation and leaving for college.

An emotional Mr Markle also said he was ‘jealous’ and cried as he saw the Prince of Wales walking his daughter down the aisle and justified making the film to defend himself and rebut the ‘trashy things’ said about him.