‘How did nobody think this through?’ Tory fury at £2.6m ‘blue elephant’ briefing room after Boris Johnson AXES plan for White House-style daily briefings with MPs saying £125,000 spokeswoman Allegra Stratton ‘won’t hang around’

MPs told MailOnline the No9 briefing suite is now a ‘blue elephant’ in a mocking nod to its garish decor – amid speculation that the PM’s press secretary Allegra Stratton will not ‘hang around’ after her main role was axed.

Daily televised briefings had been due to start in the upgraded Downing Street briefing room next month, after the PM insisted the government wanted to provide the public with more direct information.

However in an embarrassing U-turn the facility, which was fitted out with microphones, control desks, cameras and computers, will instead be used by ministers.

Ms Stratton, a former TV journalist and aide to Chancellor Rishi Sunak, will leave Downing Street to head up communications for the major climate change summit planned for Glasgow this November.

One Tory MP said: ‘It should have been blatantly obvious that when there are bad days it would be very uncomfortable for the press secretary to stand there and face hostile questions. It is incredible that this was not thought through at the outset.’

Another former minister said: ‘It was always a slightly dangerous thing. You are sending out a lamb to the slaughter… It was a really bad idea. Now it seems to be a blue elephant.’

The MP added of Ms Stratton: ‘She is not going to hang around, is she.’ 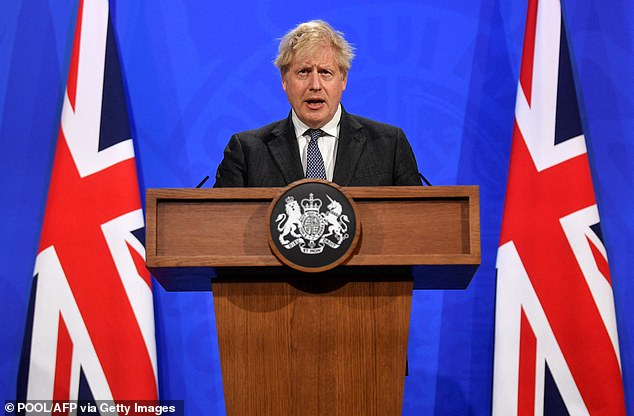 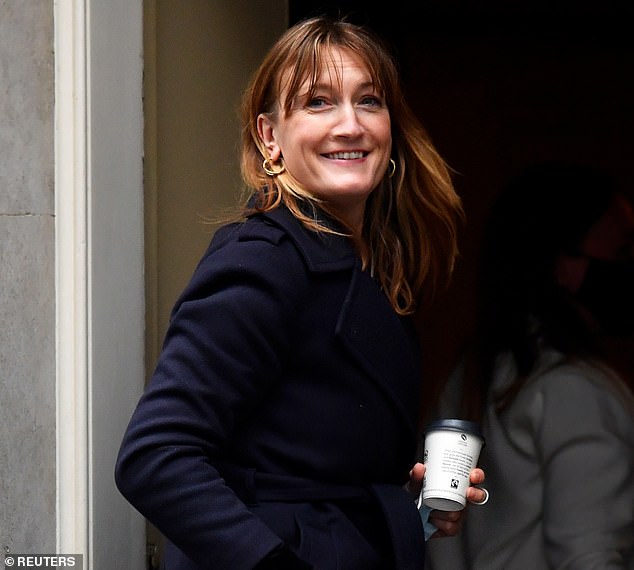 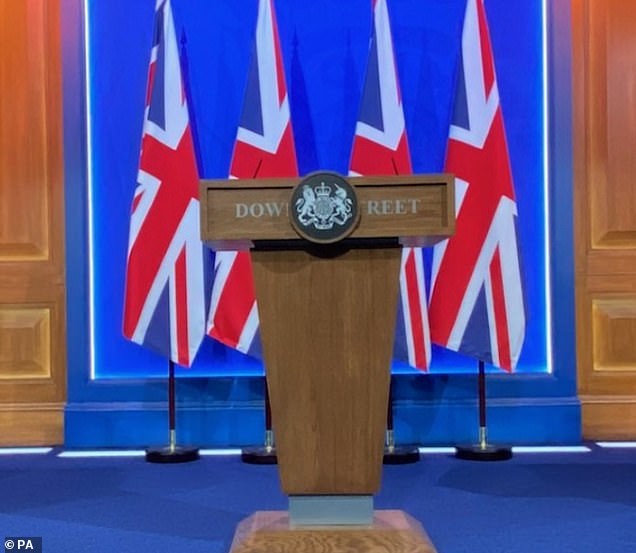 In a nod to the White House, a podium was placed at the head of the room complete with an official Downing Street lectern in front of four Union Jack flags

The two men persuaded Mr Johnson that televised briefings with political journalists would allow the government to speak directly to the public without the filter of the media.

But Mr Cain opposed the appointment of Miss Stratton, who then sided with the PM’s fiancée Carrie Symonds to oust him last November, triggering the departure of Mr Cummings a few days later.

Downing Street has repeatedly insisted that the briefings, which were originally due to start last autumn, would go ahead regardless.

However a planned launch on January 11 was shelved because of the lockdown. And No 10 then refused to confirm this week that the latest launch date on May 17 would go ahead.

The decision to axe the briefings reflects concerns among Mr Johnson’s most senior advisers that the plan risked backfiring. Mr Johnson’s new communications director Jack Doyle and chief of staff Dan Rosenfield are both thought to have argued the briefings would be a mistake.

One Whitehall source said the PM had been persuaded that the briefings would only feature on news bulletins when the government was having a bad day. There were also concerns that the events would see journalists raise awkward questions about the PM’s private life which broadcasters like the BBC might otherwise ignore.

The decision is a blow to Ms Stratton, who was personally persuaded by the PM to leave her role as communications director at the Treasury in order to become ‘the face of the government’.

In a statement, Ms Stratton said: ‘I am delighted to be starting this new role. The COP26 climate conference is a unique opportunity to deliver a cleaner, greener world and I’m looking forward to working with the Prime Minister and Alok Sharma to ensure it is a success.’

A Downing Street source last night insisted she was heading to a ‘great job’ as head of communications for the COP26 climate summit, which is ‘a huge global issue and massive priority for the PM’.

But another source acknowledged the decision was ‘tough on Allegra’.

No 10 defended the decision to spend £2.6 million on converting part of 9, Downing Street into a venue for Miss Stratton’s briefings.

A source said the room would be used for press conferences by the PM and other ministers. It is also likely to be used as a venue for off camera briefings with political journalists.

‘We have seen during the pandemic that the public have welcomed ministers and the PM doing the press conferences,’ the source said. ‘That will continue, with elected representatives speaking on behalf of the government’s agenda.’ Miss Stratton was the first ever named press spokesman in No 10. Sources confirmed that in future, spokesman will return to briefing on an anonymous basis. 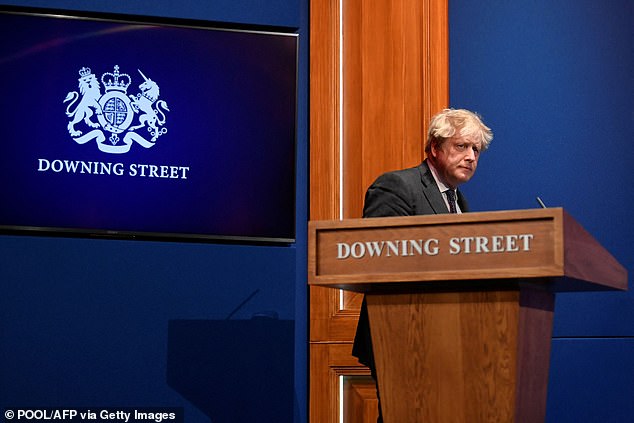 Mr Johnson said the White House-style televised press briefings would allow the nation to have a ‘more direct, detailed information from the Government about what is going on’ 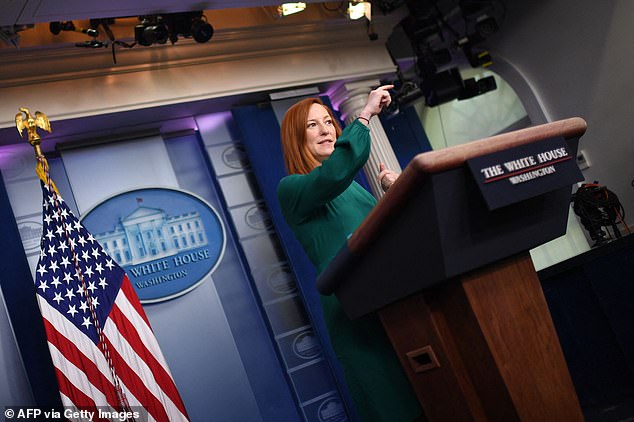 The new briefing room appeared to  have been inspired by the White House. Pictured: White House Press Secretary Jen Psaki speaks during the daily press briefing