Home » Tourist, 28, plunges 120ft off Dorset cliff 'while taking a selfie' – but SURVIVES after landing in just 4ft of water

Tourist, 28, plunges 120ft off Dorset cliff 'while taking a selfie' – but SURVIVES after landing in just 4ft of water

A TOURIST cheated death after plunging 120ft off a cliff after slipping when he lost his balance "taking a selfie" near the edge.

The 28-year-old miraculously survived the sheer drop with just "minor injuries" after landing in four feet of water in Dorset on Saturday afternoon. 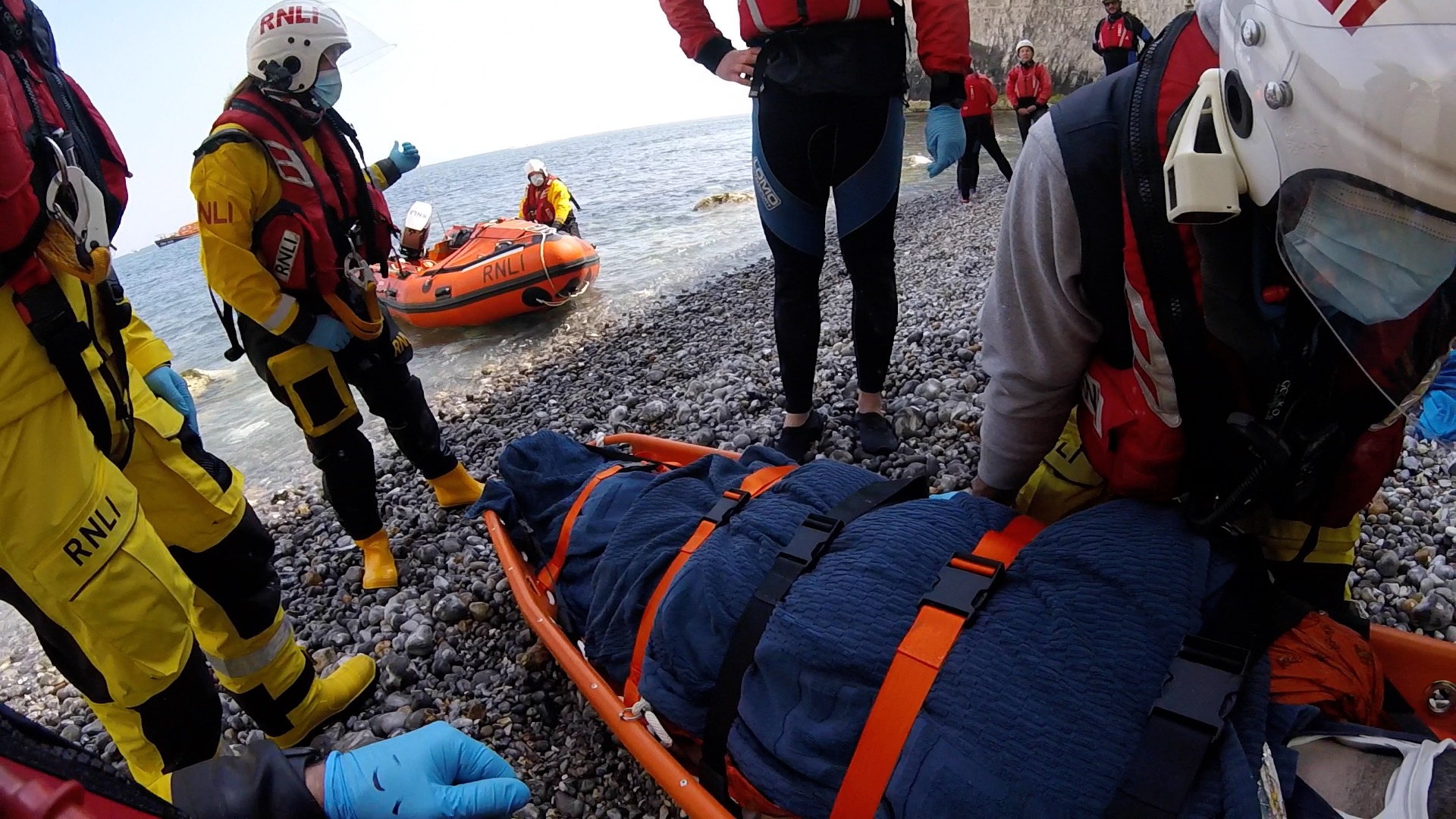 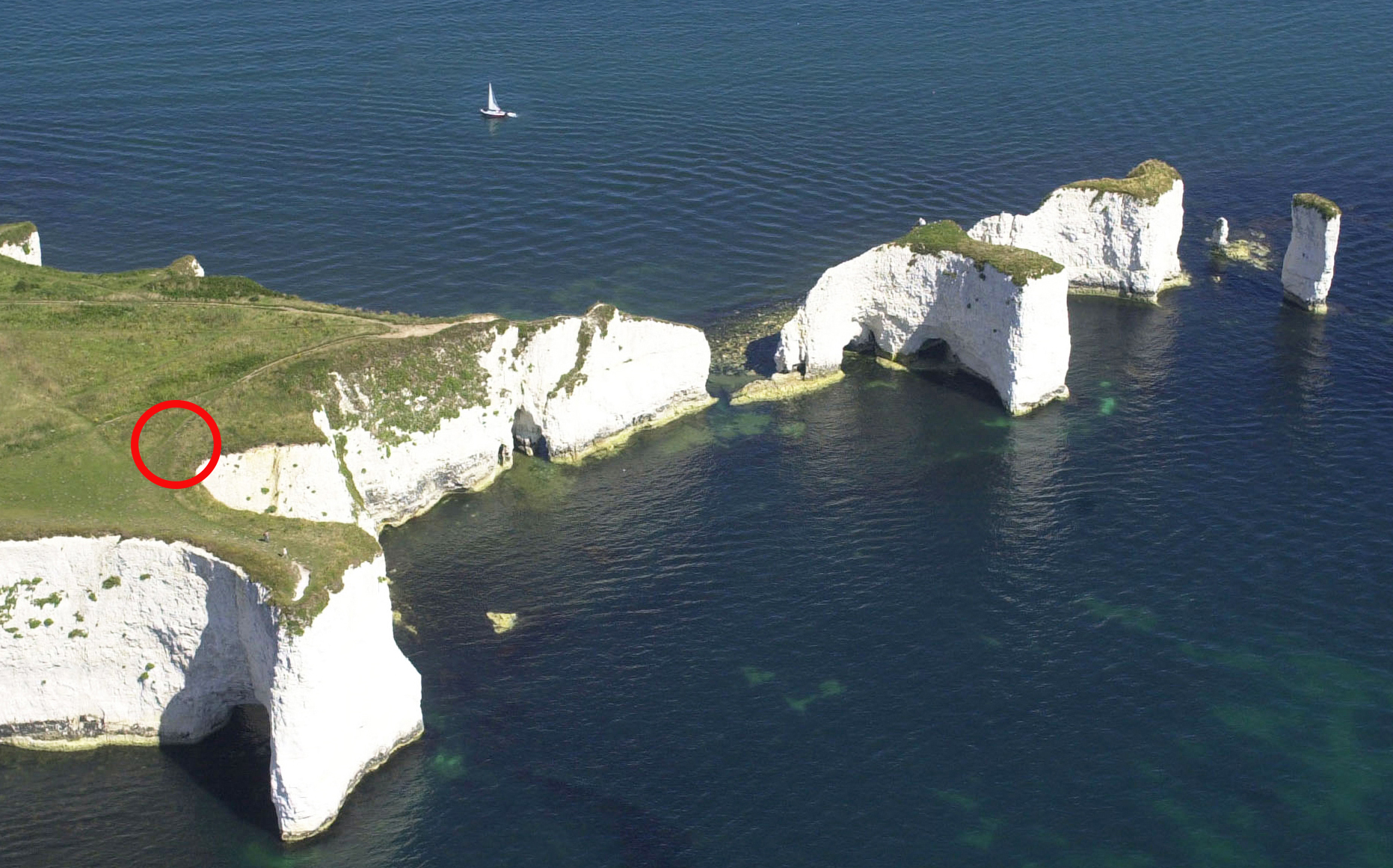 Five friends he was with looked on in horror as he disappeared over the precipice and plummeted towards the ground after reportedly posing for a snap on Old Harry Rocks, near Swanage.

Luckily, the tide was in at the time and the man landed in shallow water.

A group of kayakers in the area witnessed the incident and paddled towards the casualty.

They helped him on to the rocky shore at the foot of the chalk cliff and gave him first aid.

Incredibly, the man was conscious and talking and was said to have only suffered cuts and bruises in the sheer fall.

The inshore Swanage lifeboat arrived at the scene and placed him on a stretcher and ferried him to the all-weather lifeboat. 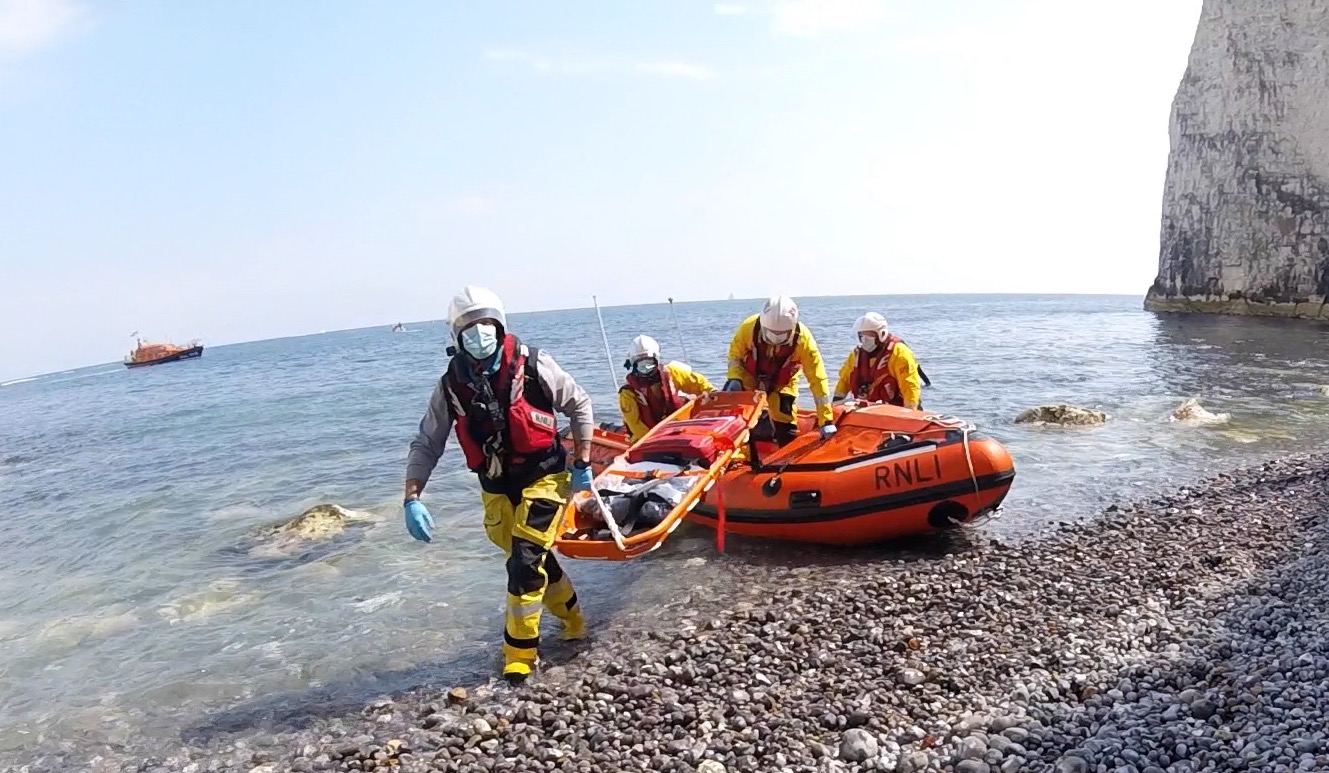 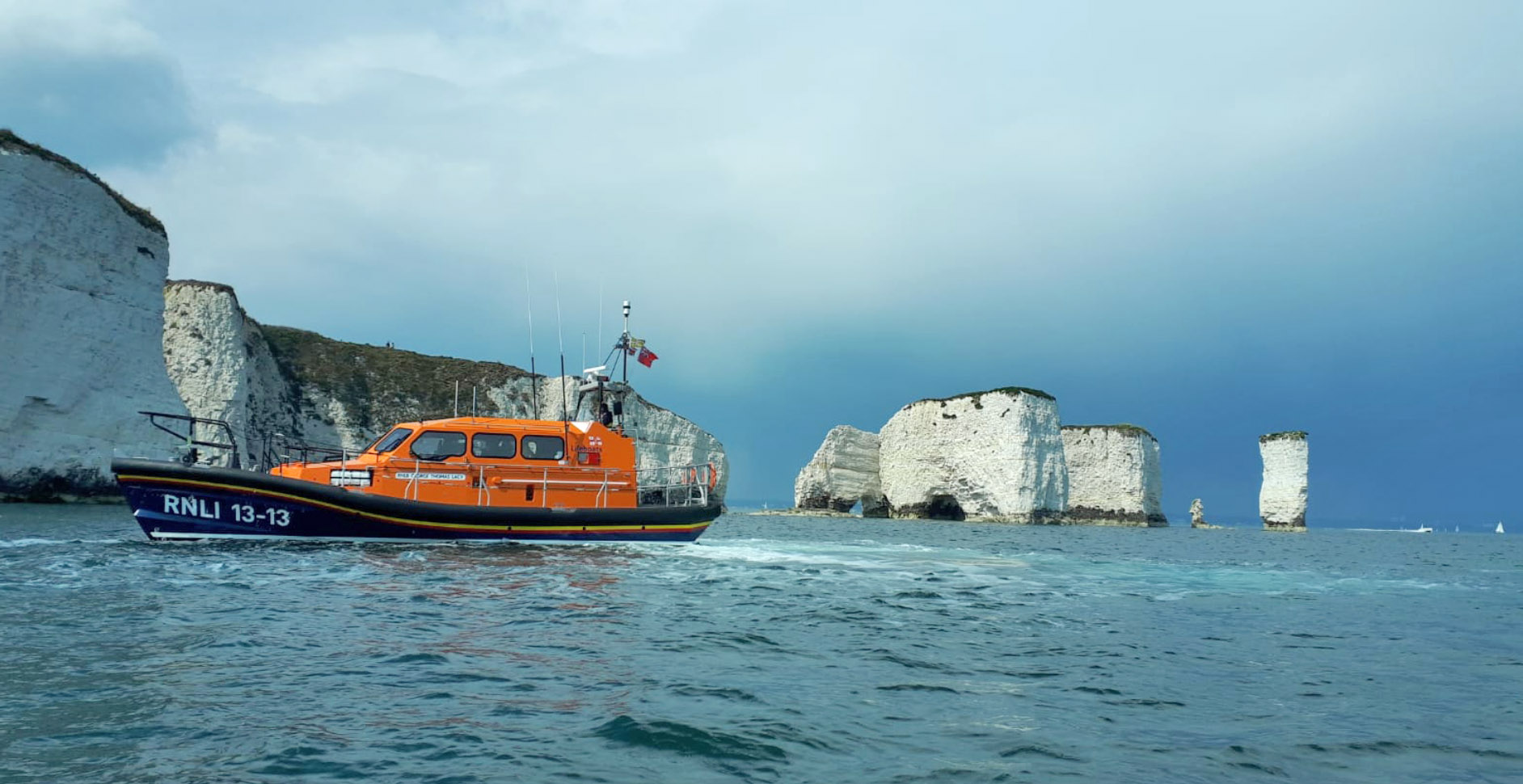 He was taken to the Swanage lifeboat station where a land ambulance then whisked him off to hospital to check if he had suffered any internal injuries.

Ian Brown, of the lifeboat team, said it was a miracle that man was not killed.

"I honestly don't know how he is still alive today," he said.

"It is a sheer drop of anywhere between 90ft to 120ft there. The tide was in at the time and he landed in the water.

"It wouldn't have been that deep, probably 4ft at most.

"He is incredibly lucky to have suffered relatively minor injuries.

"Apparently he was conscious and talking and was fine. His injuries were reported to have been cuts and bruises."

I honestly don't know how he is still alive today.

The man and his five male friends had come down from the London area and were visiting the beauty spot of Old Harry Rocks between Studland and Swanage when it happened at just after 2pm yesterday.

Lisa Andrews, who was at the scene, said: "We were nearby. I spoke to a man who witnessed it.

"Apparently he was taking a selfie a slipped. Apparently people were warning him he was too close. I really hope he is OK."

Mr Brown has urged people to stay away from cliff edges to avoid potentially devastating incident.

"We are seeing a lot of people get too close to the edge there to take selfies all the time," he said,

"The cliffs there are very crumbly and our advice to anyone is to stand at least five metres back." 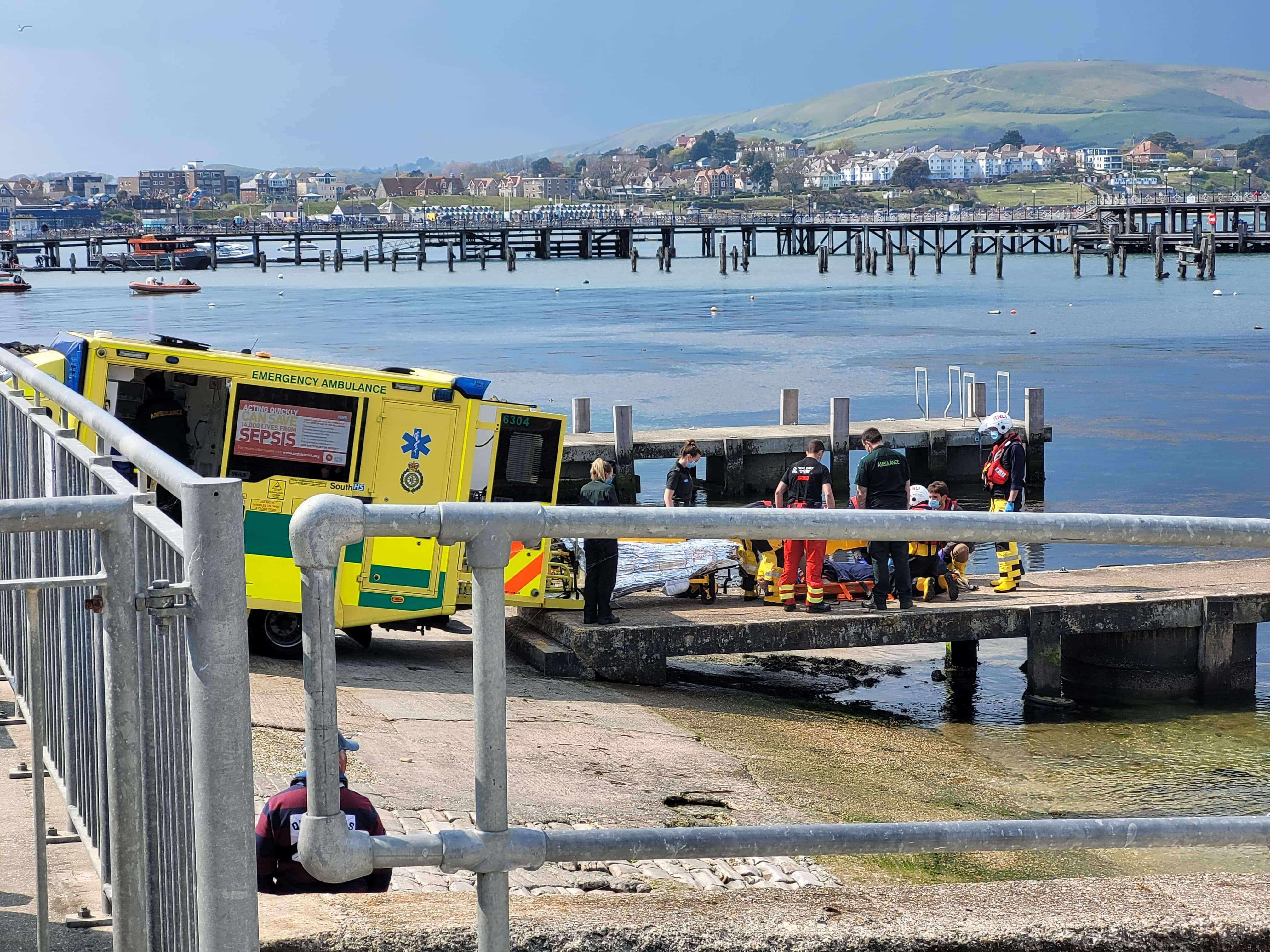 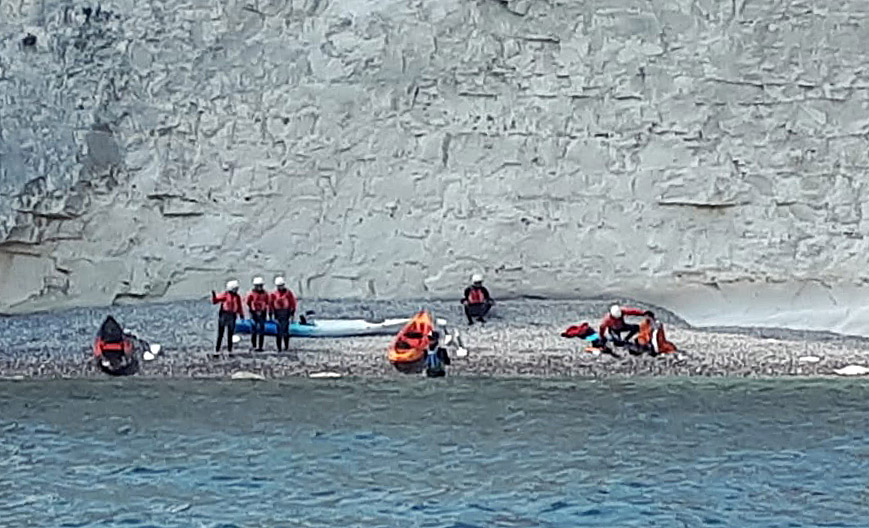 According to a witness, the man had been posing for a selfie when he lost his foot and fell.

Lisa Andrews, who was nearby when he slipped, said: "Apparently people were warning him he was too close.

Jack Reagan, from Poole, was on a 12ft fishing boat just off Old Harry Rocks at the time.

Mr Reagan, 50, said his attention was drawn to a group of people at the top of the cliff frantically waving at him.

"One of them yelled out that somebody had fallen over the cliff," he said.

I can't believe that he is alive. He should go and buy a lottery ticket he is that lucky.

"I looked over to me left and there was a guy swimming in the water towards a kayak. He managed to grab on to the front of the kayak and was helped to the shore.

"The kayak instructor got his first aid gear out and kept him warm. The guy who fell was sat up on the beach at this point.

"I can't believe that he is alive. He should go and buy a lottery ticket he is that lucky."

The emergency was attended by both Swanage lifeboats, the Swanage at St Albans coastguard teams, the South Wester Ambulance service and the air ambulance.

Becky Mack, the Swanage lifeboat helm, said: "It was an accident and he must have hit the water which saved him. It is amazing.

"The kayakers and a boat near to the scene were waving at us to indicate the casualty location.

"We immediately went ashore and carried out an assessment of the casualty and made plans to evacuate them.

"He was really fortunate that the kayakers were close by and that they were able to help so quickly. We think they helped him out of the water and on to the shore.

"He was alert and conscious. He was talking and was calm.

"The casualty was handed over to waiting paramedics and we hope they will make a full recovery."