Girl Guides sparks trans row by issuing statement from parents who let their seven-year-old son live their ‘true gender’ as a girl – in article blasted as ‘dangerous, reality-defying nonsense’

Girl Guides has sparked a trans row after publishing an interview with the parents of a child who began ‘living as a girl’ from the age of five.

The largest organisation for girls in Britain boasted of its ‘trans inclusive’ credentials as it told the story of ‘Rainbow’, one of its newest ‘Brownies’, in its summer magazine.

In the article, available online, parents Jane and Mike – not their real names – explain that when their child was born, they ‘assumed she was a boy’, before she began ‘identifying more with female characters, toys and books when she was 18 months old.’

The article was shared on Twitter, where it divided opinion.

Maya Forstater, director of the Sex Matters group that has been supported by the author JK Rowling, refused to recognise the child as a girl.

She said: ‘This from Girlguiding is such dangerous, reality-defying nonsense. A feminine little boy who likes to wear dresses may well grow up to be a gay man. He is not a girl. 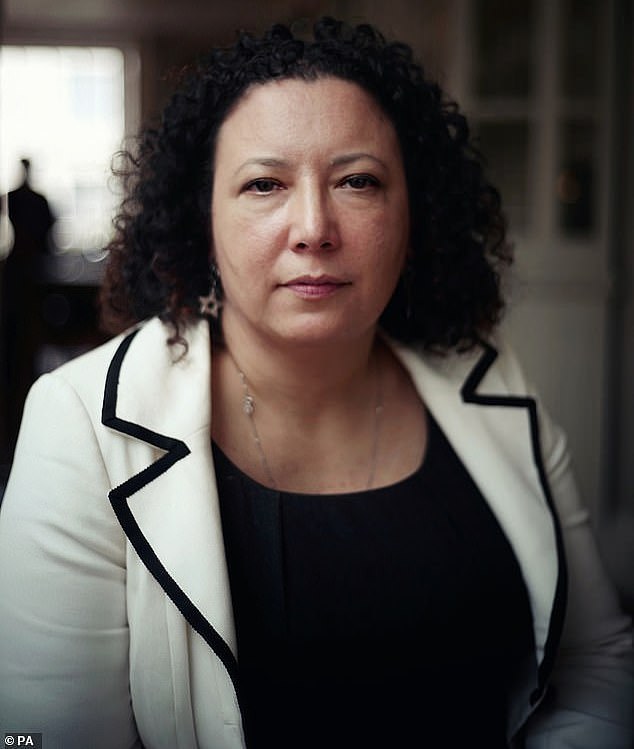 Maya Forstater, director of the Sex Matters group that has been supported by the author JK Rowling, refused to recognise the child as a girl as she criticised the article on Twitter 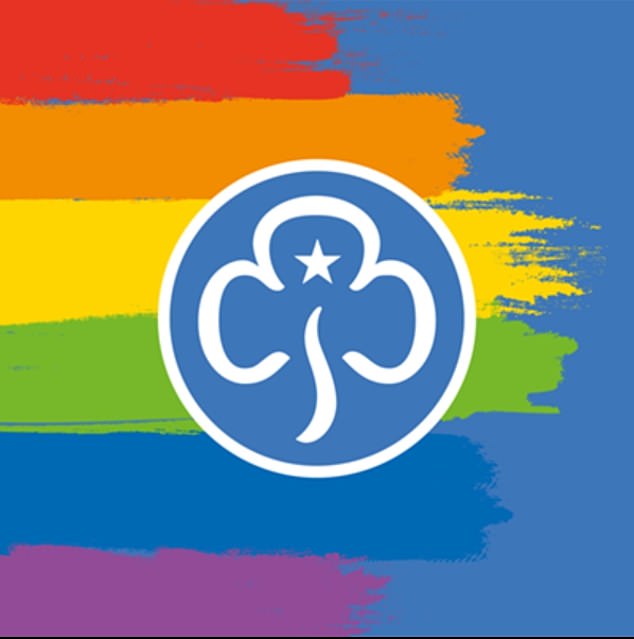 Girlguiding chiefs previously advised staff to learn a glossary of words such as ‘aromantic’, ‘demisexual’ and ‘agender’and to encourage girls to learn the glossary in a task called the ‘vocabulary extravaganza’ Pictured: Girl Guides logo

‘The idea that a five-year-old knows their ‘true gender’ and should be socially transitioned and affirmed as being the opposite sex is extreme gender ideology, not cautious care.’

Some followers of Ms Forstater agreed with her, branding the piece ‘madness’, ‘dangerous’ and ‘bizarre.’

Others were more supportive, however, as one wrote: ‘Thank you for drawing my attention to this WONDERFUL trans-inclusive article on the Girl Guiding website.

‘I’m so PLEASED that @Girlguiding continue to be supportive of trans youth, and ignore the bigots and haters.’

The mother in the article said ‘Rainbow’ had been ‘begging me to buy a dress to wear in public’, which she initially refused, before finally agreeing because ‘at least with the dress on, she could get back to being a kid’.

‘Jane’ added: ‘My child had always talked about the differences between boys and girls but her questions accelerated as she got older. One day she said to us in a quiet voice: ‘My real name is Rainbow.’

The article said Rainbow’s ‘journey’ happened during the Covid-19 lockdowns.

‘When she went back to school after lockdown, she returned as her true gender, female,’ it read.

The article had some advice for parents who may come across ‘Rainbow’ or other trans children at Girl Guides – now called Girlguiding – telling them to simply ‘correct’ themselves if they get it wrong.

Jane and Mike said: ‘Using wrong pronouns might feel like a terrible thing to happen, but the important thing is to correct yourself and keep going. If you see them as a girl, then using the right pronouns should happen naturally.

‘Trans girls feel like girls and should be treated as such – as our daughter has said, they are the same on the inside, where it counts.

‘And if other parents ask questions, it’s important to remember that transgender members deserve privacy in the same way everyone else does.’

A Girlguiding spokesman said: ‘Girlguiding is an inclusive organisation which empowers members to find their voice and discover the best in themselves. 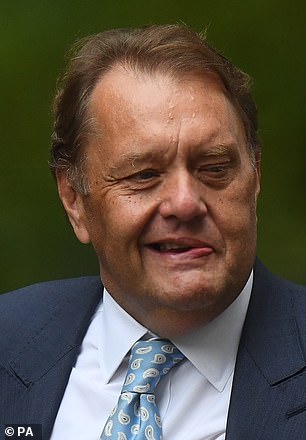 Sir John Hayes, of the Common Sense group of MPs, said parents ‘don’t expect (children) to be indoctrinated with a lot of woke claptrap’

‘We want to ensure that all members receive a great guiding experience and members are regularly invited to write for our guiding magazine to articulate their positive experience of Girlguiding.’

It comes after Girlguiding chiefs were accused earlier this month of promoting ‘woke claptrap’ after advising leaders to learn almost 100 terms linked to gender and sexual identity.

Britain’s biggest girls’ group advised staff to learn a glossary of words such as ‘aromantic’, ‘demisexual’ and ‘agender’, saying ‘it might be worth printing it off… so you can reference it’ with children.

The glossary also includes ‘pansexual’ – ‘attraction for members of all gender identities/expressions’ – and ‘constellation’, the structure of polyamorous relationships.

The guidance, first reported by the Sunday Express, encourages girls to learn the glossary in a task called the ‘vocabulary extravaganza’.

Sir John Hayes, of the Common Sense group of MPs, said parents ‘don’t expect (children) to be indoctrinated with a lot of woke claptrap’.

It comes after the Daily Mail previously revealed the Scout Association sold a £1.50 ‘trans fun’ badge for children as young as four, alongside ‘bisexual fun’, ‘lesbian fun’ and ‘pride fun’ options.

A spokesman for Girlguiding said at the time that it believed children should ‘know the importance of embracing different identities’.

The guidance says: ‘There are so many identities and experiences within the LGBTQ+ community, the idea of talking about it… might feel overwhelming.

‘We’ve put together some simple advice, explained lots of terms and suggested activities that you can do with any section.’ 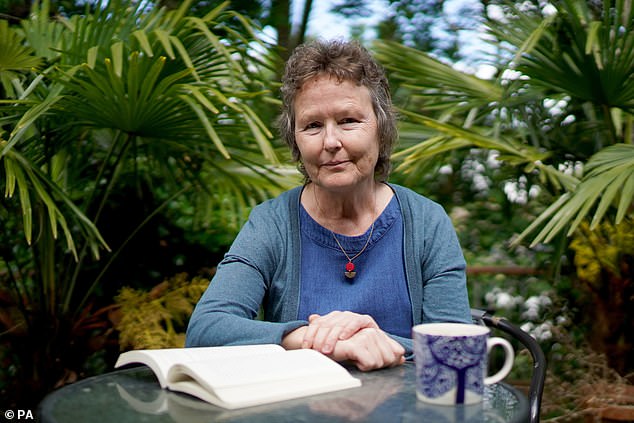 Stephanie Davies-Arai, founder of Transgender Trend, was awarded the British Empire Medal (BEM) for services to children in the Queen’s Birthday Honours list

The leaders are also advised to ‘explore gender’ with girls by using a controversial ‘genderbread person’ graphic, modelled on a gingerbread figure, which appears to show anatomical sex along a spectrum from zero to ‘female-ness’ and ‘male-ness’ at the other end.

The graphic has also been used in presentations for civil servants.

Stephanie Davies-Arai, founder of campaign group Transgender Trend, said the Genderbread graphic ‘presents a belief, an ideology around gender that is not scientifically based’, adding that it presents biological sex ‘around the subjective qualities of male-ness and female-ness rather than the objective material reality that it is’.

But Professor Monica Grady, a space scientist and the chancellor of Liverpool Hope university, told BBC Radio 4’s Broadcasting House programme that Guides ‘should be encouraged to understand’ issues around gender identity.

Read the ‘story of Rainbow’, shared on the Girl Guides website

‘My husband and I are lucky enough to be parents of a seven-year-old girl, Rainbow,’ says Jane. ‘She loves LEGO, climbing trees, reading, playing with her friends and not listening to us when we ask her to wash her hands before dinner.

‘She might sound very much like your children, and she is the same, except when she was born, we assumed she was a boy.’

‘We often meet people who don’t understand how we, as parents, ‘could let our boy become a girl”, says Jane.

‘Did we want them to be a girl? Was it parental influence? Shouldn’t we have just told them to stop? Understandable questions. Perhaps the best way to explain it is walk you through our story.’

Jane and her husband Mike started noticing that Rainbow identified more with female characters, toys and books when she was 18 months old.

‘Some people suggested we just say no, encourage her to identify with the male characters, but how can you explain that to a young child? To what end?

‘No to playing with toys she loved or characters she loved to pretend to be? It felt cruel to say no, to the say the least.’

As parents, Jane and Mike knew that they wanted Rainbow to be whoever she wanted to be, but they worried about other people’s reactions.

‘I never felt I needed to find a reason why my child couldn’t own a doll from the shop or why a scarf couldn’t be used to create long hair,’ Jane explains. ‘Yet, what I personally found harder was when she begged me to buy a dress. No longer in character, but to wear as herself in public. No one wants their child to be the centre of supermarket gossip or to be laughed at by others.

‘The first dress: a summer dress covered in butterflies. She was so happy. I used every trick in the book for it not to be worn beyond our home. ‘It isn’t practical for scooting’, I said, hiding it in the wash basket. Deep down, I was ashamed of my behaviour.

‘Then Mike asked, ‘Why does it matter?’ And of course, it didn’t really matter – but I cared how people would perceive our little family. I didn’t want to see the looks people gave my child or hear them snigger. But she was happy wearing the dress and beamed with it on! Without it she talked about nothing else. At least with the dress on, she could get back to being a kid.’

As she got older, Rainbow had more and more questions.

‘My child had always talked about the differences between boys and girls but her questions accelerated as she got older,’ says Jane. ‘One day she said to us in a quiet voice, ‘My real name is Rainbow’.

‘Until you’re in that position as a parent you cannot know how you will react. I could have laughed and said, ‘No it’s not.’ I could have compartmentalised her life: ‘OK you can be Rainbow at home, but not at school.’ We didn’t take this route. Instead we asked, ‘Can you tell us a bit more about how you feel? There are some boys who like all the things that society thinks are for girls but know themselves to be boys, and there are some who feel like they are girls inside.’

‘My child explained, ‘It’s the second one.’

‘At first, it felt alien. We made a few mistakes and wondered if it might change. We talked about pronouns and Rainbow wanted ‘she/her’, so we focused on this at home too. With the changes we had made at home, she was very happy and the persistent gender questions stopped. But we knew we needed to go beyond our four walls.’

A lot of Rainbow’s journey happened during the Covid-19 lockdowns. When she went back to school after lockdown, she returned as her true gender, female.