Bogota: Tribes from the Amazon have called for urgent action to protect the world’s largest rainforest in a formal motion to the International Union for Conservation of Nature (IUCN), to be considered at its global congress in France next month.

The Coordinating Body for Indigenous Organisations of the Amazon Basin (COICA), an IUCN member, wants the forum to vote in favour of protecting 80 per cent of the Amazon by 2025, to stem rising deforestation and help keep their lands and communities safe. 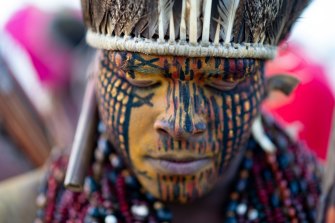 A member of an indigenous community joins a demonstration for indigenous land rights in Brasilia, Brazil, on Wednesday. Credit:Getty Images

COICA General Coordinator Jose Gregorio Diaz Mirabal, who submitted the emergency motion to the IUCN on Friday, said the ability to participate “represents an important space for us”.

“We need to be at the place where supposed solutions are being discussed to the planetary crisis,” said Diaz, who will attend the September 3-11 congress in Marseille.

Victoria Tauli-Corpuz, a former UN Special Rapporteur on the Rights of Indigenous Peoples, urged IUCN members to pass COICA’s motion “because of the grave environmental crisis the planet is in” and to discuss concrete plans to implement its recommendations.

The IUCN congress, to be held in person and virtually, is billed as the world’s largest conservation event held every four years, bringing together about 10,000 participants, including indigenous peoples, government officials and business leaders. 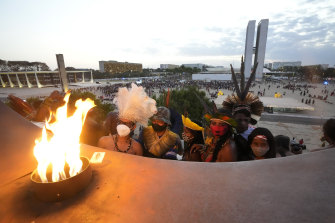 Indigenous people stand near the “Pyre of freedom” during the “Luta pela Vida,” or Struggle for Life mobilization in Brasilia during a protest for Indigenous land rights.Credit:AP

At the gathering, more than 1300 IUCN member groups from government, civil society and indigenous peoples will vote on a range of issues including how to tackle climate change, boost nature protection and promote a green COVID-19 recovery.

The aim is to inform policymakers and negotiators ahead of November’s UN COP26 climate summit in Scotland.

With low political and economic clout, indigenous peoples from the Amazon Basin’s nine countries often struggle to be heard on the global stage where decisions are taken that affect their lands and get little international funding, said Diaz.

“The call we will make is that finance should go to the indigenous people who conserve and protect the territory,” he said.

Indigenous leaders have requested meetings with French President Emmanuel Macron during the IUCN summit, as well as with US and European Union climate officials.

The Amazon plays a vital role in regulating the Earth’s climate by absorbing and storing planet-heating carbon dioxide.

Deforestation there is largely fuelled by illegal logging and gold mining, as well as soy and beef farming in Brazil, and forest clearance to plant coca crops in Colombia and Peru.

COICA’s motion also calls on Amazon-nation governments to ban industrial activities – such as mining and oil extraction – in primary forests until conservation initiatives and new agreements are put in place with indigenous peoples.

“There’s still time to change the model of development and consumption that’s destroying the Amazon. It’s time to start the transition,” Diaz said.