You can’t be a corgi owner and ignore the link to the Queen, says Lucinda Mathieson.

Several times a week, when Mathieson is walking her corgi, Honey, a passer-by will say, “That’s the Queen’s dog,” or “Here comes a royal.” 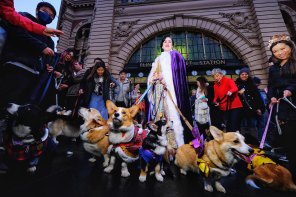 Katie Hall, dressed as the Queen, wrangles some of the corgis that posed in front of Flinders Street Station.Credit:Luis Enrique Ascui

To mark the Queen’s Platinum Jubilee, and celebrate the monarch’s love of corgis, more than 30 Melbourne corgis and their owners posed for photos in front of Flinders Street Station when it was lit up for the jubilee on Sunday night.

“She’s made corgis a recognisable breed and put them into the public consciousness over a very long period of time,” said Mathieson, 40, of Fitzroy North.

And being on the throne for 70 years was an incredible milestone worth celebrating, she said. 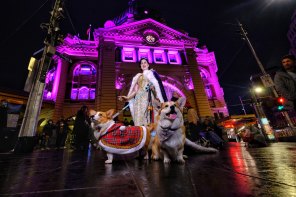 “I think it’s an amazing achievement, particularly as a woman to be in that position for such a long time, and what that represents.

“I think it’s something for women, particularly in leadership positions, that should be celebrated.” 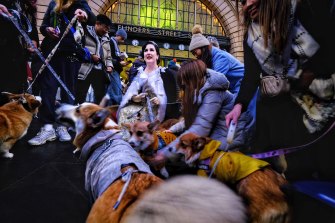 The photo shoot was about “paying tribute to her majesty the Queen”.Credit:Luis Enrique Ascui

Katie Hall, 33, of Belgrave, dressed as the Queen for the occasion, wearing a coronation-style robe, ballgown and tiara while flanked by corgis Cheddar and Kiwi, who belong to a friend.

“My own corgi is afraid of trams, so he’s at home.”

The photo shoot was about “paying tribute to her majesty the Queen, on her Platinum Jubilee”, Hall said. “I’ve been a corgi owner for the last 10 years. I’m also a bit of a royalist. I love everything to do with the royal family.”

Of the Queen, Hall said: “I love her. She’s a tenacious and kind-hearted woman. I think all corgi owners are inadvertently royalists.”

The photo shoot was also about the corgi owner community coming together in friendship.

“I’d love the Queen to see how glamorous and wonderful our corgi community is here in Melbourne, and how plentiful we are as well,” Hall said.

Your essential guide to the best things to see and do in and around the city. Sign up to our Culture Fix newsletter here.