A driver has died in a crash involving three trucks near the Victoria-South Australian border, where COVID-19 travel restrictions were reimposed overnight.

Victoria Police investigators have been told a truck crashed into the rear of another stationary truck at 2.20am on Thursday morning, two hours after South Australian authorities slammed the border shut in response to a growing COVID outbreak in Melbourne. 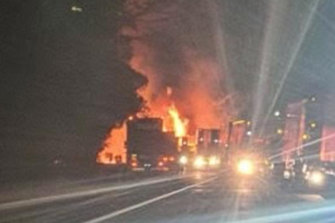 A witness photo of a fiery crash that killed a truck driver at the Victoria-South Australia border overnight.Credit:3AW

During a traffic jam at the border, the stationary truck then collided with another truck in front of it and all three trucks caught fire.

South Australia Police confirmed officers were manning the checkpoint on the Western Highway at Serviceton, just a few kilometres from the border when the collision occurred.

The driver of the first truck died at the scene and has yet to be formally identified.

Emergency crews and investigators were at the scene on Thursday morning, with the Western Highway expected to stay closed in both directions until at least Thursday evening.

South Australia-bound traffic is being detoured 150 kilometres via the Wimmera Highway from Horsham.

Paul Freestone, managing director of Freestone’s Transport, said he understood from drivers at the scene that there were only three police officers on duty at the checkpoint.

“There were 150 cars and it [the line] was all the way back to Kaniva,” he told Melbourne radio station 3AW. [A truck driver] came along and he didn’t realise they were all stopped and he was also carting chemicals.

“There’s absolutely no reason for these trucks to be stopped,” he said, crying.

“We went through this with the New South Wales border, we fought tooth and nail to get a corridor for the trucks to go through.“

On the South Australian side of the border, the Dukes Highway will also be closed for several hours due to the crash.

The South Australian Police Commissioner is expected to speak alongside Premier Steven Marshall on Thursday afternoon.

Anyone who witnessed the incident or has dashcam footage is urged to contact Crime Stoppers on 1800 333 000 or submit a confidential report at www.crimestoppersvic.com.au