Trump, agent of chaos, drives first debate into a ditch Washington: As a means of helping American voters understand the policy differences between the two major party candidates, the first US presidential debate was an epic and demoralising failure.

As a representation of a democracy and global superpower in deep trouble, and possibly long-term decline, it was a vivid portrait.

Donald Trump didn't come to Cleveland, Ohio, to debate. He came as a chaos agent on a mission to taunt, interrupt, bluster and bully. 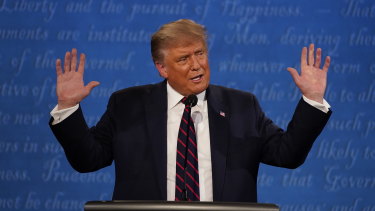 Trump was so unrelentingly aggressive that he risked turning off the voters he needs to win the election – especially moderate women in the suburbs.

For one-and-a-half hours of barely watchable television, the President was the nation's heckler-in-chief. Trump refused to observe the debate rules, declined to condemn white supremacists and demurred when asked to urge his voters to maintain calm if an election result is not known on November 3.

Trump's strategy was clear: dominate the stage, throw Biden off his game and block his opponent from making his case to the American people. 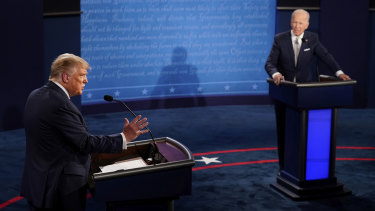 Attention-grabbing, yes, but will Trump’s debate performance help him with the voters he needs?Credit:AP

From that vantage point, he was largely successful. His supporters will relish his displays of defiance and norm-breaking. Undecided voters looking to learn about Biden's policies would have come out of the debate more confused than they went in.

But there was little to appeal to a key bloc of voters, moderate women in suburbs. They are not raging left-wingers but largely recoil at Trump's abrasive and at times crude behaviour.

Speakers at the Republican National Convention tried to appeal to broaden the party's appeal by softening Trump's image and making him seem more likeable. That looks to have been a pointless exercise given Trump's debate performance. He wasted an opportunity to project a sense of optimism about America's post-COVID future and emphasise his advantage on managing the economy.

While Trump is primarily responsible for the driving the debate into a ditch, moderator Chris Wallace deserves some of the blame. The Fox News host is a fair-minded and tough interviewer, but he proved incapable of enforcing the rules until the second half of the debate.

As for Biden, his performance will not go down in history as one of the greatest of all time. But he held his own – and certainly did enough to dispel any claims that he is senile or incapable or doing the job.

His best moments came when he tried to tune Trump out and speak directly to the American people.

"This isn't about his family or my family," he said, when Trump predictably attacked his son Hunter. “It’s about your family.”

It wasn't wise for Biden to go as far as calling Trump a "clown" given he is selling himself as a more mature and presidential alternative. But he also needed to show that he wasn't going to be pushed around.

Given Biden's strong lead in the polls, it was Trump who most needed to emerge with a thumping debate victory. He didn't achieve that. This was not a performance that will shift the dynamics of the presidential contest in his favour.

The first debate was a fundamentally unserious, unedifying display that will only reinforce the intense cynicism and dismay many Americans feel about the state of their politics.

Our weekly newsletter will deliver expert analysis of the race to the White House from our US correspondent Matthew Knott. Coming soon. Sign up now for the Herald‘s newsletter here, The Age‘s here, Brisbane Times‘ here and WAtoday‘s here.