President Donald Trump and Democratic nominee Joe Biden fought over the coronavirus crisis at the Tuesday night presidential debate by accusing each other of killing more people had the other been in office.

‘He panicked or he just looked at the stock market, one of the two, because guess what, a lot of people died and a lot more are going to die unless he gets a lot smarter, a lot quicker,’ Biden said onstage.

At another point Trump shouted it would have been Biden who’d have killed more – calling his response to swine flu pandemic in 2009 a ‘disaster.’ 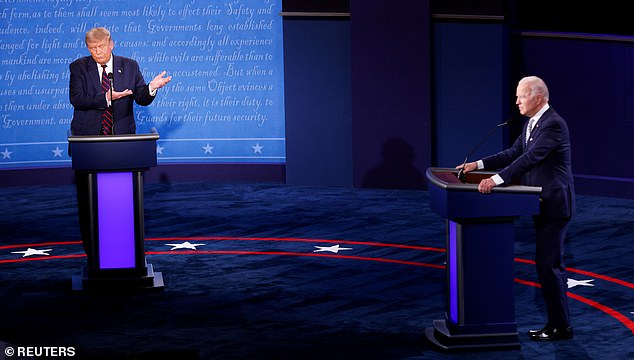 President Donald Trump (left) and Democrat Joe Biden (right) sparred over the coronavirus crisis at Tuesday night’s debate, suggesting the other one would have killed more Americans 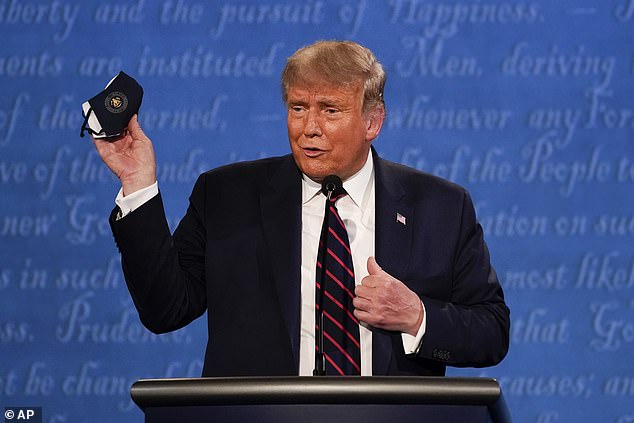 ‘If we would’ve listened to you, the country would’ve been left wide open, millions of people would’ve died. Not 200,000. And one person is too much. It’s China’s fault. It should’ve never happened,’ the president said.

Biden whacked Trump for coddling China in the early weeks of the pandemic, saying that the president didn’t push hard enough to letter American health experts in.

‘He did not even ask Xi to do that. He told us what a great job Xi was doing, he told us we owe him a debt of gratitute for being so transparent with us,’ Biden said.

Biden accused Trump of still not having a plan.

‘You should get out of your bunker and get out of the sand trap in your golf course and go in the Oval Office and bring together the Democrats, Republicans and fund what needs to be done now to save lives,’ Biden continued.

The ex-veep mocked Trump for saying the coronavirus would disappear ‘like a miracle.’

‘And maybe you can inject some bleach in your arm and that would take care of it,’ Biden also offered.

‘That was said sarcastically,’ Trump shot back.

Trump defended his coronavirus response and told the audience, ‘we’re weeks away from a vaccine.’ He also said of Biden’s leadership on COVID, ‘You don’t have it in your blood.’

‘Fox News Channel’s’ Chris Wallace pointed out to Trump that both the CDC Director, Dr. Robert Redfield, and the head of Operation of Warp Speed disputed the president’s timeline.

‘Well I’ve spoken to the companies and we can have it a lot sooner – it’s a very political thing,’ Trump said.

Biden said of Trump and a vaccine, ‘I don’t trust him at all, nor do you,’ he said looking into the television camera. ‘What we trust is the scientists.’

The conversation then turned to mask-wearing and campaigning.

The president said he didn’t mind mask-wearing – despite seldomly wearing one and mocking Biden for wearing his – even suggesting that some experts didn’t think they helped prevent COVID spread.

‘No serious person said the opposite,’ Biden interjected.

‘He did not say the opposite,’ Biden shot back.

Trump also said he was having large rallies ‘because people want to hear what I want to say,’ while Biden has kept campaign events small due to the pandemic and medical experts advising social distancing.

‘Because nobody will show up,’ Trump chuckled.

‘So far we’ve had no problem whatsoever,’ the president also claimed. ‘If you could get the crowds you’d do the same thing,’ Trump added, taking yet another shot at Biden.

Earlier on, when Biden said Trump wasn’t smart, the president shot back, ‘Don’t ever use the word smart with me.’

Trump then pointed out how Biden had attended the University of Delaware and ‘graduated either the lowest or almost the lowest in your class.’