Trump promotes ‘patriotic education’ in appeal to conservative base

Washington: President Donald Trump says he plans to establish a commission to promote "patriotic education" in the United States, taking issue with efforts to highlight the country's history of slavery and racism.

In remarks delivered at the National Archives, which houses the US Constitution, Bill of Rights, and Declaration of Independence, Trump railed against people who have taken to the streets around the country this year to protest racial injustice. 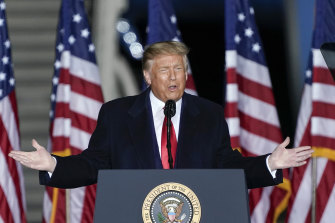 President Donald Trump speaks at a campaign rally at the Central Wisconsin Airport on Thursday.Credit:AP

Republican Trump has sought to portray himself as a law and order candidate in the November 3 election against Democratic rival Joe Biden and his announcement on Thursday, US time, to use an executive order to establish the commission could also be a move to appeal to his base.

Trump said "left-wing mobs" had torn down statues, desecrated memorials, and carried out a "campaign of violence and anarchy."

"Whether it is the mob on the street, or the cancel culture in the boardroom, the goal is the same: to silence dissent, to scare you out of speaking the truth, and to bully Americans into abandoning their values, their heritage, and their very way of life," Trump said.

"We are here today to declare that we will never submit to tyranny. We will reclaim our history and our country for citizens of every race, colour, religion, and creed."

Trump is trailing Biden in national opinion polls. Biden has also condemned looting and violence that have been part of some anti-racism protests.

Trump said the commission would "encourage our educators to teach our children about the miracle of American history."

"America’s founding set in motion the unstoppable chain of events that abolished slavery, secured civil rights, defeated communism and fascism, and built the most fair, equal, and prosperous nation in human history," he said.