Home » Trump remains banned from Facebook after board upholds suspension

Trump remains banned from Facebook after board upholds suspension

But the board criticised Facebook for imposing an “indeterminate and standardless penalty of indefinite suspension”, saying the company must decide whether to allow Trump back on the platform or ban him permanently within six months. 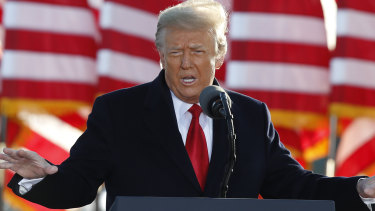 The verdict means Trump will remain barred from Facebook for the time being, but it will ultimately be up to chief executive Mark Zuckerberg to decide whether Trump can return to the platform ahead of another potential run for the White House in 2024.

In a statement, Trump did not address the decision directly, but said that actions by Facebook, Twitter and Google were “a total disgrace and an embarrassment to our country. These corrupt social media companies must pay a political price.”

He did not provide any evidence of corruption.

German chancellor Angela Merkel and Russian dissident Alexei Navalny were among the global figures who criticised the social media giants’ decisions, saying they represented a dangerous precedent for free speech.

“The Board found that, in maintaining an unfounded narrative of electoral fraud and persistent calls to action, Mr Trump created an environment where a serious risk of violence was possible,” the oversight board wrote in their decision.

“At the time of Mr Trump’s posts, there was a clear, immediate risk of harm and his words of support for those involved in the riots legitimised their violent actions.

“Given the seriousness of the violations and the ongoing risk of violence, Facebook was justified in suspending Mr Trump’s accounts on January 6 and extending that suspension on January 7.”

The oversight board is a 20-person panel including former political leaders, human rights activists and journalists selected by Facebook to review the company’s content decisions.

The board said that, where possible, Facebook should use “less restrictive measures to address potentially harmful speech and protect the rights of others before resorting to content removal and account restriction”.

“Facebook must, within six months of this decision, reexamine the arbitrary penalty it imposed on January 7 and decide the appropriate penalty,” the board said.

“This penalty must be based on the gravity of the violation and the prospect of future harm. It must also be consistent with Facebook’s rules for severe violations which must in turn be clear, necessary, and proportionate.”

In a tweet the Republican members of the House Judiciary Committee described the decision as “pathetic” while Republican congressman Jim Jordan called for Facebook to be broken up.

Republican congressman Jim Banks said: “This is a dangerous and reckless decision and sends a clear signal to conservatives using social media – you’re not welcome here.”

On Wednesday (AEDT) Trump launched a new website designed to evade the social media bans that allows his followers to share his posts to their social media pages.