New York: US President Donald Trump has heaped praise on Recep Tayyip Erdogan during a visit by the Turkish leader to the White House, complimenting the strongman on his "strong relationship" with the Kurds.

The meeting came just a month after Turkey launched an offensive against Kurdish fighters in north-eastern Syria following Trump's announcement that he would pull American troops out of the region. Turkey views Kurdish groups as terrorists because of their links to the banned Kurdistan Workers Party.

Several of Trump's most loyal Republican allies criticised the decision as a “catastrophic mistake”, and said it would allow the Islamic State to regroup in the area. 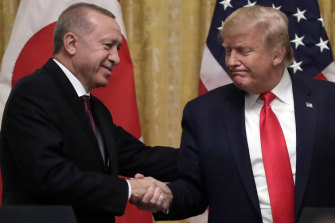 Trump said on Wednesday (Thursday AEDT) that Turkey is keeping IS in check and the subsequent ceasefire with the Kurds is "holding very well".

Trump said the only remaining US troops in the region were focussed on protecting oil supplies.

"We’re keeping the oil. We have the oil. The oil is secure," he said.

"I'm a big fan of the President," Trump said, standing beside Erdogan at a press conference in Washington.

"I will say that we’ve had a great relationship with the Kurds, and we fought with them very successfully against ISIS.

"And by the way, I think the President, he may have some factions within the Kurds, but I think the president has a great relationship with the Kurds."

Trump said that many Kurds in Turkey are "happy and taken care of … including health care and education and other things".

The meeting with Erdogan coincided with the beginning of public impeachment hearings into Trump's dealings with Ukraine.

Kurds in northern Syria were highly critical of Trump’s decision to withdraw US forces.Credit:Kate Geraghty

The meeting followed an extraordinary public confrontation between the pair in October, which saw Trump send an excoriating letter to the Turkish leader urging him not to be a "fool" and a "tough guy" and threatened fresh economic sanctions.

The letter was made public following criticism of Trump's decision to withdraw US forces from a 32km zone ahead of a Turkish assault. The withdrawal allowed Turkey to to enter direct confrontation with Kurdish forces who had been allied with the US in the fight against IS.

Earlier this week, a group of Democratic and Republican politicians called on Trump to cancel the meeting with Erdogan because of his actions in Syria.

In a statement issued on Wednesday, Republican Senate leader Mitch McConnell said he "shared my colleagues’ uneasiness at seeing President Erdogan honoured at the White House"

But he added: "I urge this body to remain clear-eyed about our nation’s vital interests in the Middle East and the fact that advancing them will mean strengthening our relationship with this NATO ally, not weakening it further." 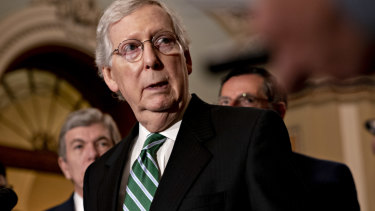 Republican Senate Leader Mitch McConnell said he had concerns about Trump’s decision to invite the Turkish President to a White House meeting.Credit:Bloomberg

According to the Committee to Protect Journalists, under Erdogan Turkey has jailed more journalists for their work than any other country in the world over the past three years.

In 2018 an estimated 68 journalists were held in prison in Turkey, followed by 47 in China and 25 in Egypt.

According to Human Rights Watch, the new presidential system implemented by Erdogan "lacks sufficient checks and balances against abuse of executive power, greatly diminishes the powers of parliament and consolidates presidential control over most judicial appointments".