‘I’m not into golden showers’: Trump bizarrely brings up Steele dossier at private dinner with donors and GOP senators and says Melania ‘didn’t believe’ pee tape allegations made against him

Donald Trump reportedly made an unprompted reference to allegations in the Steele dossier that he hired Russian prostitutes to pee on him in a Moscow hotel during a private GOP dinner on Thursday.

He was speaking at a high-dollar retreat in Palm Beach, Florida for the National Republican Senatorial Committee, a group working to elect more GOP senators to Congress.

‘I’m not into golden showers,’ Trump told his audience of GOP senators, donors, lobbyists and strategists.

He then seemed to bring up former First Lady Melania Trump and claimed she doubted the salacious claim in the former British spy’s report.

‘You know the great thing, our great first lady – “That one,” she said, “I don’t believe that one”,’ Trump said according to the Washington Post.

He decried Democrats’ Russia investigation and impeachment efforts in a profanity-laced tangent. 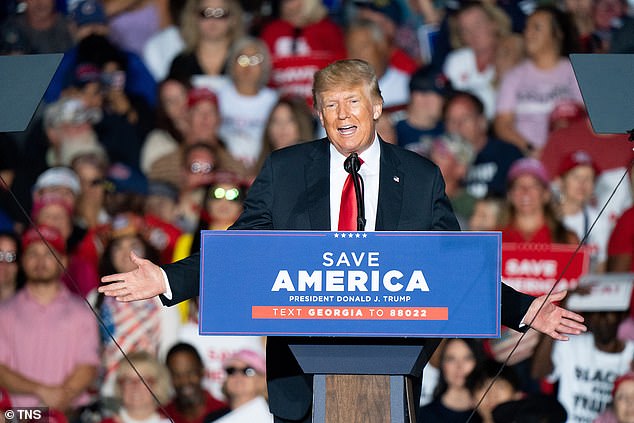 Christopher Steele is a former MI6 agent who was retained by Fusion GPS in 2016, when the company was hired by the 2016 Clinton campaign to perform opposition research on Trump.

What emerged was a dossier of 17 reports detailing Trump’s alleged ties to Russia and a conspiracy to influence the election.

Steele spoke with ABC News anchor George Stephanopoulos for his new documentary series Out of the Shadows.

His interview, which the Good Morning America anchor boasted was his first televised appearance since the dossier’s release, will air on Monday.

To date Trump himself hasn’t been implicated of conspiring with the Russian Federation although members of his orbit have been charged and indicted for improper foreign ties. 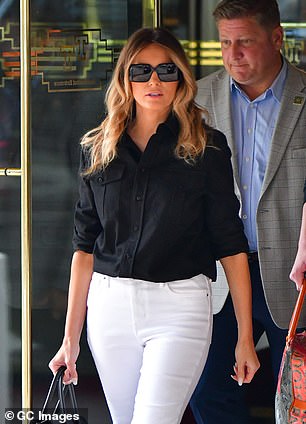 But at the Thursday dinner the ex-president did flaunt his close relationship with Russian President Vladimir Putin, and praised Chinese President Xi Jinping’s intelligence.

Trump told his crowd on the last day of the VIP retreat that the Senate Majority Leader and House Speaker were ‘maniacs’ and reportedly compared his presidency to a fight for survival.

He said Democrats ‘cheat like hell, and they stick together.’

‘The Republican Party has to stick together,’ Trump told them, implying that he should be at the helm of that unification.

In a recording of the event obtained by the Post, Trump told Republicans that he saved the party from near-catastrophe and helped Republicans keep control over their Capitol Hill seats – never mind that the GOP lost the presidency, the House and the Senate by early 2021.

‘It was a dying party, I’ll be honest. Now we have a very lively party,’ he told the audience.

He saved some criticism for some of his fellow Republicans as well, venturing to go after GOP senators at an event promoting their party’s re-election.

Trump name-checked Utah Senator Mitt Romney and Nebraska Senator Ben Sasse, two of of the seven GOP senators who voted to impeach him after the Capitol riot.

The ex-president also repeated his baseless claims that the 2020 election was stolen out from under him.

‘It’s a terrible thing what they did in Georgia and other states,’ Trump said.

‘You look at Texas, you look at a lot of states – they are correcting all the ways we were all abused over the last election,’ Trump said. ‘Last two elections, if you think about it.’

And while he hasn’t formally entered the 2024 race yet, the former president has fueled suspicions he would launch another presidential bid through various campaign rallies and hints dropped in interviews.

But despite the ambiguity, he’s still a clear kingmaker in the Republican party.

The package touted a ‘closed-door, in-person strategy meeting with Trump’ and asked people to sign up to support Trump’s ‘social media site’ – without elaborating on the yet-nonexistent page.