Donald Trump tells rally Soleimani wanted to blow up MULTIPLE American embassies, claims Democrats would have ‘leaked’ strike plans to kill the general and is interrupted twice by protesters

‘Soleimani was actively planning new attacks and he was looking very seriously at our embassies, and not just the embassy in Baghdad,’ Trump told the crowd in Toledo, Ohio Thursday night.

The first rally of the year comes less than a week after Soleimani was killed, which led Iran to launch almost two dozen ballistic missiles at bases in Iraq that house U.S. troops, but no Americans were wounded or killed.

The drone strike on Soleimani followed a New Years Eve breach of the U.S. Embassy in Baghdad, Iraq by protesters who support Iranian-backed Shia militia.

Trump now insists that Soleimani was planning more attacks on American embassies before he was taken out.

‘He ordered the violent assault on the American Embassy in Baghdad,’ he continued of the Iranian military leader, calling the response the ‘anti-Benghazi.’ 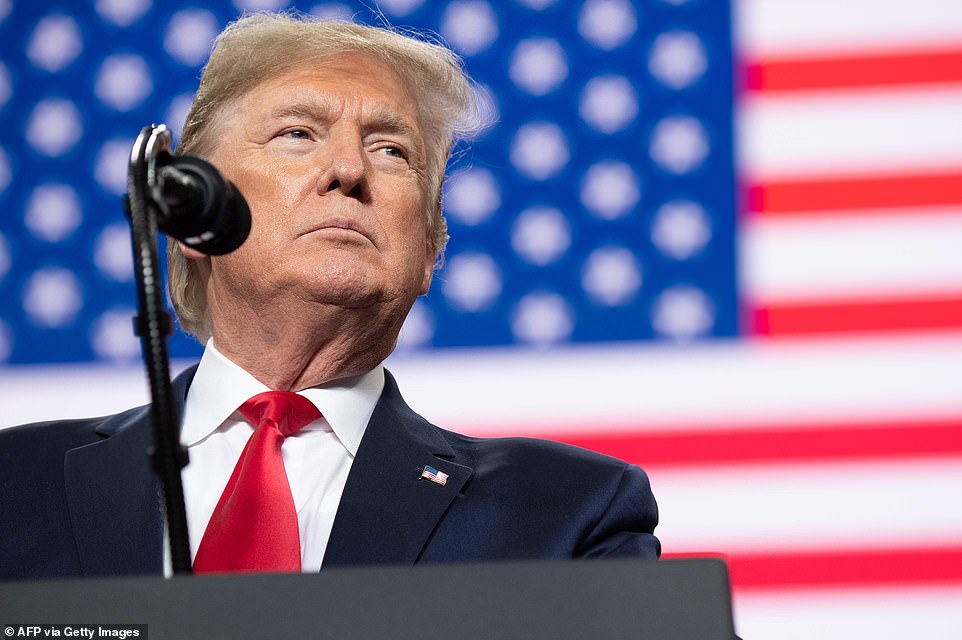 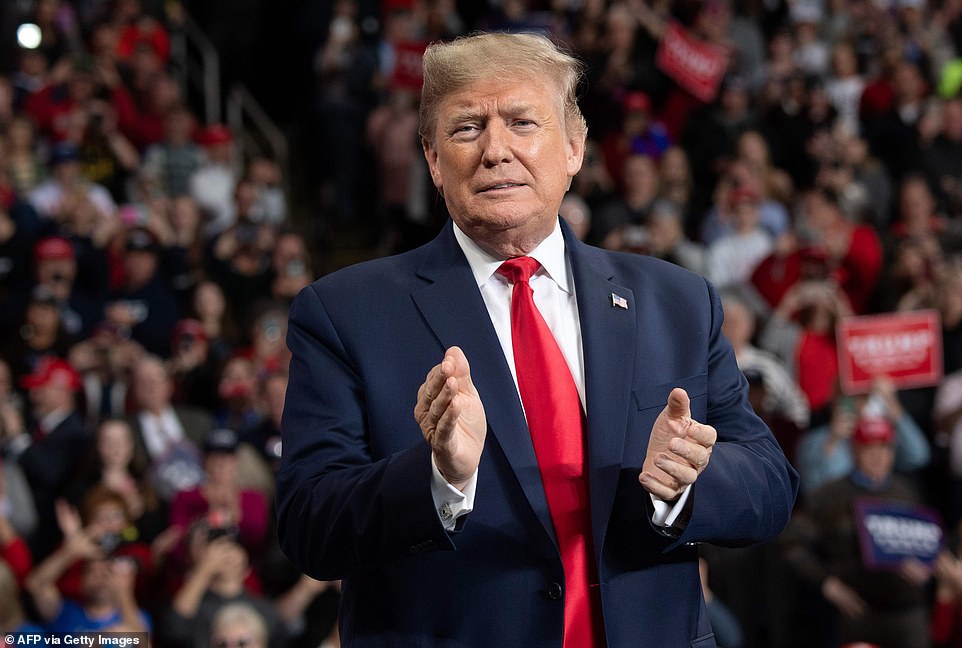 He used the rally to tout ordering the drone strike that took out Iranian General Qassem Soleimani on Friday, and said the terrorist leader was planning more attacks on American Embassies other than the one carried out New Years Eve on the U.S. Embassy in Baghdad 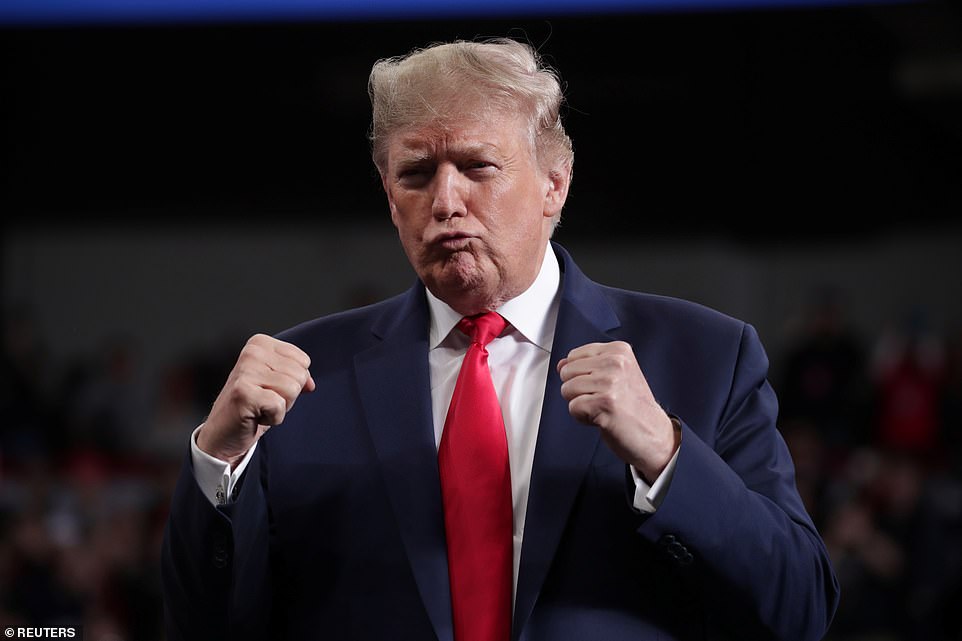 ‘Soleimani was actively planning new attacks and he was looking very seriously at our embassies, and not just the embassy in Baghdad,’ Trump said at the rally in the rust belt swing state that voted for him in 2016 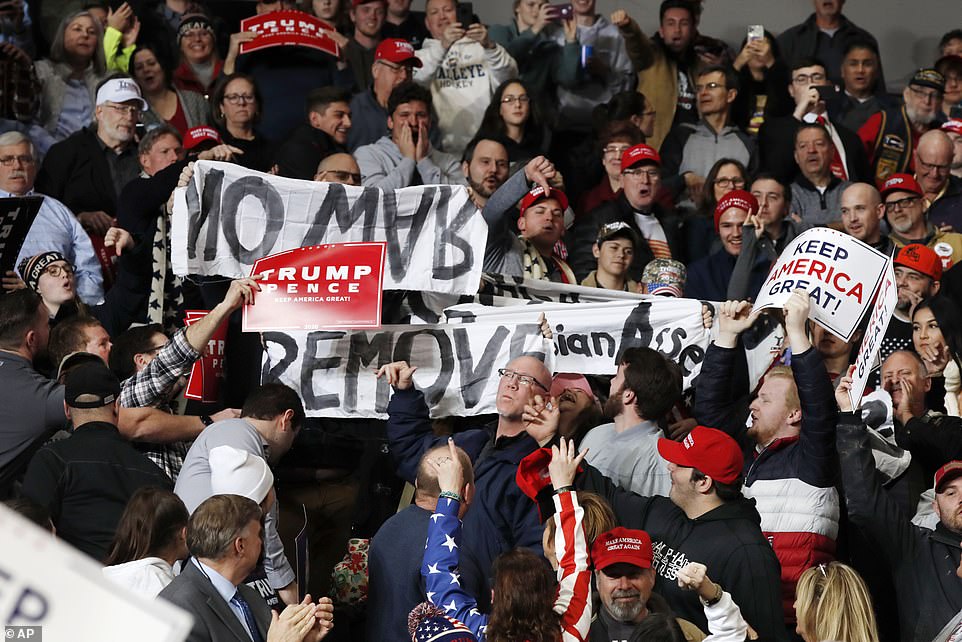 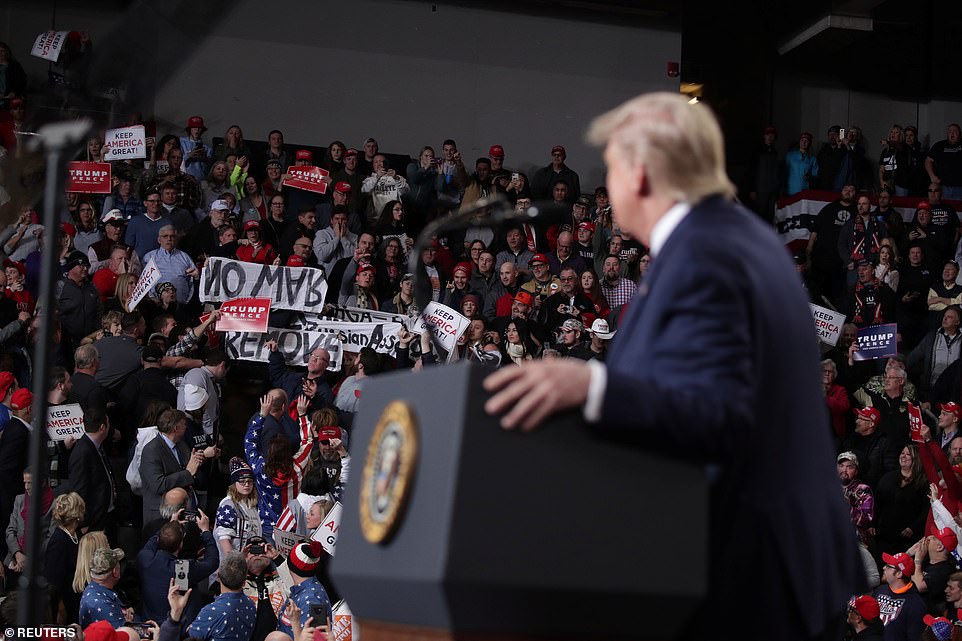 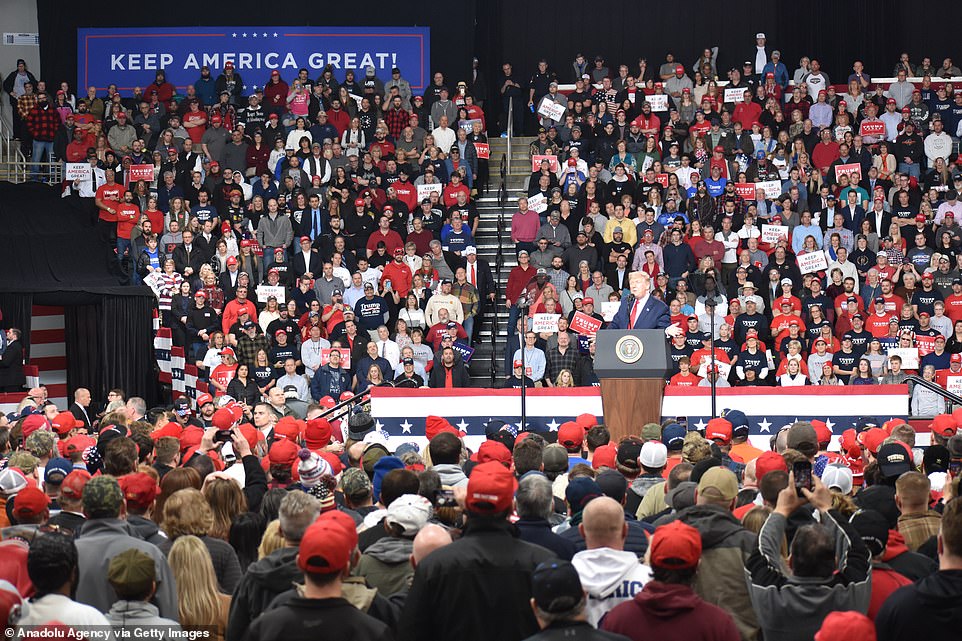 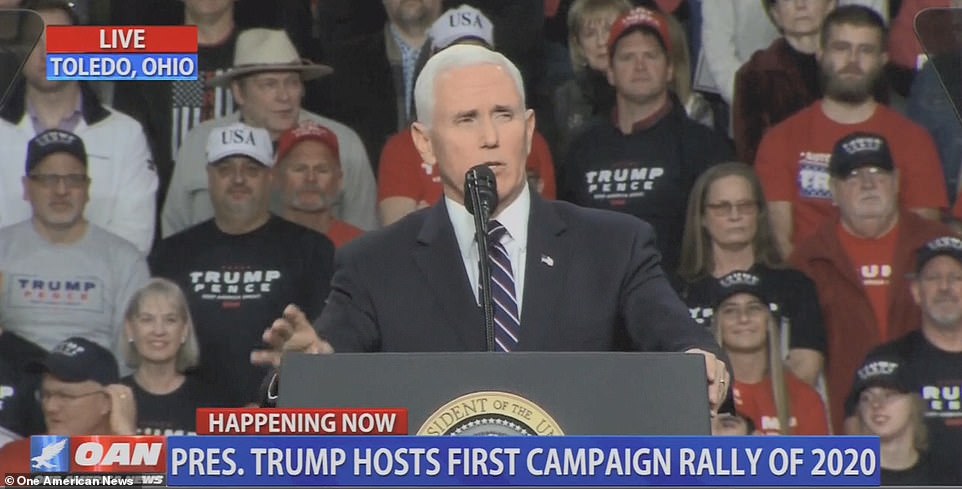 Vice President Mike Pence warmed up the crowd by listing Trump’s accomplishments, including the attack that took out Soleimani

The attack led to a media frenzy and social media speculation that the world would spiral into World War III as tensions continued to rise.

The rally was interrupted twice by anti-war protesters holding signs written on sheets that said ‘NO WAR,’ ‘MAGA=HATE’ and ‘REMOVE’.

Democrats insist the move was hasty and claim there wasn’t adequate intelligence to justify killing Soleimani, but Trump says they should be happy he’s dead.

‘And yet, now I see, the radical left Democrats have expressed outrage over the termination of this horrible terrorist. And you know what, instead they should be outraged by Soleimani’s savage crimes, and that fact that his countless victims were denied justice for so long,’ Trump said.

Democrats have lambasted Trump for directing the strike without first notifying Congress, but the president said at the rally Thursday that if he would have told Congress, they would have leaked the attack before it was carried out.

The crowd cheered and booed at Trump’s mention of the ‘fake news,’ one have his most often targets.

‘That’s a lot of corruption back there, folks,’ Trump said, pointing to the back of Huntington Center where media are set up to cover the rally.

Pence focused his introduction on praising the president for his fast action in directing the strike that took out Soleimani. 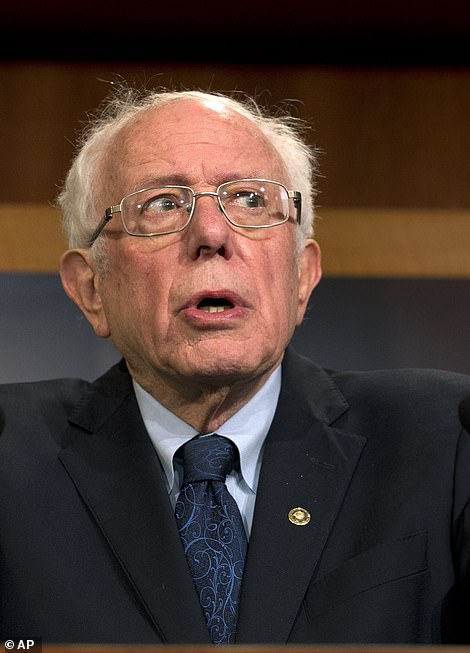 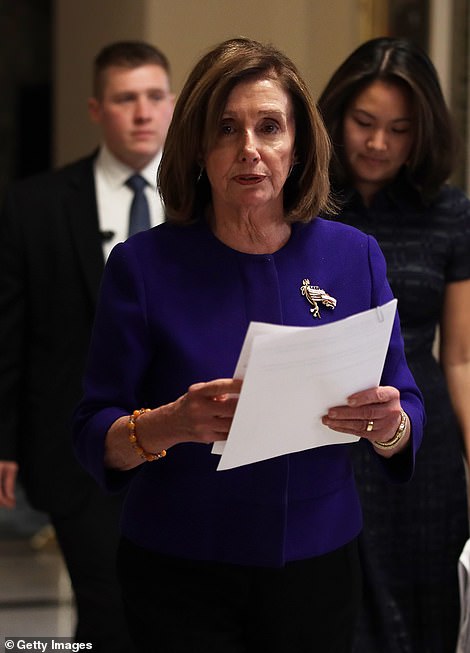 Trump said he did not notify Congress before carrying out the strike because he claims they would have leaked it to the media. He specifically attacked 2020 candidate Senator Bernie Sanders and House Speaker Nancy Pelosi 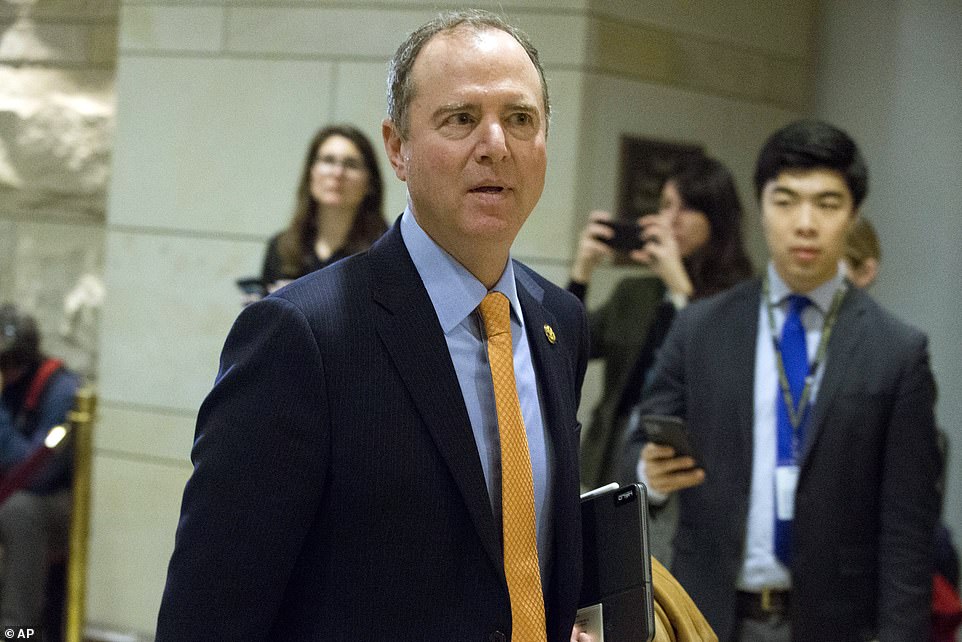 Trump also said Adam Schiff, who he calls ‘pencil neck,’ would have leaked the story. ‘Schiff is a big leaker, you know. He leaks to crazy CNN,’ Trump accused of the House Intelligence chair

Trump also said Democratic Representative Adam Schiff, who chairs the Intelligence Committee and headed the House impeachment investigation, would have leaked the information.

‘They’re so pathetic. So they want us to call them. Now, Schiff is a big leaker, you know. He leaks to crazy CNN,’ Trump said. ‘Not too many people are watching CNN. But he leaks!’

‘So he’ll say: ‘You know, uh, off the record – I got to hurry up because everyone’s watching me in the hallway on my cell phone – off the record, they’ve got the No. 1 terrorist in the world – Soleimani. And they’re going to get him, they’re going to take him out in the next 10 minutes. Please, don’t tell anyone I told you,” Trump said, imitating Schiff leaking the story to CNN.

Before heading to the rally he touted his approval rating among Republicans on Twitter and said he was going ‘for a big 2020 sin.’

‘Heading to Toledo, Ohio, for first Rally of the year. Tremendous crowd. Here we go for a big 2020 Win!’ Trump tweeted as he flew aboard Air Force One to the swing state.

‘95% Approval Rating in the Republican Party. Thank you!’ he wrote in another tweet.

Ahead of the rally, Trump touted Republican approval and said he was going ‘for a bug 2020 win!’

‘Donald Trump took big action and Qassem Soleimani is gone,’ he cheered, and was met with chants of ‘U.S.A’ from the pro-Trump crowd.

‘And when militants stormed our embassy in Baghdad, President Trump sent in the Marines, secured our embassy and this president said, ‘No more Benghazis.’ And when American lives were threatened by the most dangerous terrorist in the world, President Donald Trump took action and Qassem Soleimani is gone,’ Pence said.

‘Now the president said yesterday in his words the United States is always ready to embrace peace with all who seek it. But under this president, America will always seek peace through strength,’ he continued, reminiscent of the Ronald Reagan foreign policy strategy.

Trump will fly to Milwaukee, Wisconsin on Tuesday for his second rally of the election year on the same night Democrats hold their first primary presidential debate of 2020 in Des Moines, Iowa.

Milwaukee is also the location of the 2020 Democratic National Convention, which will take place in July.

Hillary Clinton did not campaign in Wisconsin, another rust belt swing state, during the 2016 general election against Trump – and ultimately, feeling ignored, the state turned from blue to red with less than 1 per cent more voters opting for Trump.

Trump brought up some potential Democrats he could face in the 2020 general election, including former Vice President Joe Biden, who the president says he hopes he goes up against. 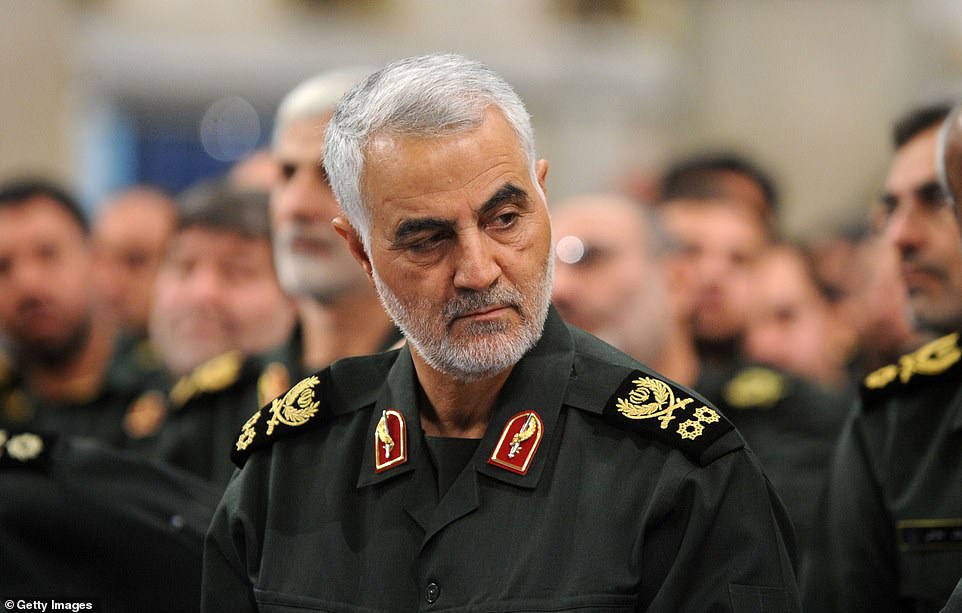 Iranian terrorist military leader Qassem Soleimani (pictured) was killed Friday at an airport in Baghdad, Iraq by a drone strike ordered by the president. Trump’s defense and national security officials have claimed Soleimani’s threat against the U.S. was ‘imminent’

‘I sort of hope it’s Joe because he will hear ‘where’s Hunter’ every single debate, nine times a debate,’ Trump said to a roaring crowd.

The frontrunner 2020 candidate’s son, Hunter, was on the board of Ukrainian natural gas firm Burisma holdings from 2014-2019.

Trump held a call with Ukrainian President Volodymyr Zelensky over the summer where he urged his Eastern European counterpart to investigate potential corruption in regards to Hunter’s position and his father’s involvement.

That conversation led to the Democrats filing two articles of impeachment against the president in late December: abuse of power and obstruction of Congress.

The president still denies any wrongdoing and instead claims Congress should be looking into the Bidens business dealings in Ukraine.

He also trashed Democrats running in the 2020 primary, claiming their debate are much lower than the ratings were when he was on the debate stage against Republican challengers in the 2016 primary. 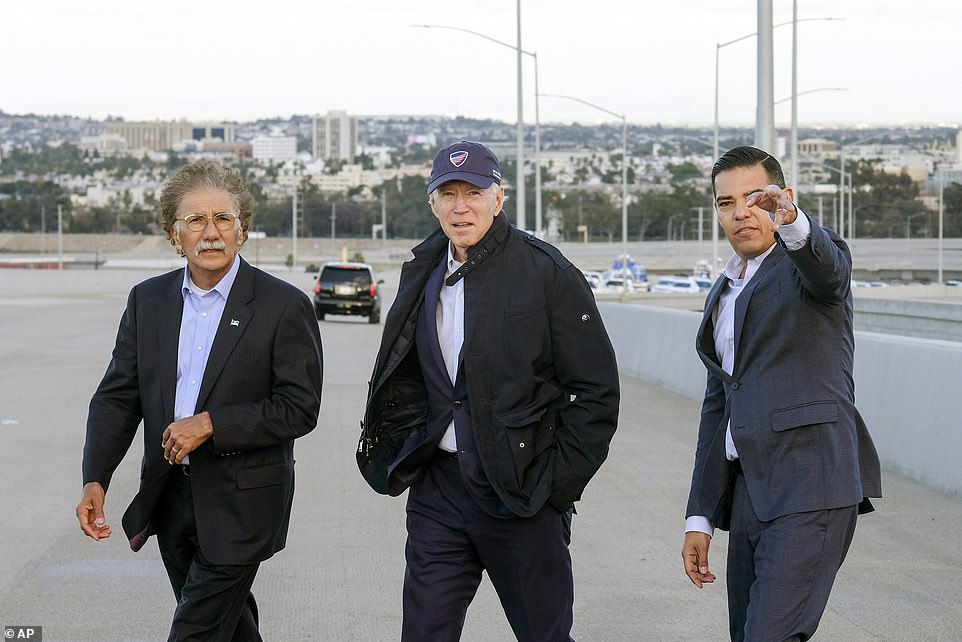 Trump criticized the Democratic primary field, but focused mainly on former Vice President Joe Biden, who he said he hopes he goes up against. ‘Biden doesn’t know the difference between Iran and Iraq. He’s gotten it wrong four times,’ Trump said at the rally 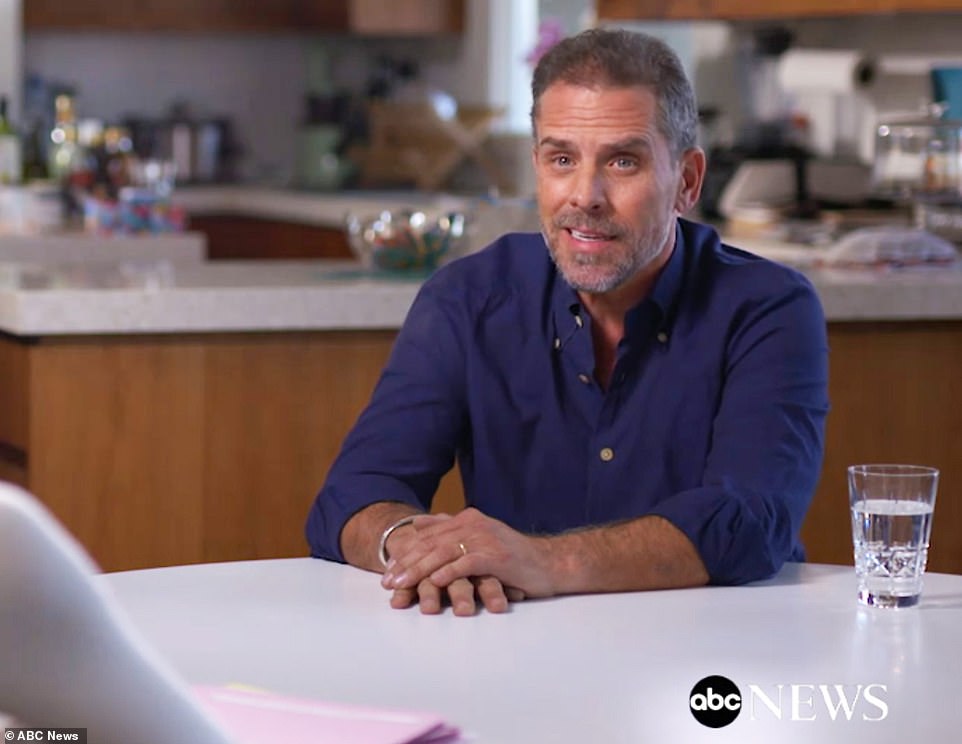 He also claimed if Biden was the nominee, he would hear ‘Where’s Hunter’ nine times at every debate in reference to his son Hunter Biden’s (pictured) position with a Ukrainian natural gas firm from 2014-2019 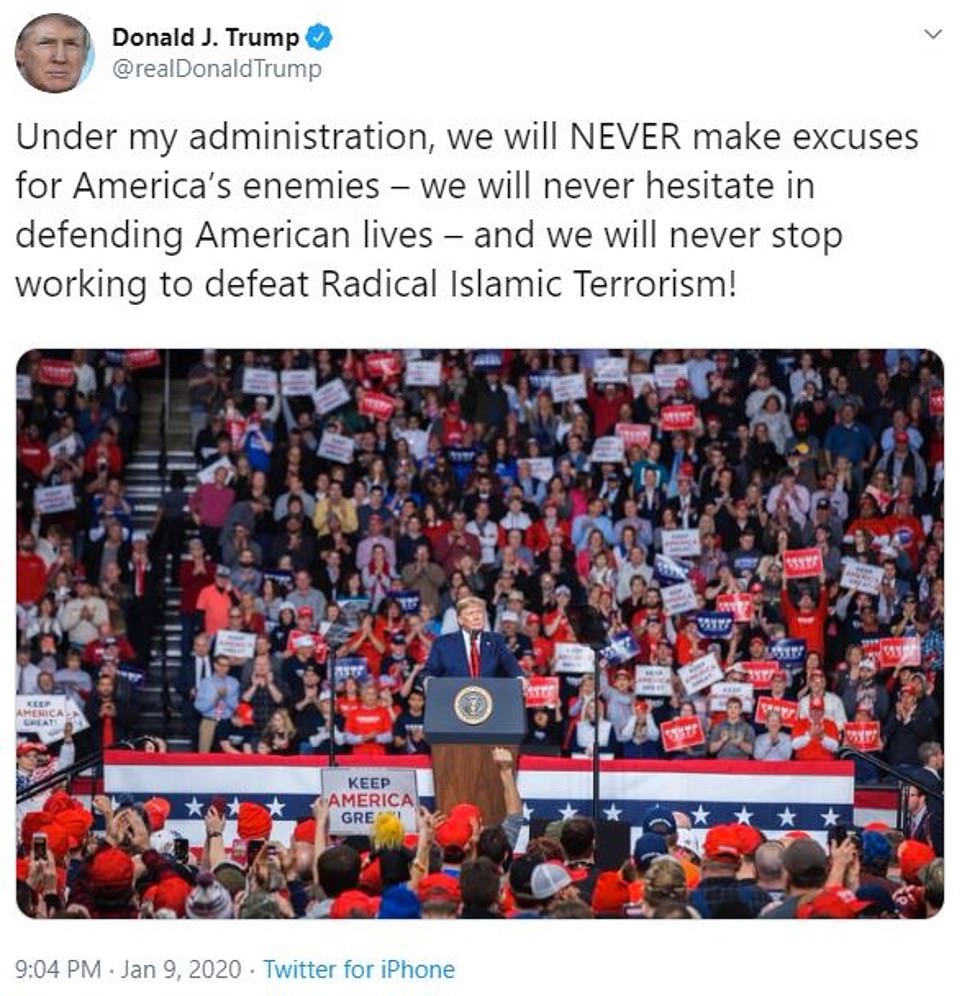 Trump tweeted after the rally concluded 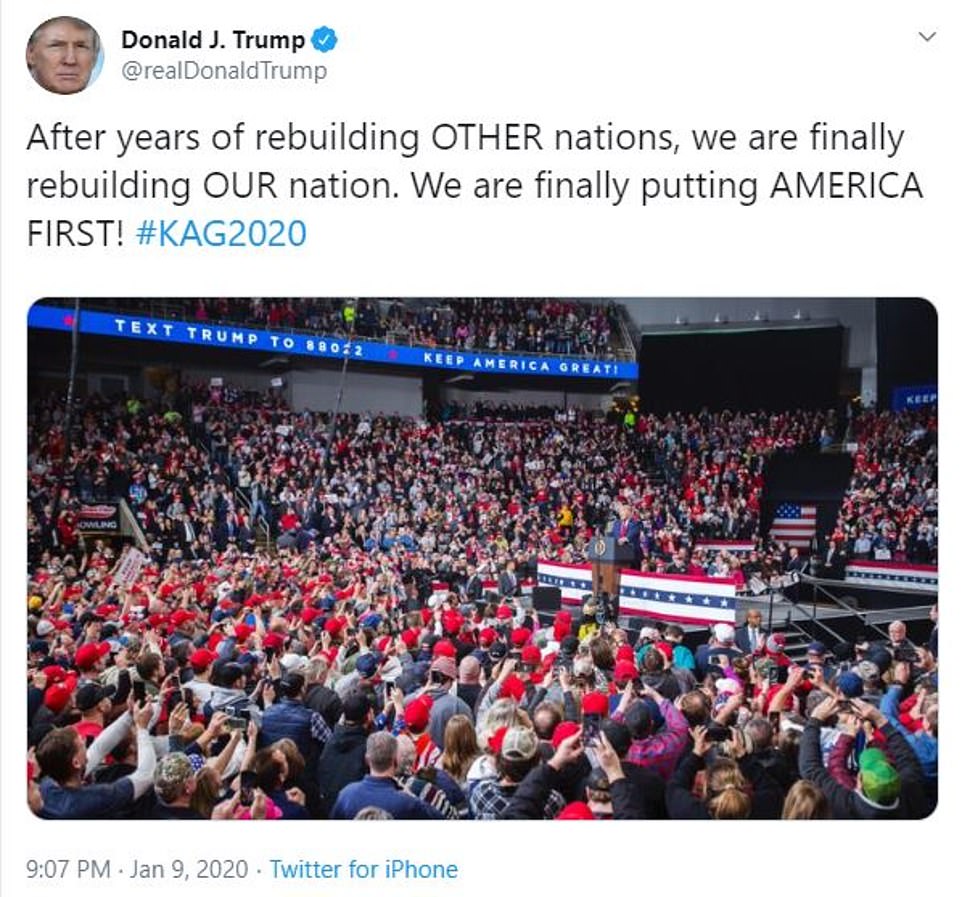 He said his administration is ‘putting AMERICA FIRST!’

‘We never missed center stage in the debates. Remember those great debates? We actually got high rating. They don’t get very good ratings anymore. They’re like – it’s like death,’ Trump said.

The first 2020 Democrat debate will be on the same night of Trump’s second Keep America Great rally of the year.

‘Watching – I should watch. You know, I’m supposed to watch, it’s like my job. Try and watch. Watch the competition. But, it’s like watching death. Those debates are boring. They’re boring. You got to sit through those things for two or three hours – you’ve got to be really committed to the country to do that,’ Trump said, and was met with laughter.

‘And you have some real beauties. You see what Pocahontus is slipping badly,’ Trump said, using his offensive nickname for Massachusetts Senator Elizabeth Warren.

Warren claimed on law school and professorship applications and documents that she was of Native American heritage.

In 2018 she took a DNA test, after much chiding from Trump over her aboriginal claims, and the results showed she is as little as 1/1024th Native American.

‘Bernie’s – crazy Bernie – he’s surging. And Biden doesn’t know the difference between Iran and Iraq. He’s gotten it wrong four times,’ he continued in rounding up his criticism of the top three Democratic candidates.

He finished his criticism of the Democratic crowd by lambasting former South Bend, Indiana Mayor Pete Buttigieg, claiming ‘nobody has any idea how the hell to say his name.’

Following the rally, Trump continued his criticism of the Democratic field, which has narrowed to 14 contenders from a high of more than two dozen.

‘Democrats are now the party of high taxes, high crime, open borders, late-term abortion, socialism, and blatant corruption,’ Trump tweeted as he headed back to D.C. ‘The Republican Party is the party of the American Worker, the American Family, and the American Dream! #KAG2020’

Trump also tweeted his thanks to Toledo, Ohio after the rally concluded.

‘Under my administration, we will NEVER make excuses for America’s enemies – we will never hesitate in defending American lives – and we will never stop working to defeat Radical Islamic Terrorism!’ he said in a second tweet.

He also claimed it was time for the U.S. to focus on putting ‘American first.