The coronavirus pandemic had a devastating effect on people’s mental health throughout 2020 and 2021.

This led to a significant rise in the number of alcohol-related deaths, according to a March 2022 study from the Journal of the American Medical Association (JAMA), which found the number of deaths between 2019 and 2020 rose by a whopping 25.5%.

Additionally, the rate of alcohol-related deaths outpaced the rate of deaths from all causes, with no major disparities between males and females and different age groups. 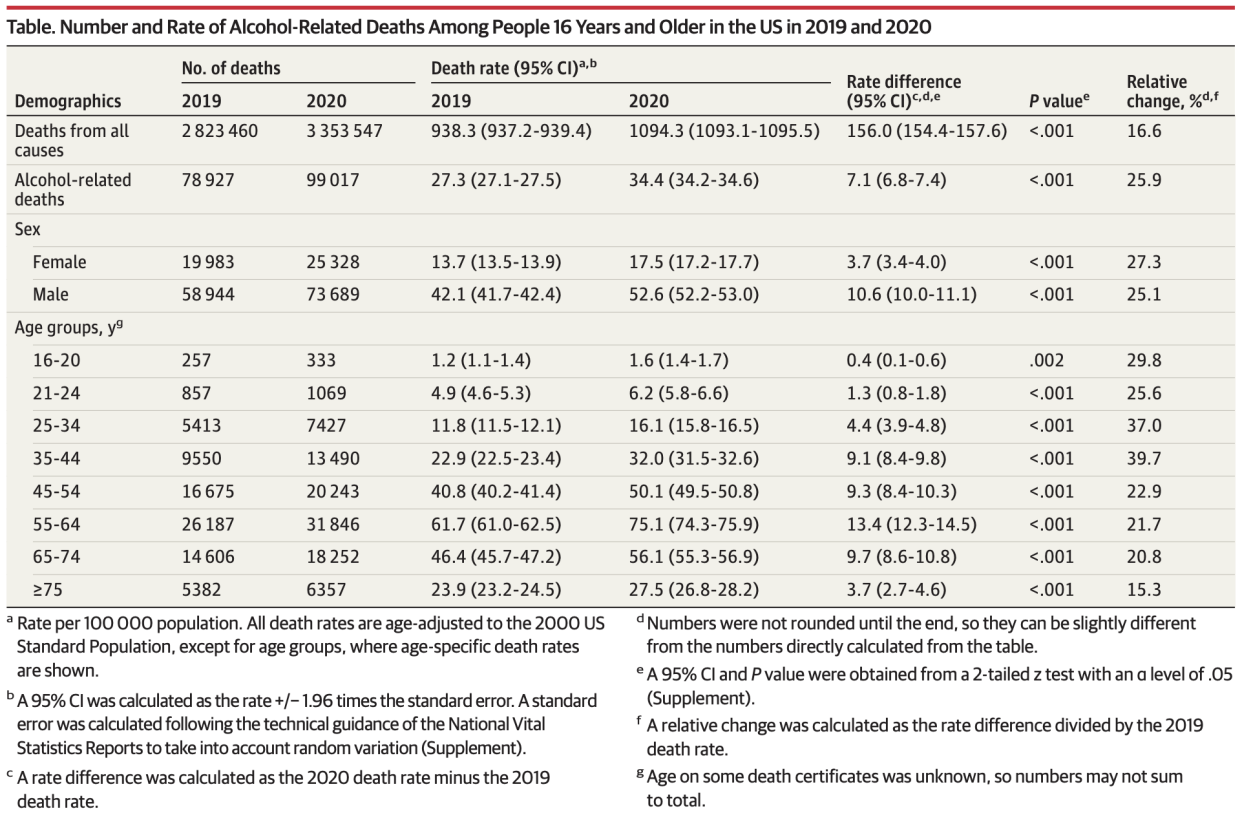 In 2019, there were a total of 78,927 alcohol-related deaths. That number jumped to 99,017 in 2020. However, Aaron White, co-author of the report and senior scientific advisor to the director at the National Institute on Alcohol Abuse and Alcoholism, estimates that the number is likely higher than reported.

“Each state differs in how good of a job they do of testing people’s blood for alcohol,” White told Yahoo Finance. “These aren’t absolute numbers. The actual number of deaths from alcohol in the U.S. is way higher than what we report because we base it just on death certificates and we know that death certificates capture only a percentage. What that means is at a state level, these numbers are going to vary depending on how good of a job a state does.”

Three states saw an increase in the number of deaths by more than 45%: Utah, South Dakota, and Mississippi.

“It’s unprecedented,” White said. “We know that any time there’s a major crisis, whether it’s national or regional, the U.S. and other countries see an uptick in mortality from alcohol. We know that’s a pattern that happens but to see such a large increase in one year, it was very stunning to us. It’s not directly related to the pandemic."

White also said "there’s no reason that a virus sweeps through a population that you would necessarily have to see an increase in deaths from alcohol."

"It’s clearly a secondary effect of the pandemic and it tells us there’s a lot … that happened that goes well beyond the virus itself," he added.

As the report noted, some of the driving factors behind this increase involve how people coped with the pandemic through 2020, which saw people in isolation, schools and offices closed, and hundreds of thousands of lives lost. Additionally, for those who had been receiving treatment and counseling, their services were disrupted.

Data from the report seems to support this theory.

In the chart below, the number of alcohol-related deaths had ticked down slightly at the start of 2020 but shot upward between February and April 2020, when the pandemic officially made its way into the U.S. and led to a complete shutdown. 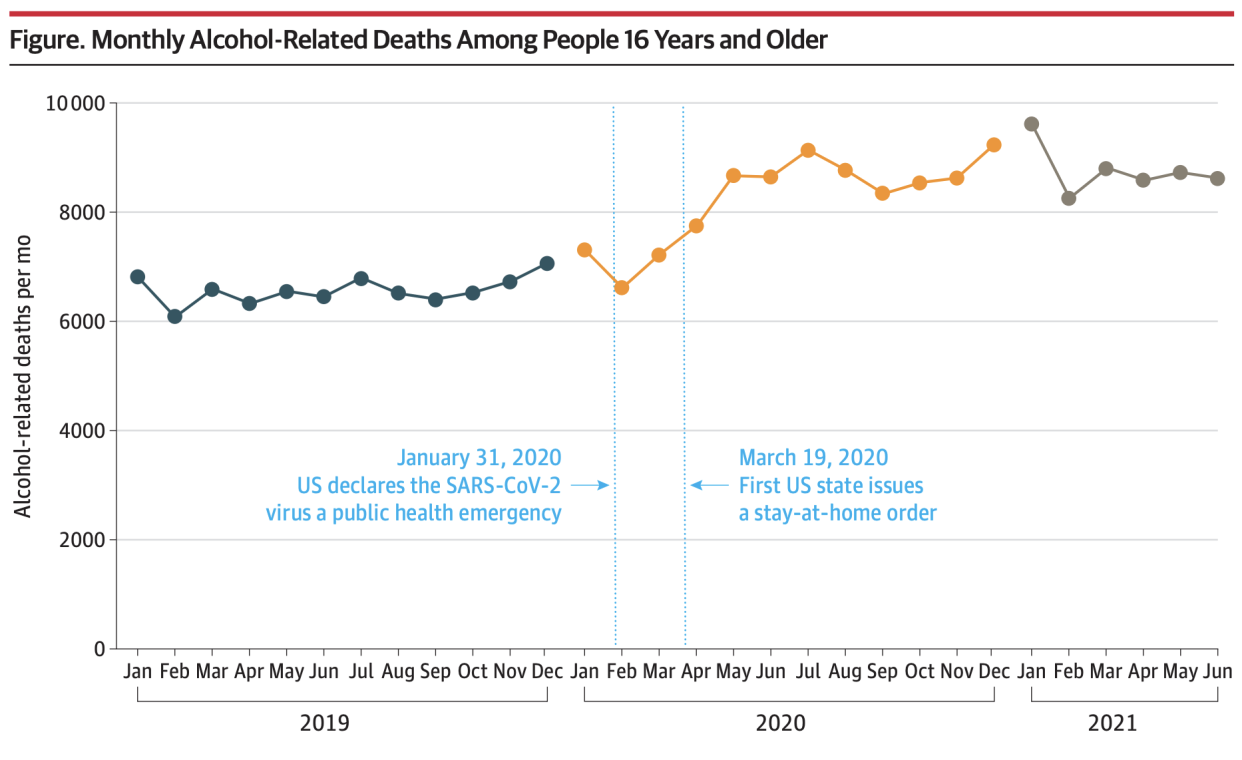 These numbers continued rising throughout the year and reached an all-time high at the end of December 2020, when the Delta variant led to a record number of COVID cases, hospitalizations, and deaths.

“When people are struggling, they look for things they can do to help reduce their discomfort,” White said. “Stress is incredibly uncomfortable. Uncertainty, worry, these are very uncomfortable emotional states. People are just trying to cope. We look at the increase in deaths from alcohol as an indicator that people were really under a lot of stress during the pandemic, and they were trying to cope.”

'An enormous financial toll on the United States'

There's no clear consensus on what could stop this troubling trend before it becomes even more problematic, but according to Gerry Schmidt, former president of the Association for Addiction Professionals, it starts with money.

“A lot of times it comes down to funding,” Schmidt told Yahoo Finance. “We’re at a time when the research shows that the longer you keep individuals engaged in active treatment, the chances for longer-term success are there. Right now we’re seeing a decrease in approved funding for longer-term treatment.”

Additionally, Schmidt mentioned "people don’t develop problems with alcohol because they want to." He said in most cases, it happens because "they’re just trying to find a way to get through life."

"So the more we can do to help people get through life in healthy ways, we think we’ll see a reduction in harms associated with alcohol," he added. 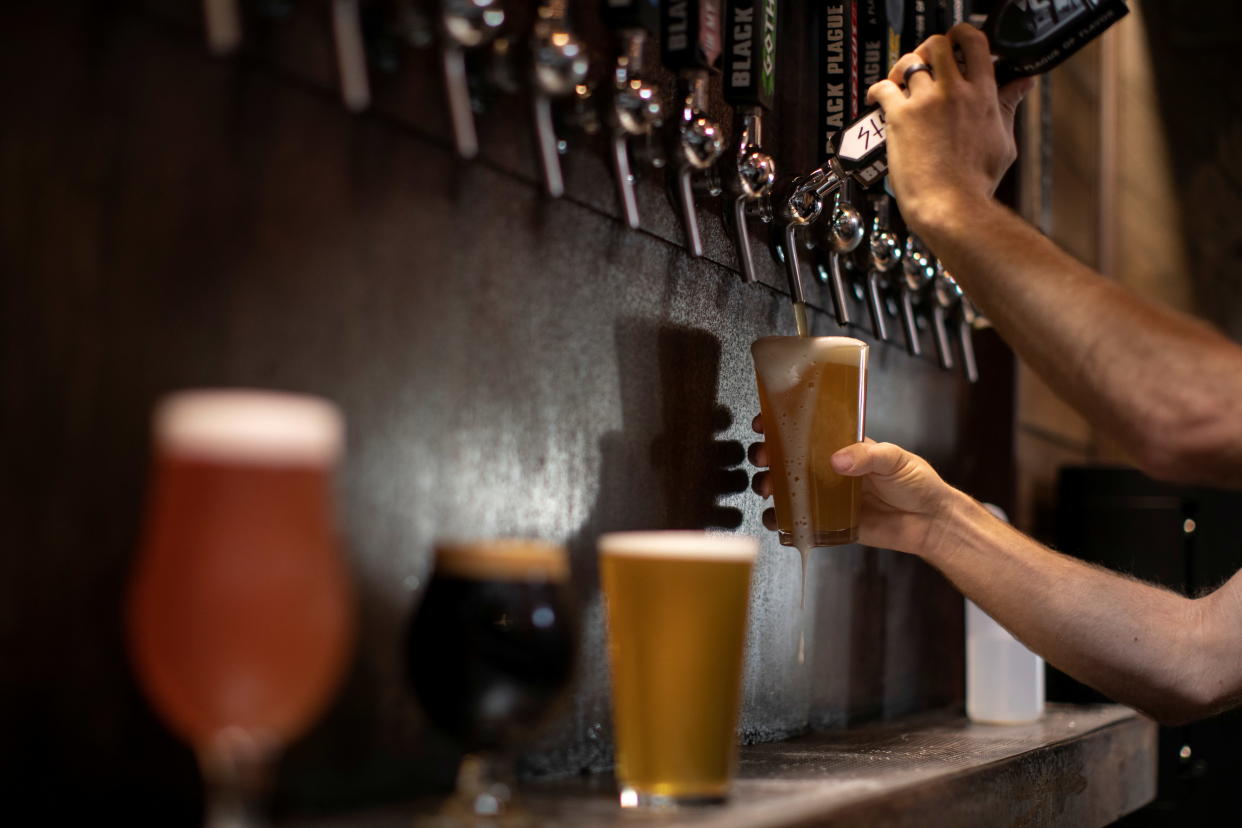 “The research shows that if you engage people for up to six months or longer in some form of interactive treatment, whether it’s in extended residential care or what we call outpatient treatment, the success rate goes up significantly,” Schmidt said. “And we’re having a horrible time doing that. There’s all kinds of research out there that supports the fact that the longer you engage somebody in specialized care, the better chances they have of longer-term recovery.”

There is a financial incentive to invest in treatment for alcohol and substance use disorders. A report from 2010 estimated that alcohol cost the United States at least $249 billion a year in medical costs and lost wages. A separate JAMA study found that substance use disorders cost hospital systems upwards of $13 billion a year, with alcohol-related disorders accounting for $7.6 billion of that total.

“A lot of that is lost productivity due to people being hungover and not showing up to work, people not being able to maintain employment due to their struggles with alcohol,” White said. “So it exacts an enormous financial toll on the United States.”

Adriana Belmonte is a reporter and editor covering politics and health care policy for Yahoo Finance. You can follow her on Twitter @adrianambells and reach her at [email protected]