Beirut: The son of a legendary Afghan warlord, who dreams of peace and of one day becoming a physics teacher, has vowed to lead a bloody war against the Taliban’s unjust rule.

Ahmad Massoud is holed up in the last Afghan province not controlled by the Taliban, with four helicopters, a few hundred soldiers and a handful of figures from an exiled government on a mission to resist the Islamist group – and perhaps live up to his warrior father, the Lion of Panjshir. 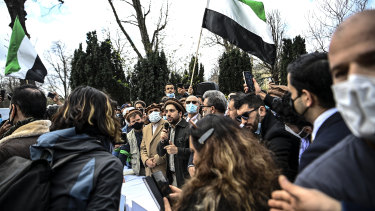 Ahmad Massoud, son of late Afghan commander Ahmad Shah Massoud, centre, speaks to supporters in May at the naming of an alley along the Champs Elysees in Paris named after his father.Credit:AP

The British-educated 32-year-old gave his first interview since the Taliban overran Afghanistan, speaking from the Panjshir Valley – a narrow corridor of land 160 kilometres north of Kabul leading into the Hindu Kush mountain range.

“We are telling them that as soon as war breaks out in the Panjshir Valley, then there is no going back,” he said, adding that he had warned the Taliban of his plan to resist an unjust rule. “It is going to be a very bloody and hard war because the people of Panjshir are going to fight to the very last breath.”

His pledge of resistance seems quixotic: he is faced with a group that has just inherited military hardware from a 20-year, $US83 billion ($116 billion) investment in the collapsed Afghan army. But he’s drawing from an old template laid down by his late father.

In the 1980s, Ahmed Shah Massoud commanded Mujahideen guerillas against Soviet invaders from the same valley, an impregnable natural fortress of narrow gorges and mountain streams flanked by snow-capped peaks. 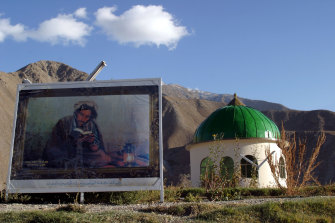 The Tomb of Ahmad Shahr Massoud up in the mountainous province of Panjshir. Massoud was one of the most powerful and successful Mujahideen commanders fighting the Russians, being a key player in the civil war and then fighting the Taliban.Credit:Ash Sweeting

The Lion of Panjshir, as he was known, was a charismatic Tajik leader who united a coalition of ethnic militias into the Northern Alliance, a force that resisted the Taliban as it took control of the rest of Afghanistan in the 1990s.

A darling of Western media – and MI6, which provided him with arms – Ahmed Shah gained a reputation as a moderate leader with a common touch. He was killed two days before 9/11, at 48, by a bomb hidden in a video camera by al-Qaeda agents posing as reporters.

Massoud reluctantly followed in his father’s footsteps. After completing military training at Sandhurst, England, in 2012, he read war studies at King’s College London and gained a master’s degree in international politics at London’s City University. By 2019 he had returned to Panjshir, canvassing support in Kabul and beyond. He warned of what he said were the shortcomings of the peace plan negotiated by Zalmay Khalilzad, the US special envoy, and the dangers of a hasty withdrawal of foreign troops. 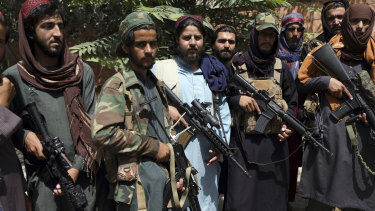 “Unfortunately they went through with them and I told them that the Afghanistan government would not last weeks, let alone months, after this,” Massoud said. “Unfortunately even I was wrong, because the government didn’t even last days.”

He says he hopes to do what the military might of a superpower could not: hold the Taliban to a negotiated deal.

Massoud is suspicious of a general amnesty announced by the Taliban, doubting their assurances that there will be no reprisals. “They are telling us good things but their actions are showing us something else,” he said.

In anticipation of fighting, Massoud has gathered the nucleus of a resistance, including Amrullah Saleh, the country’s ousted vice-president, hundreds of soldiers and pilots, scores of armoured vehicles and piles of equipment.

More than a thousand civilians, including a number of ethnic minorities, have also fled to the valley, he said.

“With the brutality that the Taliban are showing to our people we are anticipating more waves of refugees coming to the Panjshir Valley,” he said.

But can the Panjshir form a rump state of resistance to the Taliban? It is smaller even than the area controlled by his father in 1996, when the Taliban first took control of Kabul and, while his father was able to rely on supply lines to the border, Massoud said he was surrounded. “They have their troops around our valley,” he said.

If his struggle is to have any chance of success, Massoud needs international help, he added.

“We need more weapons, more ammunition and more supplies,” he wrote in an article published in The Washington Post on Wednesday.

The international community cannot ignore Afghanistan now it has fallen to the Taliban, he said.

“This is the pressure the world needs to put on the Taliban: You will not have legitimacy until you are part of an inclusive government,” he said. “Until then no Taliban government is legitimate.”