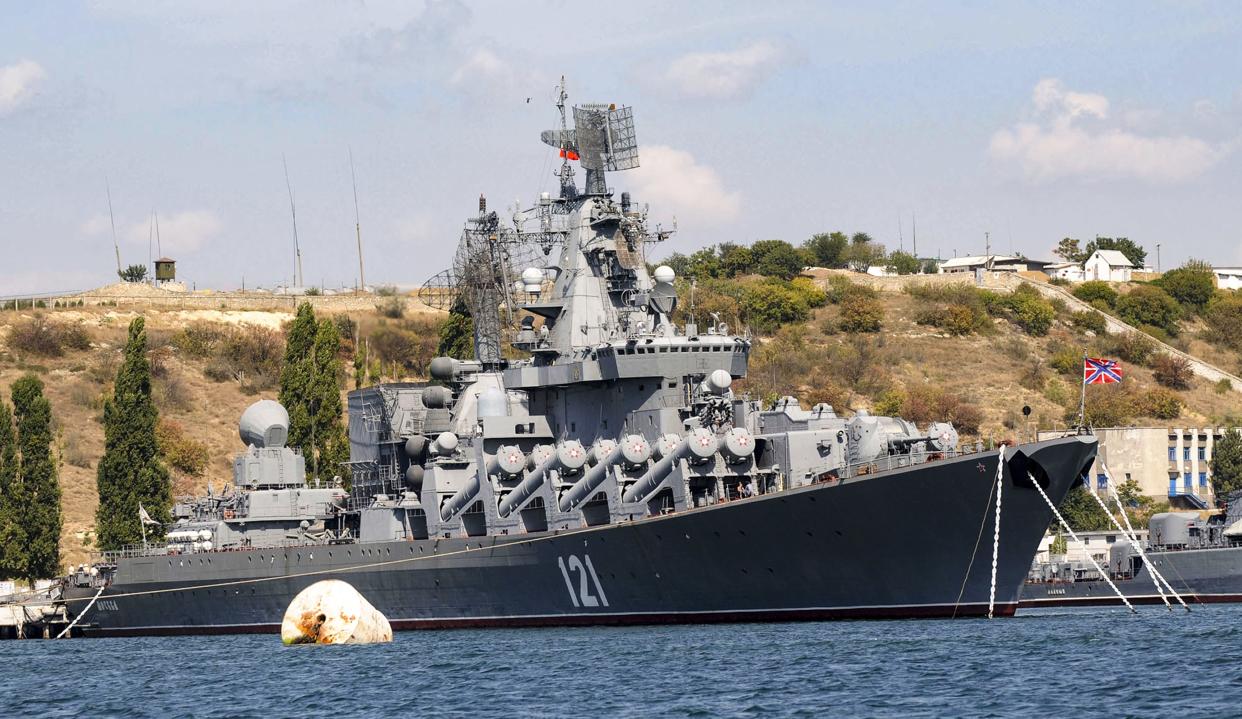 KYIV, Ukraine (AP) — Ukrainian forces said they struck and seriously damaged the flagship of Russia's Black Sea fleet, dealing a potentially major setback to Moscow's forces as they try to regroup for a renewed offensive in eastern Ukraine after retreating from much of the north, including the capital.

Russia said Thursday the entire crew of the Moskva, a warship that would typically have 500 sailors on board, was forced to evacuate after a fire overnight and also reported it was badly damaged. It did not acknowledge any attack, which would also deal a major blow to Russian prestige seven weeks into a war that is already widely seen as a historic blunder.

The reported ship attack came hours after Ukraine's allies sought to rally new support for the embattled country. On a visit with leaders from three other countries on Russia's doorstep who fear they could next be in Moscow's sights, Lithuania's President Gitanas Nauseda declared that “the fight for Europe’s future is happening here.”

The news of the flagship's damage overshadowed Russian claims of advances in the southern port city of Mariupol, where they have been battling the Ukrainians since the early days of the invasion in some of the heaviest fighting of the war — at a horrific cost to civilians.

Russian Defense Ministry spokesman Maj.-Gen. Igor Konashenkov said Wednesday that 1,026 troops from the Ukrainian 36th Marine Brigade surrendered at a metals factory in the city. But Vadym Denysenko, adviser to Ukraine’s interior minister, rejected the claim, telling Current Time TV that “the battle over the seaport is still ongoing today.”

It was unclear when a surrender may have occurred or how many forces were still defending Mariupol.

Russian state television broadcast footage Wednesday that it said was from Mariupol showing dozens of men in camouflage walking with their hands up and carrying others on stretchers or in chair holds. One man held a white flag.

Mariupol's capture is critical for Russia because it would put a swath of territory in its control that would allow its forces in the south, who came up through the annexed Crimean Peninsula, to link up with troops in the eastern Donbas region, Ukraine's industrial heartland and the target of the coming offensive.

Moscow-backed separatists have been battling Ukraine in the Donbas since 2014, the same year Russia seized Crimea. Russia has recognized the independenceof the rebel regions in the Donbas. 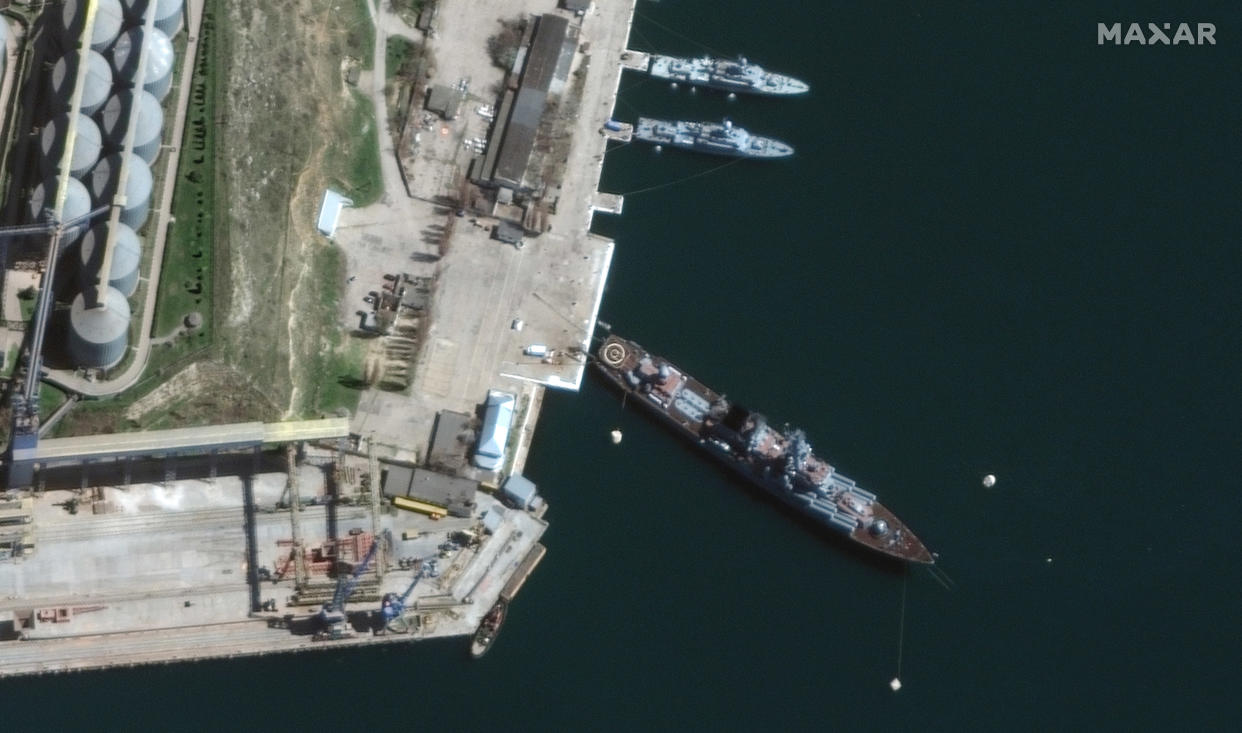 But the loss of the Moskva, which satellite images show was at the port of Sevastopol in Crimea a week ago, could set those efforts back.

The governor of the Odesa region, Maksym Marchenko, said the Ukrainians struck the guided-missile cruiser with two Neptune missiles and caused “serious damage.” Russia’s Defense Ministry said ammunition on board detonated as a result of a fire.

It was not clear if the ship was totally disabled, but even serious damage could be a major blow to Russia, which already saw its tank carrier Orsk hit late last month.

Hours after the attack was reported, Ukrainian authorities said on the Telegram messaging service that explosions had struck Odesa, Ukraine's largest port which lies on the Black Sea, as does Sevastopol. They urged residents to remain calm and said there is no danger to civilians.

Russia invaded on Feb. 24 with the goal, according to Western officials, of rapidly seizing Kyiv, toppling the government and installing a Moscow-friendly replacement. But the ground advance stalled in the face of strong Ukrainian resistance with the help of Western arms, and Russia has lost potentially thousands of fighters. The conflict has killed untold numbers of Ukrainian civilians and forced millions more to flee.

A U.N. task force warned that the war threatens to devastate the economies of many developing countries that are facing even higher food and energy costs and increasingly difficult financial conditions. U.N. Secretary-General Antonio Guterres said the war is “supercharging” a crisis in food, energy and finance in poorer countries that were already struggling to deal with the COVID-19 pandemic, climate change and a lack of access to funding.

The war has also unsettled the post-Cold War balance in Europe — and particularly worried countries on NATO's eastern flank that fear they could next come under attack. As a result, those nations have been some of Ukraine's staunchest supporters.

The presidents of Poland, Lithuania, Latvia and Estonia traveled Wednesday to war-ravaged areas in Ukraine and demanded accountability for what they called war crimes. They met with Ukrainian President Volodymyr Zelenskyy and visited Borodyanka, one of the towns near Kyiv where evidence of atrocities was found after Russian troops withdrew to focus on the country's east.

"There are no doubts that they committed war crimes. And for that, they should be accountable,” Latvian President Egils Levits said.

Nauseda of Lithuania called for tougher sanctions, including against Russian oil and gas shipments and all the country’s banks.

In his nightly address, Zelenskyy noted that the prosecutor of the International Criminal Court visited the Kyiv suburb of Bucha, which was controlled by Russian forces until recently and where evidence of mass killings and more than 400 bodies were found.

“It is inevitable that the Russian troops will be held responsible. We will drag everyone to a tribunal, and not only for what was done in Bucha,” Zelenskyy said late Wednesday.

He also said work was continuing to clear tens of thousands of unexploded shells, mines and trip wires left in northern Ukraine by the departing Russians. He urged people returning to homes to be wary of any unfamiliar objects and report them to police.