Pelosi said the “kindest thing I could say” after looking at Trump’s executive orders was that he “doesn’t know what he’s talking about.”

“Either the president doesn’t know what he’s talking about, … or something’s very wrong here,” she reiterated during an interview on CNN’s “State of the Union.” In that interview, she called his actions “absurdly unconstitutional.”

The interviews came shortly before the U.S. reached 5 million confirmed coronavirus cases, according to tracking data from Johns Hopkins University. The university put U.S. deaths at over 162,000, and millions have been left unemployed with weak job prospects in the immediate future.

In his Saturday executive orders, Trump asserted he had the authority to defer payroll taxes and fund enhanced unemployment benefits — the latter at a $200 per week reduction — after relief legislation stalled in Congress and benefits expired. Trump’s action requires states to foot a quarter of the enhanced unemployment bill, although it’s unclear whether they are able or willing to do so.

But as experts pointed out, Trump’s actions are far more nebulous than he made them out to be. From the Washington Post:

Trump’s action on unemployment does not funnel additional money to the existing unemployment program, but instead creates a new program for “lost wages” that states will have to set up from scratch, said Michele Evermore, an unemployment expert at the National Employment Law Project. It could take months for such an effort to get off the ground, Evermore said, and states have already been overwhelmed in trying to set up the unemployment insurance programs.

Senate Minority Leader Chuck Schumer told ABC’s “This Week” that he’d defer to lawyers on the legality of Trump’s efforts, but cast them as wildly ineffective at their own goals.

“It doesn’t do the job. It’s not going to go into effect most places for weeks or months because it’s so put together in a crazy way,” Schumer said, calling Trump’s actions “unworkable, weak and far too narrow.” 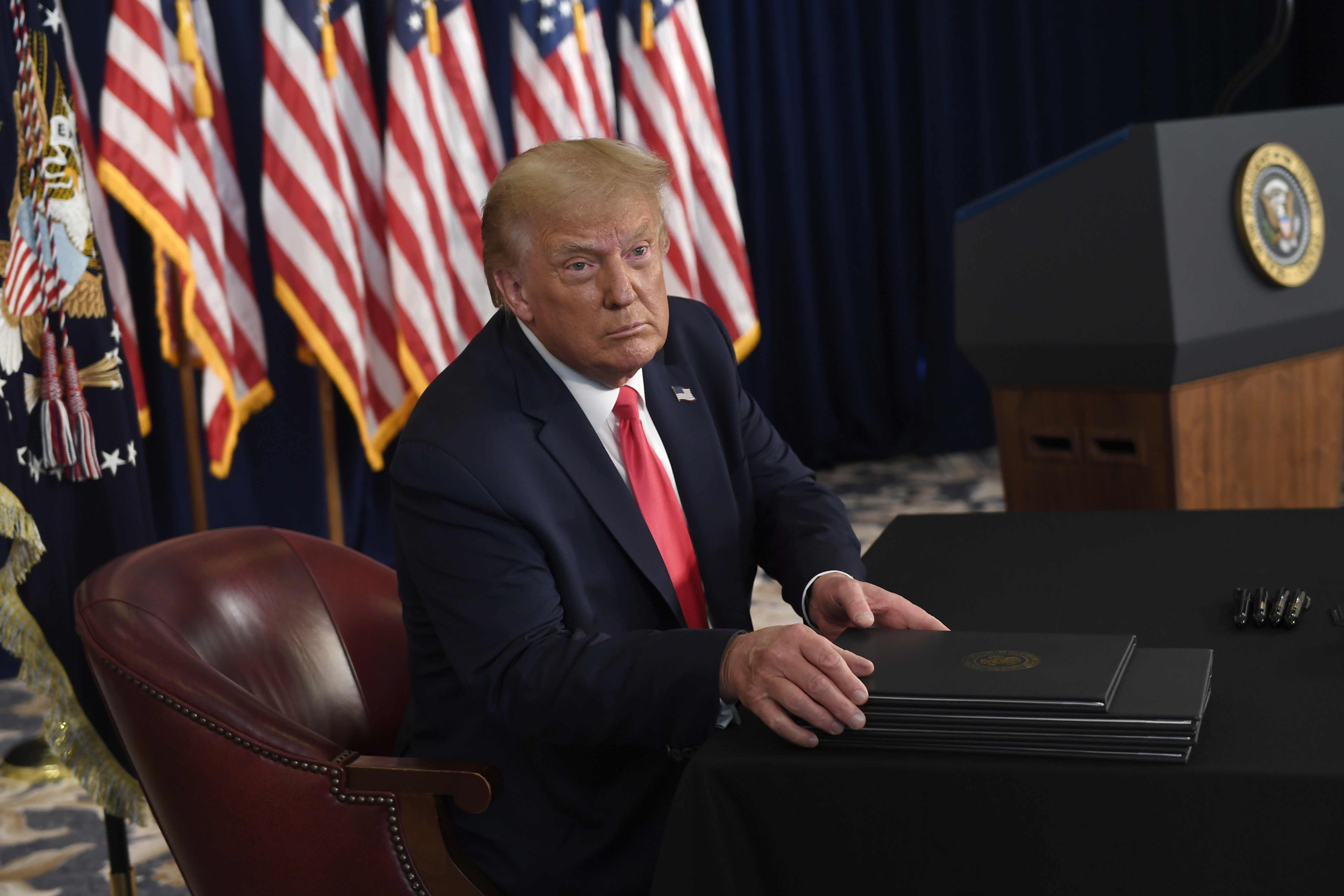 Both Schumer and Pelosi pointed to the Democratic-controlled House’s relief package that included an extension of the $600 per week of enhanced unemployment, among many other measures. White House officials had pushed for a smaller package, and they warned that the weekly checks were too generous to encourage people to go back to work.

“Nancy Pelosi and Chuck Schumer have chosen to hold this vital assistance hostage on behalf of very extreme partisan demands and the radical-left Democrats, and we just can’t do that,” Trump said at a Saturday news conference at his golf resort in Bedminster, N.J.

“So, hopefully, we can do something with them at a later date,” he added.

Trump railed at length against the Democratic bill for funding election assistance programs that he falsely depicted as creating widespread fraud and trying to “steal” the November election.