Australia is hitting its vaccination targets and planning to reopen to the world, but what’s the condition of this world with which we’re reconnecting?

Almost half of humanity – 48.5 per cent, according to Our World in Data – has had at least one dose of a vaccine. That’s not ideal, but it’s encouraging, right? 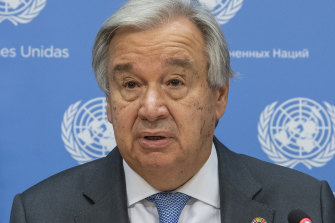 UN Secretary-General António Guterres says the uneven distribution of vaccines is an obscenity.Credit:AP

Yet consider this tale of two worlds. In rich countries, 63 per cent of the population had had at least one shot by last week. But in poor, it was just 4.5 per cent, according to the World Health Organisation.

The United Nations Secretary-General, Antonio Guterres, calls the gap between the two worlds “an obscenity”.

So, for instance, as Australia prepares to give booster jabs to anyone interested, just 4 kilometres to its north lies a country of 10 million people with vaccine coverage of only 1.5 per cent.

That is, of course, Papua New Guinea. Other nations in the region are better off, yet still far from herd immunity. Indonesia has given a first dose to 40 per cent of its people, the Philippines 26 and Myanmar 21 per cent. Most of Africa sits at 3 per cent or so. 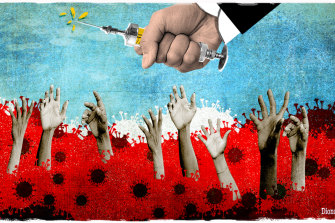 The Australian government promised to deliver 60 million doses to poor countries in its region, but so far has supplied just 8 per cent of its pledge, according to Oxfam.

And, inexplicably, Australia has announced that it will not renew any supply contracts with manufacturers once its existing plans for 50 million doses have been met.

And while the US and other rich nations of the G7 have promised to supply 1.8 billion doses to poor countries, they’ve so far delivered only 261 million, or one in seven of the vaccines promised, according to America’s Forbes magazine.

With dozens of nations desperate for vaccines, China has stepped in to fill the void. Beijing has supplied over 1 billion doses in a “soft power” program to win friends and influence people.

Countries wary of China are now accepting its help. For instance, Vietnam, locked in a territorial dispute with Beijing, had resisted its help in preference to Western vaccines until capitulating under the weight of surging infections.

Even if Australia wanted to feel smug about our high levels of protection, it’d be a short-lived indulgence.

Because for as long as the virus is free to run rampant among big populations, it will continue to mutate. The Delta variant is just that – one variant.

As Edinburgh University’s professor of global public health, Devi Sridhar, says: “The more the virus circulates, the more likely it is that mutations and variants will emerge, which could make our current vaccines ineffective.”

Two-thirds of experts estimate that we have a year at most before that happens, according to a survey of 77 epidemiologists from 28 countries carried out by The People’s Vaccine Alliance in March. 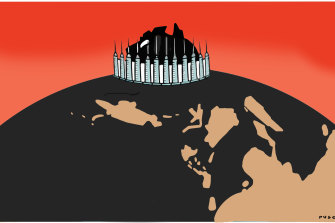 Another 18 per cent of them estimated it’d take two years. About 8 per cent said that existing vaccines would never lose effectiveness.

Is the world on track to win this race? In other words, how long will it take to achieve vaccination coverage high enough to get herd immunity everywhere?

“Around 23 low-income countries have such low rates of vaccination that, on current rates, they would not vaccinate 70 per cent of their populations until after 2030,” according to the Burnet Institute’s Brendan Crabb and Mike Toole.

In other words, on the balance of expert opinion, all the effort and upset of the past two years is only the opening phase of a much longer era of recurring pandemics for which we are unprepared and unprotected.

This gives rise to the catchphrase being retailed by the UN, the World Health Organisation and even the International Monetary Fund: “No one is safe until everyone is safe.”

It wasn’t supposed to be like this. “The intentions were good,” says Australia’s Tim Costello, spokesman for the End COVID for All campaign. “In April last year all the governments said, ‘this time we’re going to do it right, vaccination is a global public good, we’ll vaccinate all the poor countries’.”

The COVAX facility was set up to combine the buying power of all nations and act as a global hub for buying and distributing vaccines. And COVAX has been doing the job. It’s responsible for the vast bulk of vaccines delivered to poor countries.

But it’s way behind on its plans. Even after cutting its delivery target for this year to 1.4 billion doses, it’s still managed so far to supply only around 400 million. Officials of the African Union estimate that COVAX will be able to supply only a quarter of the continent’s needs by the end of this year.

What went wrong? Rampant nationalism. Rich countries cut deals directly with vaccine manufacturers, cutting COVAX out of the picture. It was every man for himself. Some poorer nations started to do the same. This cut away COVAX’s collective buying power.

Some of the big manufacturers have sold vaccines only to rich nations where they can make the fattest profit margins. Moderna and Johnson and Johnson have yet to deliver a single dose to COVAX.

Compounding this, COVAX made the mistake of relying very heavily on one country – India – to make its vaccines. This worked until India started to drown in COVID cases and its government temporarily banned exports.

Where to now? Australian Jane Halton is co-chair of one of COVAX’s founding institutions, the Coalition for Epidemic Preparedness. She says two immediate steps are, first, increase the number of doses manufactured and, second, “use boosters sparingly and based on evidence and need in order that we can deliver to countries with low coverage and vulnerable populations that need extra protection”.

The G20 summit later this week, which will include Scott Morrison at the table in Rome, is an opportunity to do more. Costello’s campaign is calling for the rich countries of the world to put up a combined $US50 billion ($67 billion) “to put COVAX back on track”.

The UN’s Guterres is calling for a more modest $US8 billion. Either way, more is needed. No one is safe until everyone is safe.