Kobe Bryant’s widow fled the courtroom in tears on Thursday after a bartender was asked to describe photos of the dead bodies of Bryant and his daughter Gianna.

Vanessa Bryant is suing the Los Angeles County sheriff’s office and fire department for invasion of privacy, after it emerged photos of her dead husband and daughter were shared by officers.

The 41-year-old basketball superstar was killed alongside his 13-year-old daughter Gianna and seven others in a helicopter crash near Los Angeles two years ago.

On Thursday, Vanessa Bryant became emotional when Victor Gutierrez, a bartender, was asked if he had seen the body of her daughter. 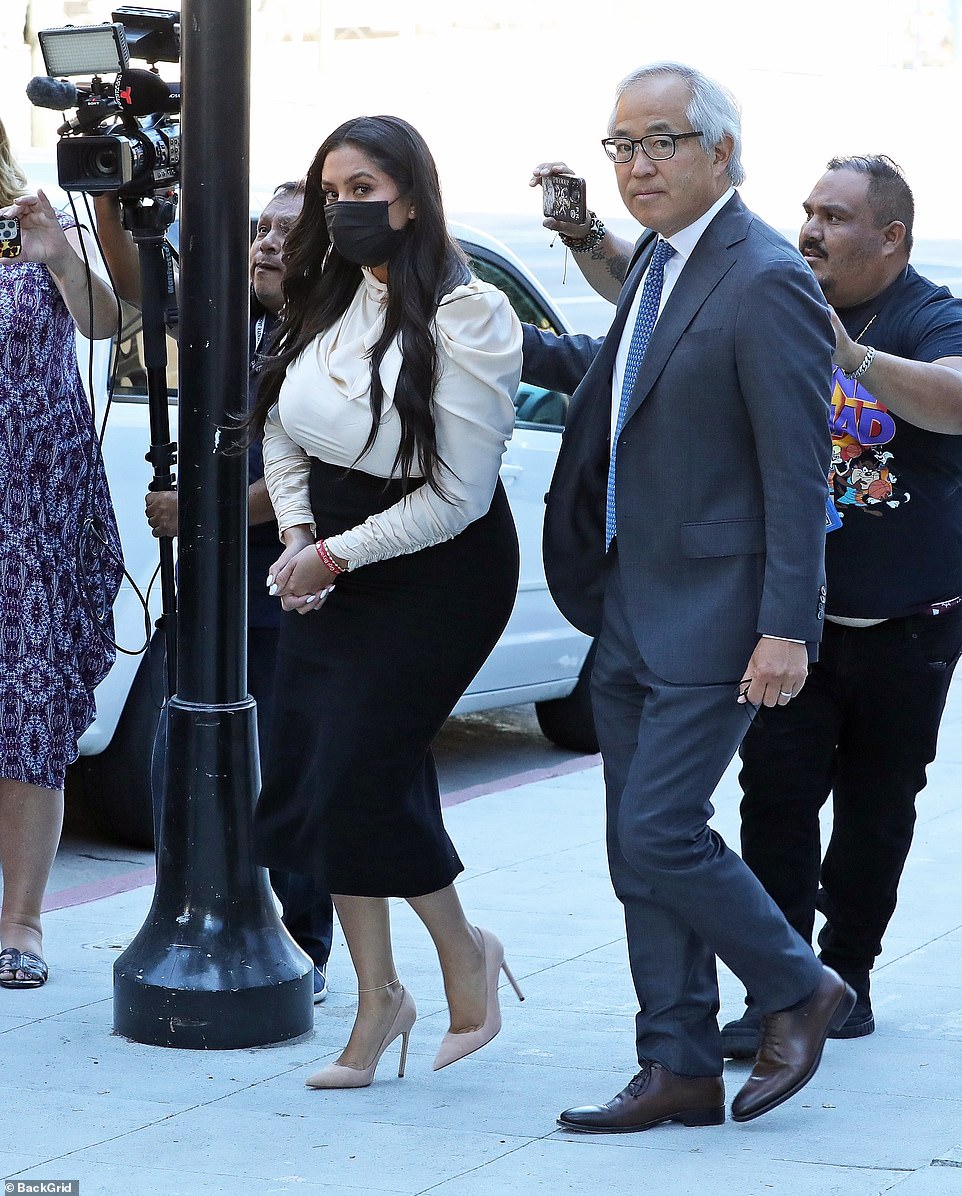 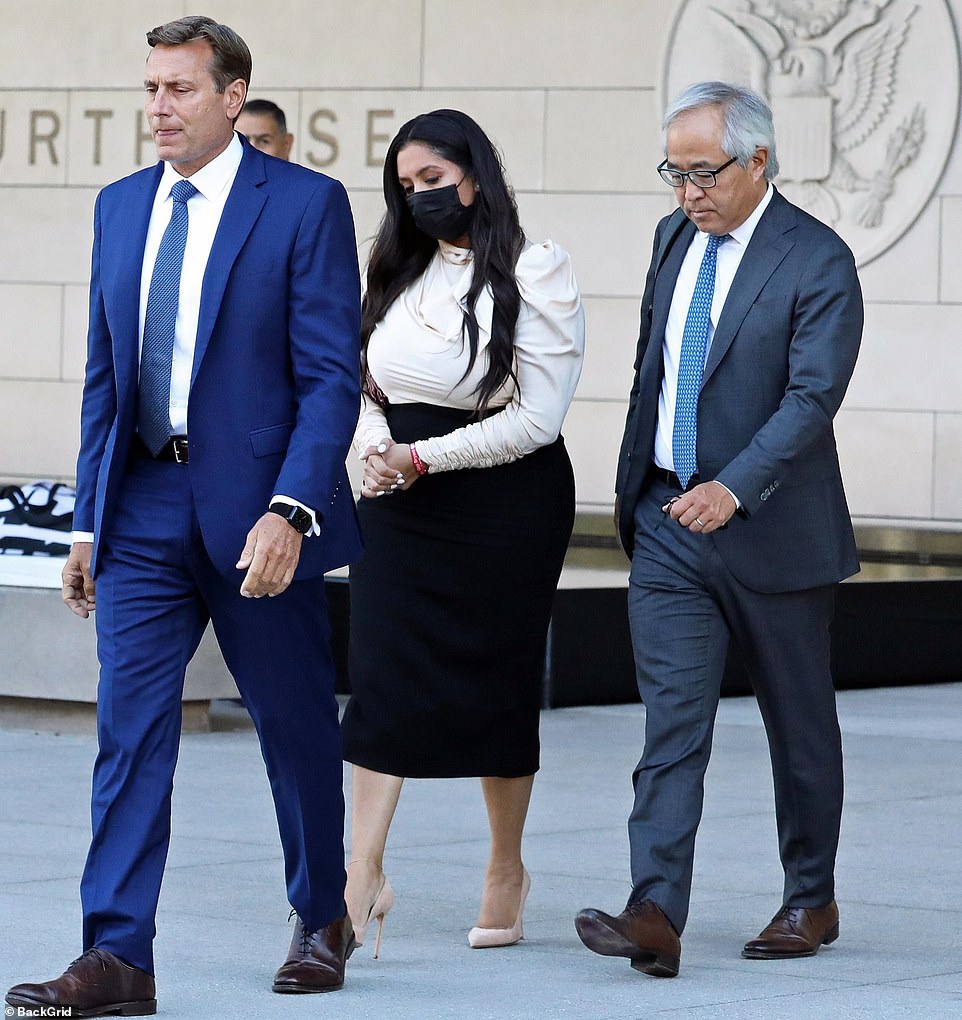 Vanessa Bryant leaves court for the day on Thursday, during the trial against Los Angeles County Sheriff’s Office and fire department for invasion of privacy 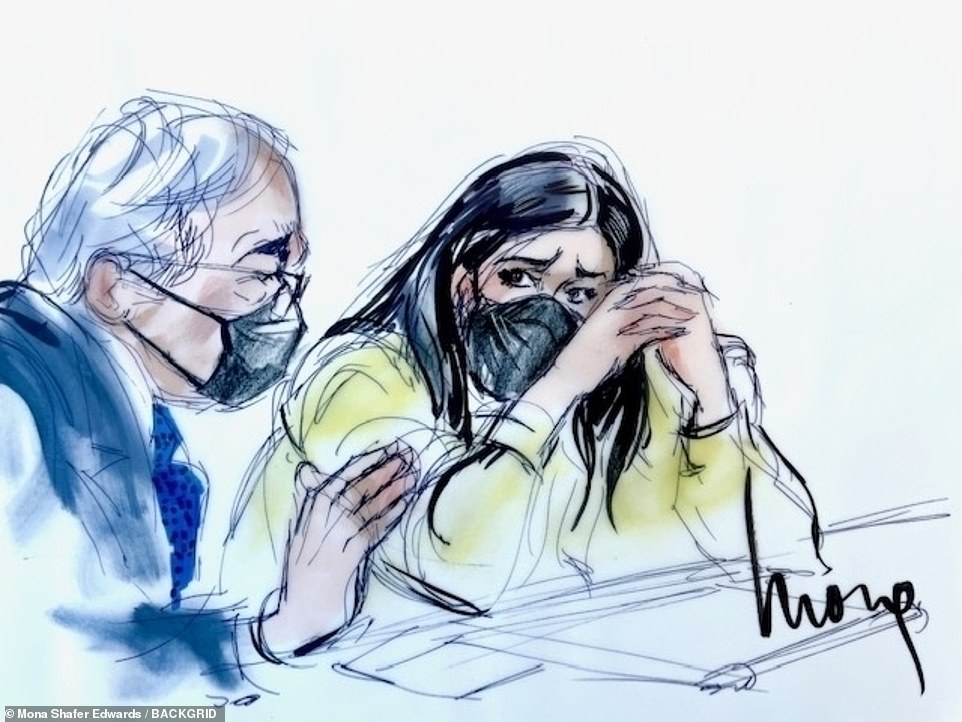 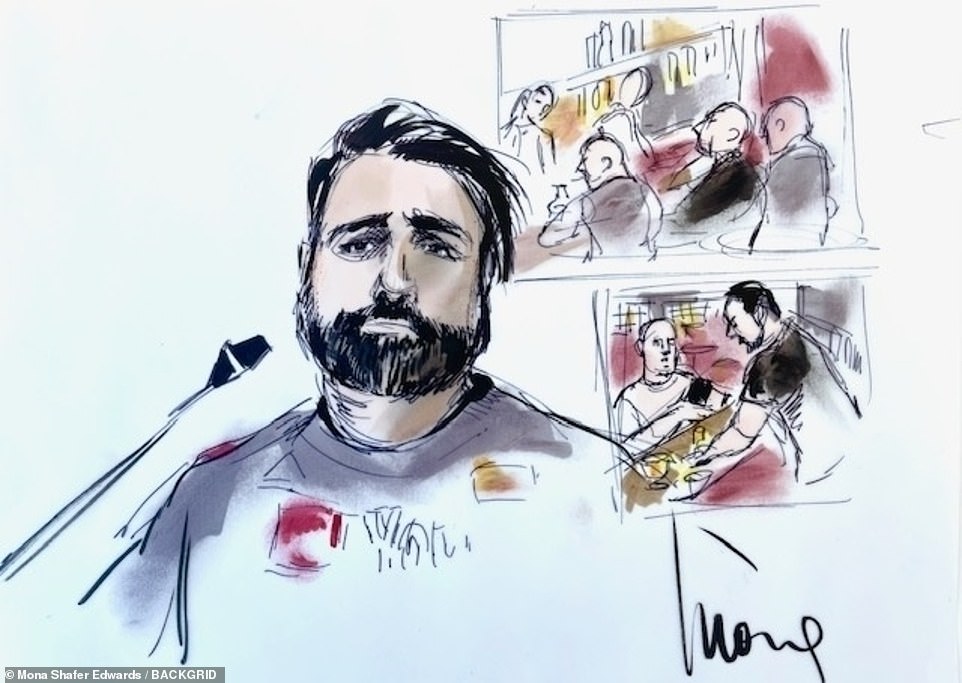 Victor Gutierrez, a bartender, told how he was shown photos by a sheriff’s deputy two days after the crash

Gutierrez had been describing what he saw in the photos shown by a Los Angeles County sheriff’s deputy.

Luis Li, Bryant’s lawyer, in his opening statements on Wednesday played jurors CCTV footage of an off-duty sheriff’s deputy drinking at a bar and showing the photos to Gutierrez, who shakes his head in dismay.

The lawyer then showed an image of the men laughing together later.

Li described firefighters looking at the phone photos two weeks later at an awards banquet, and showed the jury an animated chart documenting their spread to nearly 30 people.

On hearing Gutierrez being question, Bryant cried, stood up and her attorney asked the presiding judge permission for Bryant to leave the court room.

‘You don’t have to ask my permission,’ the judge said.

Bryant did not return for the remainder of Gutierrez’s testimony. 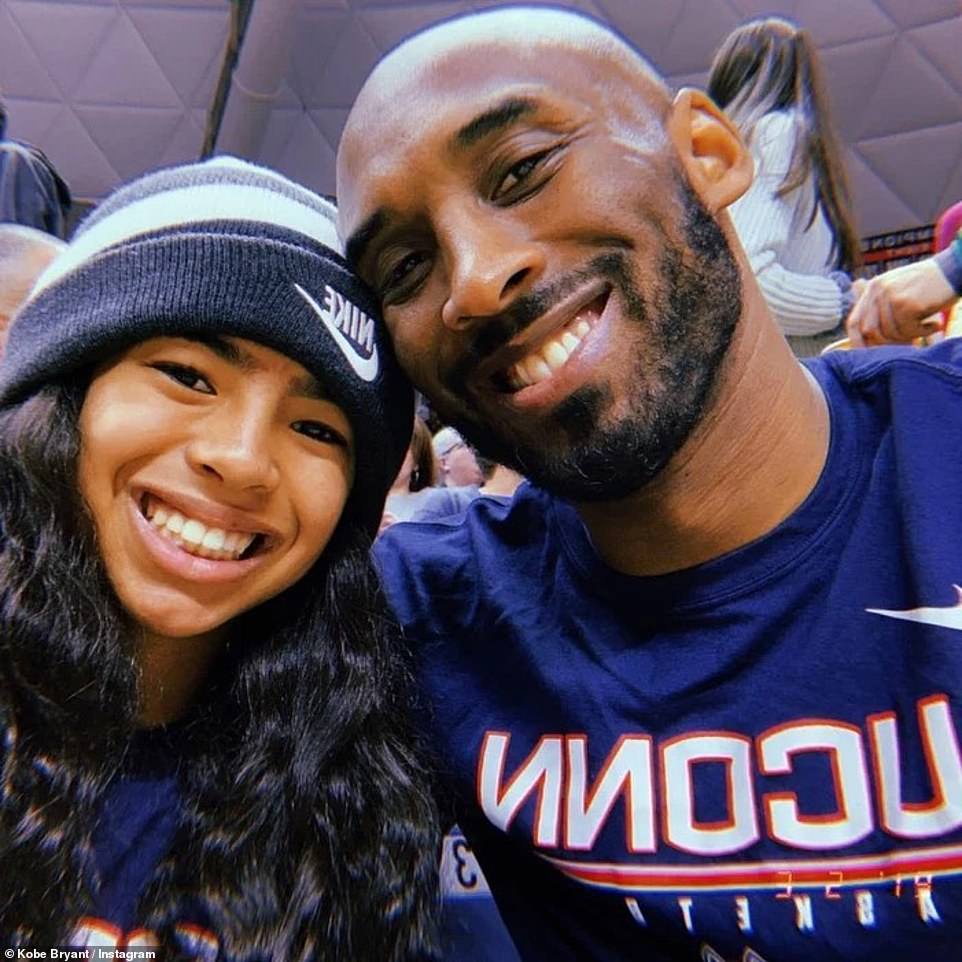 Kobe Bryant and his daughter Gianna. The pair were killed in January 2020 in a helicopter crash in Calabasas

The jurors were shown surveillance clips from the bar on January 28th, 2020 – two days after the crash.

Gutierrez described wincing at the photos and then admitted to telling the condition of the victims’ bodies to five sets of people.

One person he recounted the photos to was Ralph Mendez, who later filed a complaint against the deputy who initially showed Gutierrez the photos.

‘I was in disbelief, disappointed, disgusted and angry,’ Mendez said.

Earlier on Thursday, the court heard from Los Angeles Lakers general manager Rob Pelinka, as well as one of the first responders and a coroner.

On Wednesday, in opening statements, the court heard that a ‘culture of callousness’ saw emergency service workers take and share pictures of Bryant’s body.

Li said the mobile phone pictures shot at the scene by a deputy and fire captain were ‘visual gossip’ viewed ‘for a laugh’ and had no official purpose. 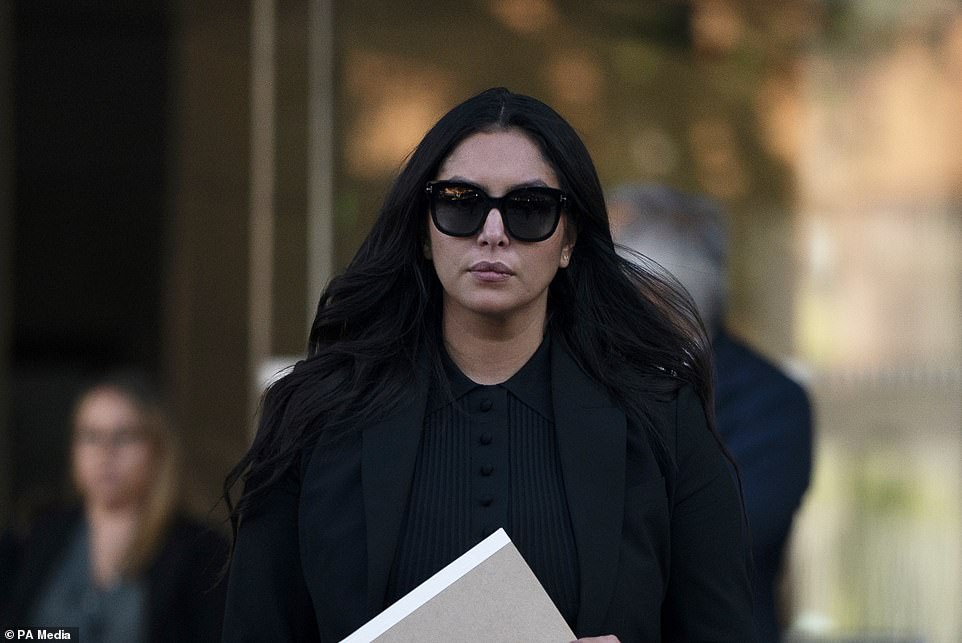 Vanessa Bryant, the widow of Kobe Bryant, leaves a federal courthouse in Los Angeles on Wednesday

‘They were shared by deputies playing video games,’ Li said.

‘They were shared repeatedly with people who had absolutely no reason to receive them.’

A lawyer for the county defended the photographs as an essential tool for emergency service workers seeking to share information when they thought they might still save lives at the chaotic, dangerous and hard-to-reach crash scene in the Calabasas hills west of LA.

She was still wiping tears from her eyes minutes afterward during a break. 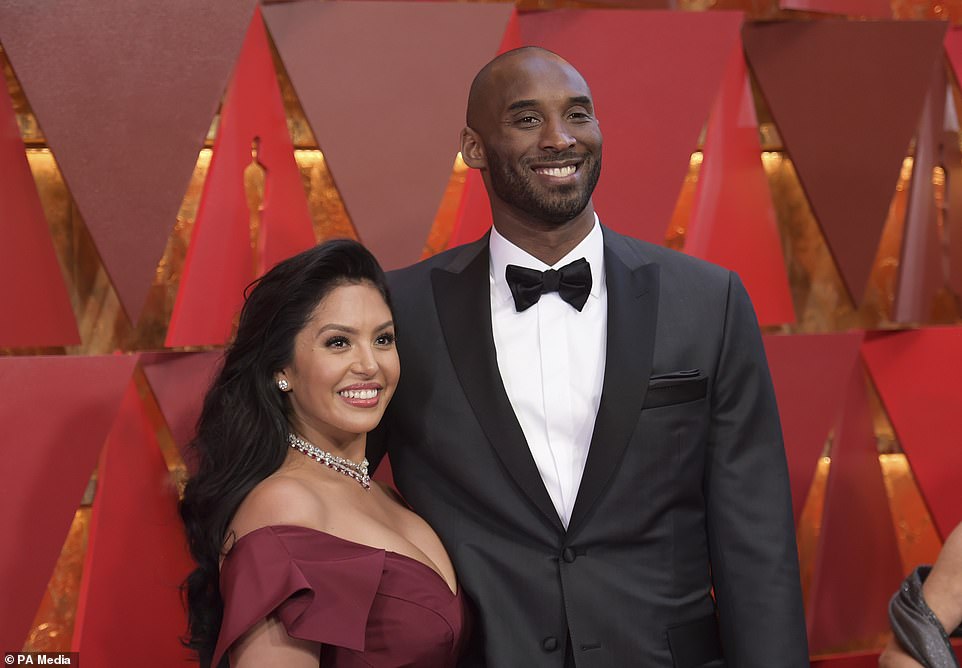 Vanessa Bryant, left, and Kobe Bryant arrive at the Oscars in Los Angeles in 2018

Li told jurors that learning a month after the crash about the photos’ circulation not from the county but the Los Angeles Times compounded her still-raw suffering.

‘January 26 2020 was the worst day of Vanessa Bryant’s life. The county made it much worse,’ Li said.

‘They poured salt in an open wound and rubbed it in.’

Li said the county failed to conduct a thorough investigation to make sure every copy of the photo was accounted for, and because of the fear that they will someday surface, and her surviving children may see them online, Bryant ‘will be haunted by what they did forever’.

During the defense’s opening statement, Hashmall told jurors the fact the pictures have not appeared in more than two years shows leaders in the sheriff’s and fire services did their jobs.

‘They’re not online. They’re not in the media. They’ve never even been seen by the plaintiffs themselves,’ she said.

‘That is not an accident. That is a function of how diligent they were.’ 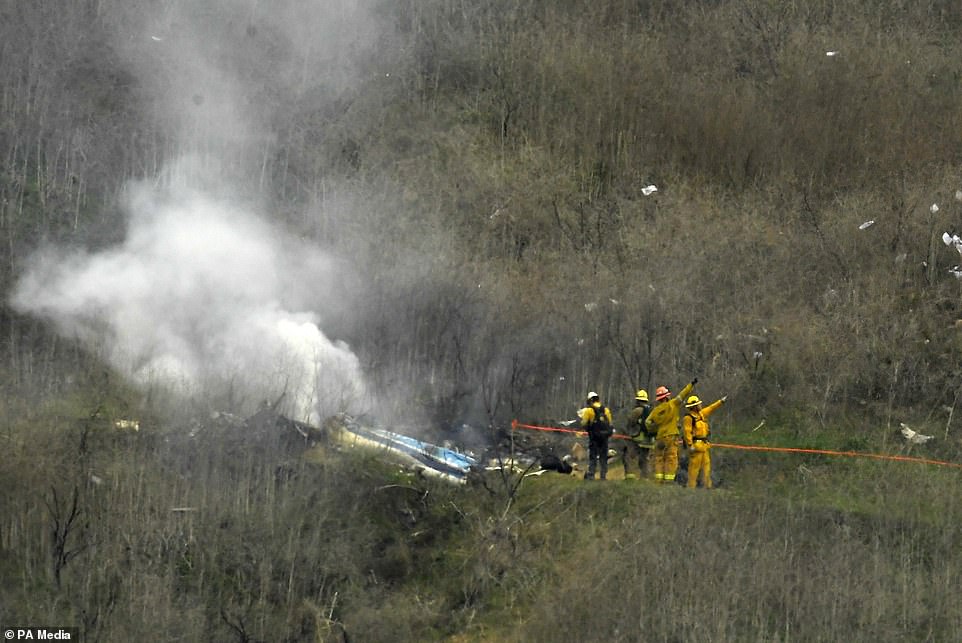 Sheriff Alex Villanueva and department officials immediately brought in all those involved and ordered them to delete the pictures, rather than conduct a long official investigation that might harm the families further, she said.

‘He picked what he viewed as the only option — decisive action,’ Hashmall said.

Hashmall told the jury the reason Li even had the video of the barman to show, which she suggested was deceptively edited to show the men laughing together, was because the sheriff’s department got it the same day they received a complaint from another punter who witnessed the sharing.

She said the deputy was struggling emotionally from the difficulty of dealing with the crash scene, and that the barman was a longtime friend in whom he was confiding.

‘He pulled out his phone, and that should not have happened,’ she said.

‘In a lapse, in a moment of weakness, he showed those photos, and he has regretted it every day of his life.’

The defense lawyer urged jurors to look past the grief of those who brought the lawsuit and focus on the matter before them.

‘There is no doubt these families have suffered,’ she said. 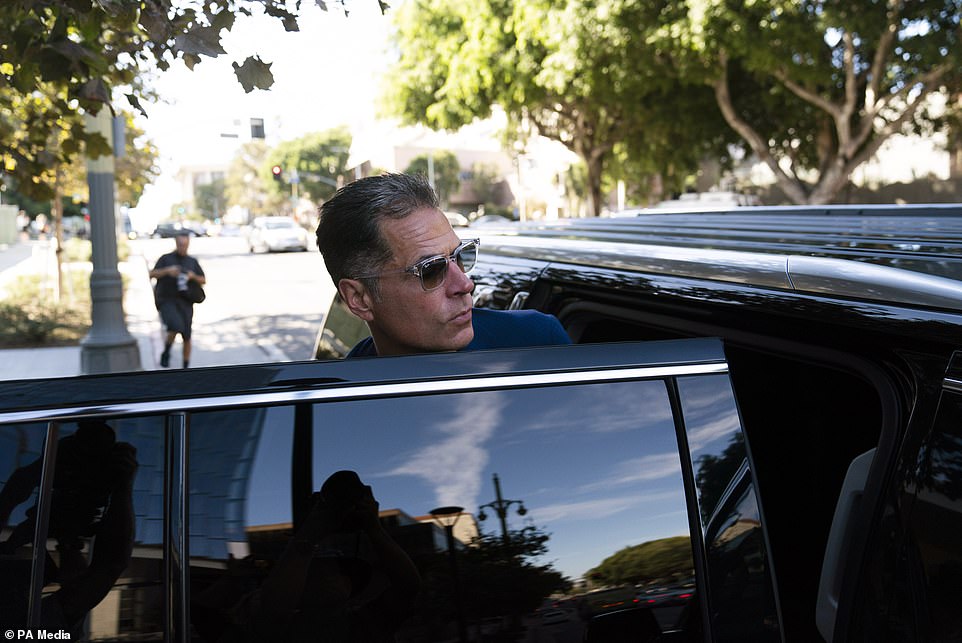 ‘It’s unspeakable. But this case is not about the loss from the crash. It’s about the pictures.’

Chris Chester, whose wife, Sara, and daughter Payton were also killed in the crash, is also a plaintiff in the lawsuit, which seeks unspecified millions.

The county already agreed to pay $2.5 million to settle a similar case brought by two families whose relatives died in the crash on January 26 2020.

Bryant and Chester declined to settle.

The trial is expected to last about two weeks and witnesses will likely include Vanessa Bryant and LA County Sheriff Alex Villanueva.

Kobe Bryant, Gianna, and other parents and players were flying to a girls’ basketball tournament when their chartered helicopter crashed in the fog.