Victoria is being urged to adopt a target of replacing all public buses with electric vehicles by the end of this decade, to accelerate what transport experts say is an essential step in tackling the state’s carbon emissions.

Research by the Australia Institute has ranked Victoria’s approach towards zero-emissions buses as the second most ambitious in the country, with a commitment to only buy electric buses from 2025. 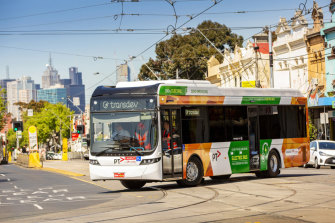 But Audrey Quicke, one of the think tank’s climate and energy researchers, said Victoria should match NSW’s commitment to convert all of its public buses to renewable-powered electric buses by 2030. The ACT has the same ambition for 2040.

“Buses roughly last around 20 years, so if you’re still buying diesel buses in 2024, you’re looking at a long time before you have a zero emissions fleet,” Quicke said. “What we need is some of those targets from all states and territories.”

Transport is the third-highest emitting sector of Australia’s economy. But the uptake of electric vehicles has been slow by international standards, making up about 2 per cent of new car sales compared with 4 per cent in the US and 17 per cent in Europe.

Public transport minister Ben Carroll said the state was transitioning its 4000-strong bus fleet to zero emissions in a “phased and sustainable way that represents value for taxpayers’ money”.

”Tackling emissions in the bus industry is critical to Victoria meeting its legislated commitment of net-zero emissions by 2050, and we have the plan to achieve that,” he said.

Victoria launched a three-year zero-emissions bus trial in April, and will deploy 41 electric buses in Melbourne, Seymour and Traralgon by the year’s end. It expects 78 will be on the road by mid-2025.

Public Transport Users Association Victoria president Tony Morton said he supported accelerating the state’s shift to electric buses, which were not only greener but quieter and more comfortable as well.

“While it’s great to imagine having your own Tesla and charging it from your own solar panels… it’s much easier to electrify buses that cary 20 to 50 people at once,” Morton said.

Quicke said the biggest obstacles in the shift to electric buses were the need to install charging infrastructure at depots, and the higher initial purchase cost of $550,000 to $900,000 per bus, compared with $480,000 for a diesel model. Costs were falling, however, and were competitive when factoring in the vehicle’s life-long fuel saving, she said.

Victoria’s first locally built electric bus rolled out of the Volgren’s Dandenong workshop in early 2020 and saved 61 tonnes of carbon dioxide emissions in its first 300 days of service when it was deployed on routes 246 and 251 as part of a trial.

NSW has launched a massive public transport program that will involve buying 8000 new zero emissions buses to hit its target, and the government has said the “vast majority” of them will be built in the state.

The Australia Institute’s report also says the country should encourage greater public transport patronage, alongside electrification, to curb rising transport emissions and other pollution. Federal support in the form of research into local electric bus manufacturing and funding for specialist mechanics is also needed, it says.

The report found seven out of 10 Victorians supported adopting NSW’s 2030 electric bus target and one in 10 opposed it, based on a survey of 600 people.

Several countries have made 100 per cent bus electrification commitments as part of their national decarbonisation strategies, including the Netherlands (2030), New Zealand (2035) and Denmark (2030, in cities only).

A guide to the environment, what’s happening to it, what’s being done about it and what it means for the future. Sign up to our fortnightly Environment newsletter here.