Victoria’s budget deficit is predicted to blow out to $19.5 billion this financial year, an increase of nearly $8 billion in the shortfall between revenue and spending the state government predicted in May.

The state budget update, published on Friday morning, also predicts the state will be more than $6 billion deeper in debt in four years, with Victoria set to owe bondholders more than $162 billion in net terms by 2025. 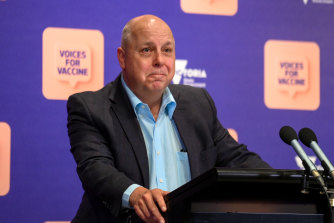 Friday’s figures, show the government’s revenue surging past a record $77 billion, but spending at almost $97 billion, with Treasury laying the blame for the significant deterioration in the state’s public finances squarely on the outbreak of the Delta variant of COVID-19.

“The outbreak of the Delta variant of COVID-19 and the associated necessary public health restrictions, required additional short-term government financial assistance to strengthen the public health response, including additional testing capacity and support of the vaccine rollout,” the budget update reads.

The budget position downgrade comes despite revenue from the government’s two main property taxes, stamp duty and land tax, soaring by nearly 20 per cent to $7.7 billion and by 32.6 per cent to $4.3 billion in 2021-2022.

The report shows the government is due to spend more than $10 billion more than predicted earlier this year, mostly on the fight against the Delta variant outbreak and the various business and community support measures associated with the lockdowns.