Washington: The United States condemned violence against demonstrators opposed to the military coup in Myanmar, saying everyone had a right to freedom of expression and peaceful assembly, State Department spokesman Ned Price said on Tuesday, local time.

“We repeat our calls for the military to relinquish power, restore democratically elected government, release those detained and lift all telecommunication restrictions and to refrain from violence,” Price said in a briefing. 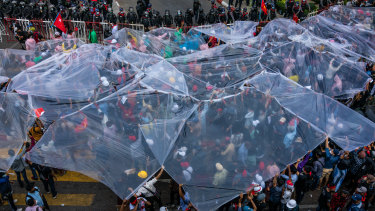 Protesters cover themselves with large plastic sheets to protect themselves from possible water canons in Yangon, Myanmar. Credit:Getty

Police and protesters clashed in Myanmar on Tuesday in the most violent day of demonstrations against the February 1 coup in which generals led by army chief Senior General Min Aung Hlaing overthrew elected leader Aung San Suu Kyi.

One woman was unlikely to survive a gunshot wound to the head, a doctor said.

The clashes led to the first bloodshed since the military took over and detained Suu Kyi and other politicians from her National League for Democracy (NLD), which won a November election in a landslide.

The military said the NLD won by fraud – an accusation dismissed by the election committee and Western governments.

US spokesman Price repeated what he said last week that Myanmar was a priority for Washington and it was reviewing US assistance provided to the southeast Asian country, “with an eye towards ensuring that those responsible for this coup do face significant consequences.”

The administration of President Joe Biden has been working to restrict some aid to Myanmar and has threatened to impose sanctions.