Home » World News » Were the White Island victims unlucky, or is the system at fault?

Were the White Island victims unlucky, or is the system at fault?

An active volcano given to what scientists describe as "impulsive, short-lived" eruptions doesn't sound perfect for tourism.

But taking in such a volcano is a must-see for many visitors and in New Zealand the experience can be quick, accessible and well priced. 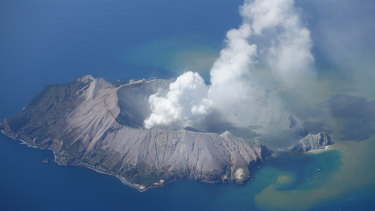 Mount White, named by Māori as Te Puia o Whakaari (dramatic volcano) is especially good for time-pressed tourists. By boat it's about 80 minutes and, with an hour on the island, it can be done in half a day. About 18,000 tourists visit the volcano each year.

Visitors probably think more about price ($229 by boat) than risk although they will soon get the idea the island is no ordinary walk in the park.

White Island Tours, the official tour operator for the island and owned by local iwi Ngati Awa, warns its passengers: "There is always a risk of eruptive activity regardless of the alert level."

The risk is reinforced by safety briefings, the signing of waivers and the distribution of safety gear including a gas mask and hard hat. 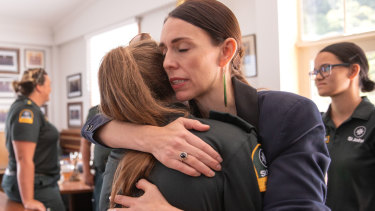 Visitors, essentially trusting that everyone knows what they are doing, would be entitled to assume that if the tours were allowed to operate, the risk was low. Perhaps as low as flying in a helicopter or doing a bungy jump.

Adventure tourism is inherently risky. That is part of the attraction. So were the visitors of White Island on Monday just incredibly unlucky or were there faults in the system? And were the tour operators, who had a vested interest in ensuring the trips went ahead, negligent in the way they assessed the risks?

A volcano with form

White Island is a two kilometre-wide, 321-metre high tip of a 1.6 kilometre submarine mountain about 48 kilometres from Whakatāne in the Bay of Plenty region of New Zealand's North Island.

It has been active for more than 150,000 years, sending gas, ash and blocks of rock into the air at irregular intervals.

The period between 1975 until 2001 had frequent small eruptions, making it the island's most active period in hundreds of years.

It has erupted several times in the past 20 years with an outburst in August 2012 that coincided with a similar event at Mountt Tongariro. Within a few months, its prized crater lake, coloured an unusual green, was gone after the island spewed lava – appearing on the surface as a black, craggy dome.

In October 2013, the volcano filled the sky again with a moderate eruption that could have killed anyone who was near at the time.

Sulphur was mined on the island between the 1880s and 1930s. In 1914, 11 miners were killed by an avalanche when part of the crater rim collapsed. 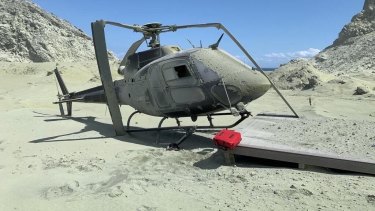 The helicopter destroyed by the White Island eruption (stuff.co.nz).

People have visited the privately-owned island for decades. It was bought by Auckland share broker George Buttle in 1936 and, although the government tried to buy it back in the 1950s, a compromise was reached and it was declared a private scenic reserve in 1953, making it subject to the Reserves Act 1977.

In 1997, the Buttles appointed Ngāti Awa as the official guardian of the island and its company, White Island Tours, is the main boat tour operator.

Monday's eruption was pretty much the same as many of the small and large eruptions over the last millennia.

Crown Research Institute GNS Science vulcanologist Geoff Kilgour said the initial eruption on Monday lasted a few minutes and was similar to a 2016 eruption when a similar size plume was produced.

"There were some rather substantial rocks that were thrown out and kind of a ground-hugging flow was sent across the crater floor to the sea, which is about a kilometre away from the vent," Kilgour said. 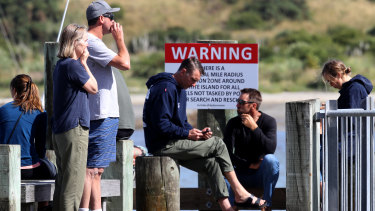 People comforting each other at Whakatane following the White Island volcano eruption.Credit:Getty Images

GNS vulcanologist Michael Rosenburg says the increase of sulphur gas and an increase in tremors do not amount to a strong signal.

Nevertheless when an eruption does arrive, it gives little warning.

Kilgour describes them as going from "nothing to something" within a couple of seconds.

"It's a bit like a lighting strike, sure they happen and they're quite rare but they happen in a short instance. It's very unfortunate for people to be on the island during an eruption in general, especially if they don't go to the island all the time," he said.

"For a tourist they are there once in their life and it's a very rare occasion."

His colleague Sherburn said scientists detected higher amounts of sulphur dioxide for most of the year.

"But we haven't, for example, seen the disturbances in the volcanic crater lake. It's been quite stable for several weeks. Some of the temperatures from some of the steam vents we've measured on the island have been going down, not going up," he said.

Tour operators such as those running trips to White Island work under the Health and Safety at Work (Adventure Activities) Regulations 2016.

The regulations require adventure activity operators to undergo a safety audit and register with WorkSafe NZ before advertising or providing the activity for payment.

A land owner or manager is considered to be a Person Conducting a Business or Undertaking (PCBU) under the regulations and, as a result, they are a "duty holder".

Where there is payment for use of land for adventure activities, e.g. a seasonal payment or a percentage of any admission fee paid, the land owner or manager "must take all practicable steps to ensure that the adventure activity is conducted safely".

White Island Tours appears to be the only White Island operator registered with WorkSafe and has previously won safety awards.

WorkSafe says getting tourists to sign waivers does not absolve employers from their obligations under the Health and Safety at Work Act.

Employers have to ensure, so far as it is reasonably practicable, the health and safety of their workers and other people who could be put at risk.

Bill Hodge, a former law lecturer at University of Auckland, said tourists could not take personal civil action against tour operators in New Zealand unless they sought punitive damages, claiming the operators had been irresponsible.

Compensation could not be sought for injuries because of the ACC system.

Various agencies and emergency services have responsibilities over White Island.

In 2017, the Government and the Bay of Plenty Civil Defence Emergency Management Group signed a memorandum of understanding setting out responsibilities around readiness and response to an eruption.

But the volcano doesn't appear to come under the authority of any city or district council, which would usually have had these responsibilities under the Civil Defence Emergency Management Act 2002. 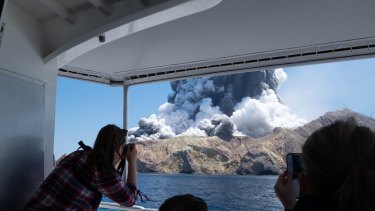 Michael Schade took this photo as the eruption threw an ash plume about 3600 metres high.Credit:Michael Schade

At the time, the group's chair, former Tauranga mayor Greg Brownless, said staff would liaise with tour operators "to ensure the risks to visitors on the island are managed appropriately", along with GNS Science, which regularly communicated to the public about the island, and with police, to ensure any search and rescue plans for the island were current.

Emeritus Professor Ray Cas, from the School of Earth, Atmosphere and Environment at Monash University in Melbourne, has visited White Island twice and believes the risks faced by daily boat and helicopter tour groups are too great.

"White Island has been a disaster waiting to happen for many years. I have always felt that it was too dangerous," Cas said.

His explanation of an eruption highlights the dangers he is talking about.

An explosion ejected hot rock, sometimes also fresh magma, large volumes of volcanic gas and superheated steam. These produced a hot plume of gas and rock that rose to potentially heights of thousands of metres.

"The temperature of the erupting mass can be several hundred degrees Celsius. Hazards include rock projectiles, noxious gases and burns from the hot gas cloud," he said.

New Zealand Prime Minister Jacinda Ardern has told Parliament there will be "bigger questions in relation to this event".

"These questions must be asked and must be answered," Ms Ardern said.

Those answers will show whether academics like Professor Cas are right and that yet again a tragic event was needed to highlight gaps in New Zealand's adventure safety systems.