The state government will fork out an extra $1.9 billion on its delayed West Gate Tunnel project that will end up costing almost twice as much as was first thought, adding to the state’s $19.5 billion budget deficit and soaring debt level.

The government considered pausing the project and finding a new builder after 13 months of gruelling negotiations involving Transurban, which instigated the project, and builders John Holland and CPB Contractors that ended in mediation. 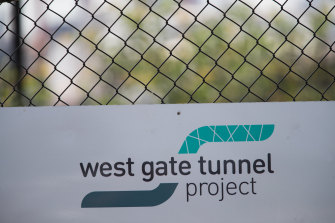 A deal on the West Gate Tunnel’s cost blowout is close to being reached.Credit: Jason South

Ultimately, the government determined that changing builders would lead to almost $7 billion in extra costs and add two years to the construction time. It also realised the massive blowout was mostly driven by a significant underbid by the companies, rather than the unexpected discovery of contaminated soil.

The Age confirmed an agreement was about to be struck on Wednesday and a cabinet sub-committee signed off on the deal on Thursday evening, paving the way for tunnelling to start as early as March. The government hopes the tunnel will be completed by late 2025, two years later than planned.

The government will chip in just under $2 billion more, while Transurban will pay an extra $2.2 billion and the builders will forego $1 billion. The road project was originally set to cost $5.5 billion, but the final contract for the toll road was $6.7 billion. The price tag now looks set to rise to about $10 billion.

Transport Infrastructure Minister Jacinta Allan said the negotiations were “complex and difficult”. The government has repeatedly criticised the infrastructure companies for their behaviour in the dispute.

“Victoria needs the West Gate Tunnel project to provide an alternative to the West Gate Bridge, take thousands of trucks off local roads in the inner west and slash travel times,” Ms Allan said in a statement.

Treasurer Tim Pallas, said the project was vital and would protect thousands of jobs.

“The deal we have reached means that both Transurban and the state will make a significant additional contribution to the project, Transurban will forego years of toll revenue and CPB-John Holland give up all of its profit margin and make significant losses,” Mr Pallas said in a statement.

The long-running dispute centres on the handling of about 3 million tonnes of soil, with an unknown portion of it believed to be contaminated with per- and polyfluoroalkyl chemicals – the potential carcinogens known as PFAS. 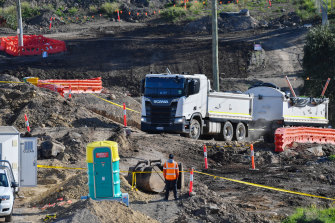 The tunnel linking the West Gate Freeway in Yarraville with CityLink at Docklands was set to open this year but is running years behind schedule due to the soil crisis. A separate legal case between the three parties over the project’s cost blowouts is still ongoing.

This is the second deal the Andrews government has reached in a year on the payment of a multibillion-dollar blowout on a major transport project. In December last year, the government agreed to pay half of the Metro Tunnel’s $2.7 billion overrun, with the other half paid by the project’s building consortium.

At an investor meeting in August, Transurban revealed it was expecting a $3.3 billion blowout. The project’s builders were at the time claiming the cost of the project had grown by as much as $5.2 billion. The government has already allowed Transurban to charge drivers for another 10 years on CityLink, but they will not be allowed to extend this to recoup the additional costs on the West Gate project.

Over-budget infrastructure projects are contributing to Victoria’s worsening financial position. Last week, Victoria’s budget deficit was forecast to rise by more than $8 billion to blow out to $19.5 billion this financial year. It also predicted net debt would increase more than initially predicted to $162 billion by 2025 compared with NSW’s $104 billion in the same year.

Victoria’s bulging infrastructure spending has been cited by rating agencies as a reason for Victoria’s downgraded credit rating.

Shadow Treasurer David Davis said Victorians were already paying for the over-budget project through higher tolls on other roads, which they would continue to pay for “eons”.

“This is a monumental cock-up by Daniel Andrews and his incompetent ministers,” he said. “The mismanagement of Andrews, Jacinta Allan and Tim Pallas is behind the blunders in this cosy, Labor-linked deal.”

“Victorians are already paying a heavy price when they drive home, and they will continue to pay.“

Australian Workers’ Union secretary Ben Davis said the deal was good news “for those who just want the tunnel to actually be built”.

“It’s taken far longer than it should have. Let’s get on, employ some people and dig the tunnel.”