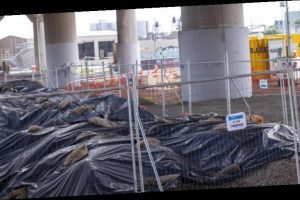 Tolling giant Transurban has admitted the West Gate Tunnel’s 2023 completion date will no longer be achieved due to difficulties disposing of the project’s three million tonnes of contaminated soil.

The toll road was originally set to finish in 2022, but Transurban told investors last year the project would be finished in 2023 due to the soil crisis.

Posters along work sites on the West Gate Freeway promising a 2022 completion date were removed. 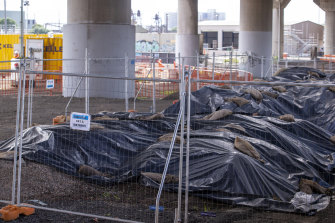 But the delayed 2023 completion date will be pushed out yet again – Transurban told investors as it released its half-year results on Thursday morning.

“Due to the availability of disposal sites to accept tunnel spoil, and following a project schedule review taking this timing into account, 2023 project completion no longer considered achievable,” the company documents state.

“Commencement of tunnelling requires resolution on a range of matters, including achievement of remaining approvals, preparatory works and progressing commercial matters.

“Legal and commercial avenues for resolution of commercial matters and claims are being pursued.

“Transurban remains committed to working with the D&C subcontractor and the State to resolve the challenges on the project.”

It comes as the Andrews government is being sued by a group of residents in Melbourne’s west and Melton council in Melbourne’s west over plans to dump soil contaminated with potentially carcinogenic PFAS chemicals from the West Gate Tunnel in landfills located close to homes.

The residents, from Moorabool Environment Group, had a major legal triumph in December when they forced the Environment Protection Authority to quash all of its environmental approvals for landfills accepting the project’s soil, after they pursued the regulator in court.

Builders John Holland and CPB Contractors are in a separate legal dispute with Transurban over the builders’ attempts to quit the project.

Treasury documents leaked to The Age late last year forecast a $3 billion blowout on the project.

Transurban said on Thursday that “significant progress” had been made on two of the three major sections of the project, despite tunnelling not yet starting.

Intensive summer works program underway on the West Gate Freeway and major foundation structures for the new bridges and ramps over the Maribyrnong River are now complete, while support structures are well progressed in preparation for the road deck that will connect the tunnels to Footscray Road and CityLink.