Home » World News » What does today's mini-Budget bonfire mean for YOU?

What does today's mini-Budget bonfire mean for YOU?

What does the mini-Budget bonfire mean for YOU? Families could see £1,000 added to their energy bills from April and income tax WON’T be cut, but pain will be offset by lower national insurance while homebuyers benefit from stamp duty changes

Families could be stung for an extra £1,000 under cost-saving measures announced by Jeremy Hunt today.

The new Chancellor announced a range of reversals from Kwasi Kwarteng and Liz Truss’s emergency Budget on live television as he sought to placate the financial markets.

But while the markets may have been calmed – at least initially – the changes announced by the new finance chief are likely to have a direct impact on Britons that could leave them worse off.

In an emergency statement, Mr Hunt said the energy price guarantee – which had been due to cap prices for two years – will end in April after which time the Government will look to target help on those most in need.

He said that he is abandoning plans to cut the basic rate of tax by 1p – which had been due to be brought forward to April – and that it would remain at 20p in the pound until the country can afford to reduce it.

The cut in dividend tax promised by his predecessor will also go, along with VAT-free shopping for overseas tourists, the freeze on alcohol duty and the easing of the IR35 rules for the self-employed.

Mr Hunt said the tax measures alone would bring in £32 billion after economists estimated the Government was facing a £60 billion black hole in the public finances.

In a televised statement, the Chancellor – who only took office on Friday – warned of more ‘tough’ decisions to come.

Here we look at what that might mean for the man and woman on the street: 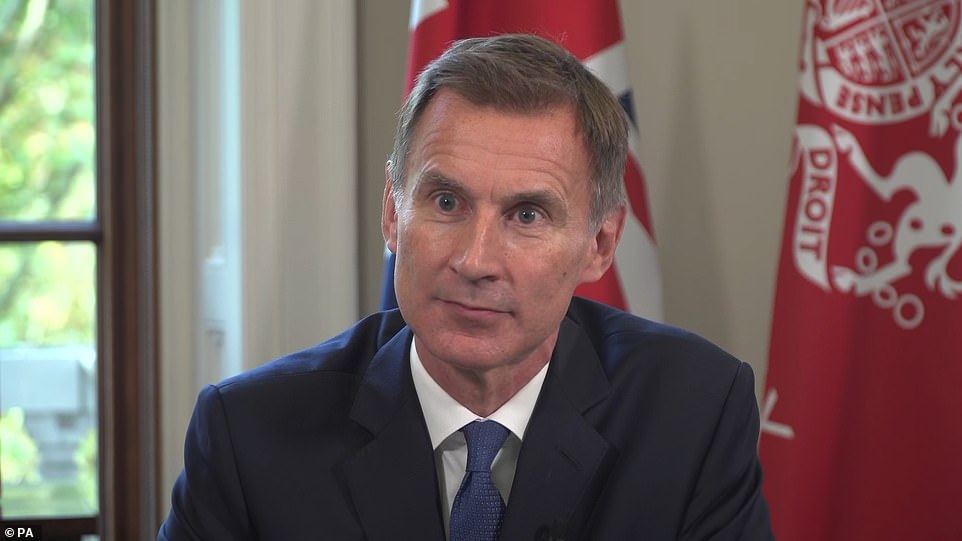 The new Chancellor announced a range of reversals from Kwasi Kwarteng and Liz Truss’s emergency Budget on live television as he sought to placate the financial markets. 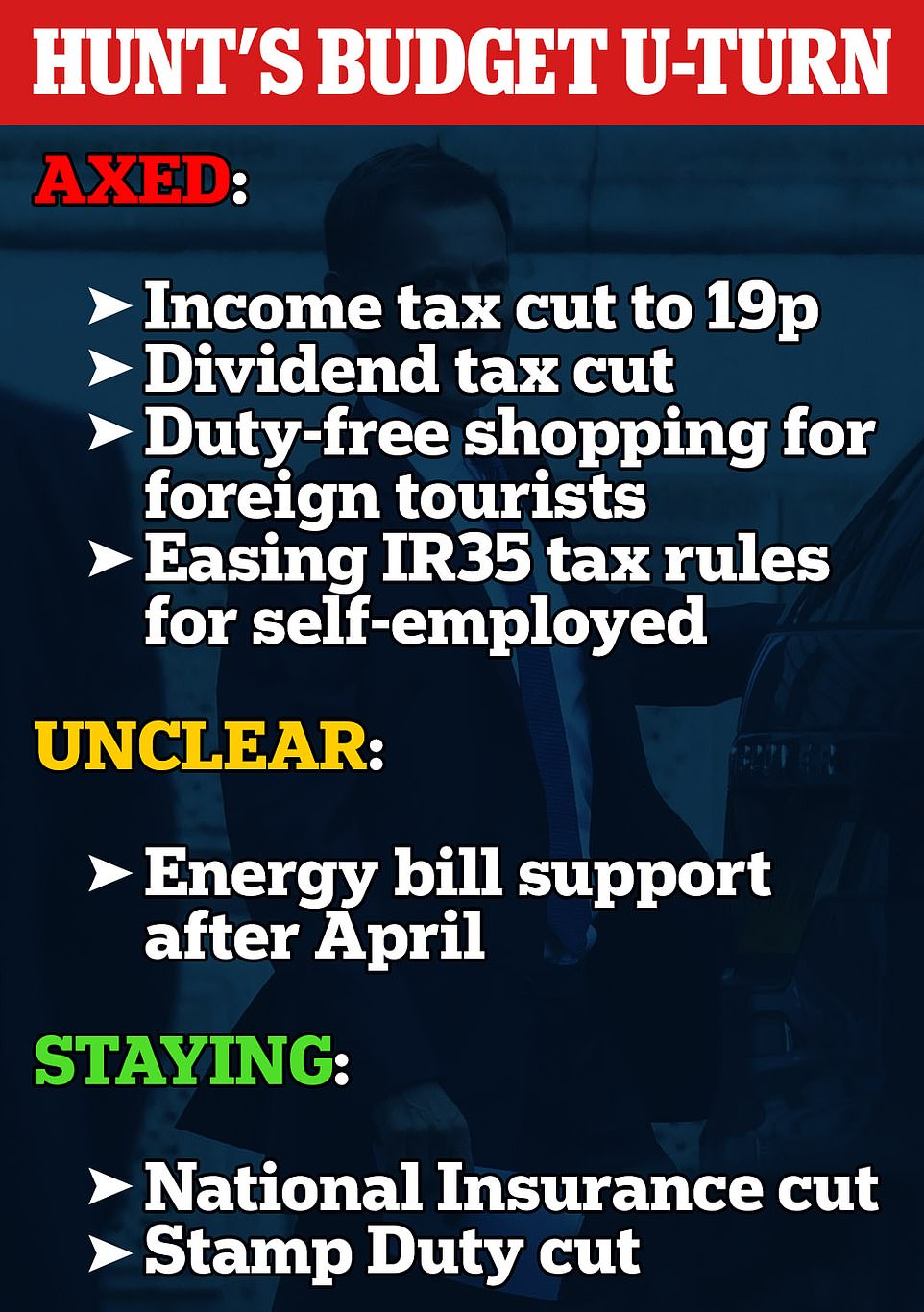 WHAT WILL HAPPEN TO MY ENERGY BILLS?

In the short term, nothing will happen. Shortly after taking over from Boris Johnson, Liz Truss announced a major intervention in the energy market to combat a massive rise in prices. That will remain in place throughout the winter.

The energy price guarantee saw ministers pour money into the domestic gas and electricity market to underwrite costs. In practice this means that the average bill – not all bills – will be £2,500 this winter.

But the big change could come next year. Under the original plan the guarantee would stay in place for two years to smooth over any market volatility. That is no longer the case.

Mr Jeremy Hunt announced that help with energy bills for households will only last until April, with a review to find a ‘new approach’ that will ‘cost the taxpayer significantly less’ after that.

This means that it is likely to be be vastly reduced in scope, meaning that only the least well-off would benefit from help. Everyone else could find themselves at the mercy of the original Ofgem price cap.

Prior to the announcement, bills for those not on fixed contracts were in line with the energy price cap set by the  industry watchdog.

The Government’s cap would therefore have saved customers typically around £1,000 on what they would have otherwise paid. This money could therefore be re-added to bills in April.

Ofgem is set to review its price cap once again in April 2023, which means bills could fall as the weather warms and use falls. But global factors such as the war in Ukraine could also continue to affect prices.

HOW WILL THEY DECIDE WHO CONTINUES TO GET HELP?

That is not yet clear.  There is no obvious mechanism that would allow a means-tested system to be introduced.

The obvious way for it to work would be to continue aid only for the six million people who are on Universal Credit, whose details are already in the system.

WHAT ABOUT TAX CUTS, ARE THEY STILL HAPPENING?

Jeremy Hunt today killed off most of the remaining tax cuts promised in the Kwarteng/Truss Budget. But some will remain, offering a glimpse of hope for household budgets.

Plans to cut the basic rate of income tax from 20 per cent to 19 per cent from next year has been cancelled indefinitely, so the extra cash that would have offered has been removed.

An average UK earner on a £30,000 salary will lose a £174 boost that would have come next year under the cut, according to analysis.

However, they will still be around £218 better off due to the scrapping of the 1.25 percentage point increase in national insurance (NI), which has been kept in place, according to wealth managers Quilter.

The Government had been set to cut the basic rate of income tax to 19 per cent from April 2023.

But now, among a range of policies previously announced in the mini-budget which will no longer be taken forward, the basic rate of income tax will remain at 20 per cent indefinitely, until economic circumstances allow for a cut.

Rachael Griffin, a tax and financial planning expert at Quilter. said: ‘The latest U-turn on a policy-that-never-was sees the reduction in income tax from 20 per cent to 19 per cent from April 2023 scrapped.

‘However, they will still benefit from (Kwasi) Kwarteng’s abolition of the 1.25 percentage point increase to national insurance which (new Chancellor Jeremy) Hunt has kept in place, saving them around £218 next year.

‘A higher earner on an annual salary of £100,000 will now pay £377 more in income next tax year, while benefiting by more than £1,000 from (Mr) Kwarteng’s previous national insurance hike reversal.’

‘It is clear that (Mr) Hunt’s emphasis will be on balancing the books, so it is likely that tax allowances and thresholds are not going to become more generous any time soon.

‘The income tax cut would actually have been net positive for Government coffers by 2025/26 due to frozen thresholds catching more people in the tax net.

‘As such, it is now even more vital for individuals to utilise the tax allowances they have as much as they can and take advantage of the situation today.’

I’M BUYING A HOUSE, WHAT ABOUT STAMP DUTY?

There are no plans to change the stamp duty allowances. The house moving tax was slashed by Kwasi Kwarteng as the Government sought to stimulate the housing market and help more families into their first homes.

The former Chancellor raised the threshold at which stamp duty is paid from the first £125,000 of a property’s value to £250,000, good news for people upsizing.

Stamp Duty is determined by the value of a property and can run into tens of thousands of pounds.

A stamp duty holiday introduced by former chancellor Rishi Sunak during the Covid crisis came to an end last year. Spikes in demand were seen during the holiday as buyers rushed to maximise their savings.

According to the most recent Office for National Statistics (ONS) figures, the average UK house price leapt by 15.5 per cent annually in July, marking the biggest increase in 19 years.

The jump in annual inflation was mainly because of ‘a base effect’ from the falls in prices seen this time last year, as a result of changes in the stamp duty holiday, the report said.

WHAT DO THE EXPERTS SAY?

Mike Foster, chief executive of the Energy and Utilities Alliance said: ‘News that the energy price cap protection coming to an end in April will surprise and worry millions of hard-pressed families. Together with the announcement that promised tax cuts have also been withdrawn will heap huge financial pressure onto those already struggling to pay their bills.’

‘The Treasury-led review to support families in the future looks like an excuse to cut support in these uncertain times, when we don’t know what energy prices will be. While all this is happening, the Government’s own Boiler Upgrade Scheme hands out £5000 subsidies to the well off to change their heating, while millions struggle to pay their bills. It’s immoral in these difficult times and needs to be culled, with the money used more wisely.’

‘This reinforces our view that in the longer-term we need to switch away from fossil gas and switch our gas network to hydrogen. We can produce ourselves and free us from the global gas markets that Putin’s war has massively impacted.

Laura Suter, head of personal finance at AJ Bell, said: ‘People have had yogurt in their fridge that’s lasted longer than some of the Government’s planned tax cuts. It means that when April arrives people will no longer get that extra boost to their pay packets… it means someone earning £25,000 will pay an extra £124 a year while someone on £50,000 will pay £374 more in tax a year.’

Rebecca McDonald, chief economist for the Joseph Rowntree Foundation, said: ‘The Chancellor is moving quickly in extraordinarily challenging times to try to bring stability to the markets. Families on low incomes, trying to afford the essentials, pay their rent, and keep food on the table, desperately need that stability too.

‘He could and should confirm today that the government will uprate benefits in line with Wednesday’s inflation figure to ensure that the UK does not face historic levels of hardship on his watch – the polling shows the public agree that this is the right thing to do.

‘The cost of living crisis continues to intensify for many families, who are approaching the winter with an increasing sense of fear. The review on help with energy bills is important but ongoing support must be effectively targeted at those who need it.’