Howard Schultz began another return to Starbucks (SBUX) on Monday, starting his third run as CEO following the retirement of Kevin Johnson.

As interim CEO, Schultz is taking over a company faced with a growing national unionization campaign, a stock that is down more than 21% in 2022 so far, and COVID-19 lockdowns in China bringing uncertainty to the company's second largest market.

"Our company, like many companies, is facing new realities in a changed world," Schultz wrote in a letter published on Monday. "Pinched supply chains, the decimation caused by COVID, heightened tensions and political unrest, a racial reckoning and a rising generation which seeks a new accountability for business."

The first action in the latest Schultz era, which is expected to last until a new CEO is found, was a suspension of stock buybacks so that the coffee chain could "invest more profit into our people and our stores — the only way to create long-term value for all stakeholders."

It's unclear how exactly Schultz views the current unionization efforts.

In November 2021, Schultz traveled to Buffalo, N.Y. a few days before partners (as the coffee giant's employees are known) at three Buffalo-area stores received their ballots to begin voting in a union election.

In a letter titled "From Buffalo with Love," which Schultz said he was writing from Buffalo, he detailed how he built Starbucks with the mindset of "creating a company of partners that aspired to build a for-profit company imbued with love, social conscience and shared success based on shared responsibility."

"What the leadership team has done in Buffalo is what we have always done," Schultz also wrote. "We listen. We learn. We get better together. No partner has ever needed to have a representative seek to obtain things we all have as partners at Starbucks. And I am saddened and concerned to hear anyone thinks that is needed now."

Baristas in Buffalo voted to unionize on Dec. 9, becoming the company's first U.S. location to do so.

Schultz previously dealt with pointed partner concerns. Jaime Prater, who had worked in Starbucks stores for nearly 10 years before leaving the company in 2018, created an online petition in mid-2016 that said a "lack of labor is killing morale" at the chain. Schultz ended up calling Prater. 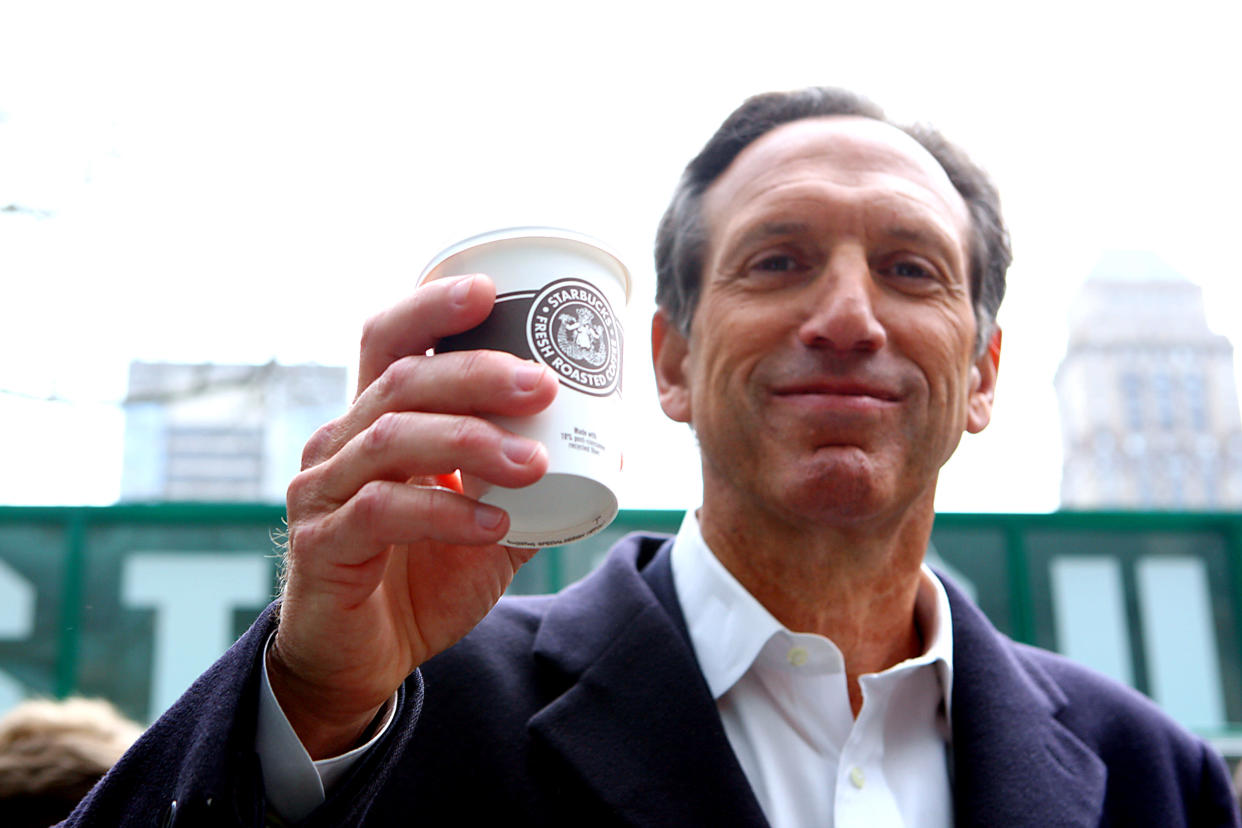 At the time, Prater told Yahoo Finance, "hours started being slashed, not just at my store, but at all the stores, essentially all over the country." Additionally, "Starbucks, quarterly reporting was down. They were not meeting their forecasts and not by tons, just by a little bit, but they weren't meeting them."

Prater recalled that "I had a conversation with my store manager and she said, 'They want us to go through each schedule that we make and take 40 to 70 hours out of each schedule each week.' So what was that doing to the workforce? It was debilitating us. It was absolutely debilitating us. And there were some other things at play at the same time… which was new partners would be hired on for almost the same amount of money that a partner who had been working in the store for five years had been making."

He explained that "Starbucks had been playing with lean staffing, which means let's have the least amount of people on the floor as possible and have them trained so that they can do as much as possible. That's been in Starbucks wheelhouse for a few years now, and they use the term 'lean' to make it not sound like… [but] what they're actually doing is cutting labor and saving money."

Following the launch of the petition, Prater "used to get email after email… sometimes three and four a day from people struggling. From a mother in like New Jersey saying: 'Me and my husband both work for Starbucks and they've cut our hours to 15 hours a week, when we have a baby and we don't know what to do, and we don't know where to go.'"

Following the call, according to Prater, Starbucks made adjustments that included raising wages, adding "some more stock options," giving bonuses, and introducing a new dress code. "All of these things were implemented," Prater recalled. "But again, they were dealing with symptoms by throwing out [all] sort of money and ideas, but they weren't changing what really needed to be changed."

Those constant demands have helped fuel the drive toward unionization and worker demands for better pay, improved staffing conditions, and more influence in company affairs. 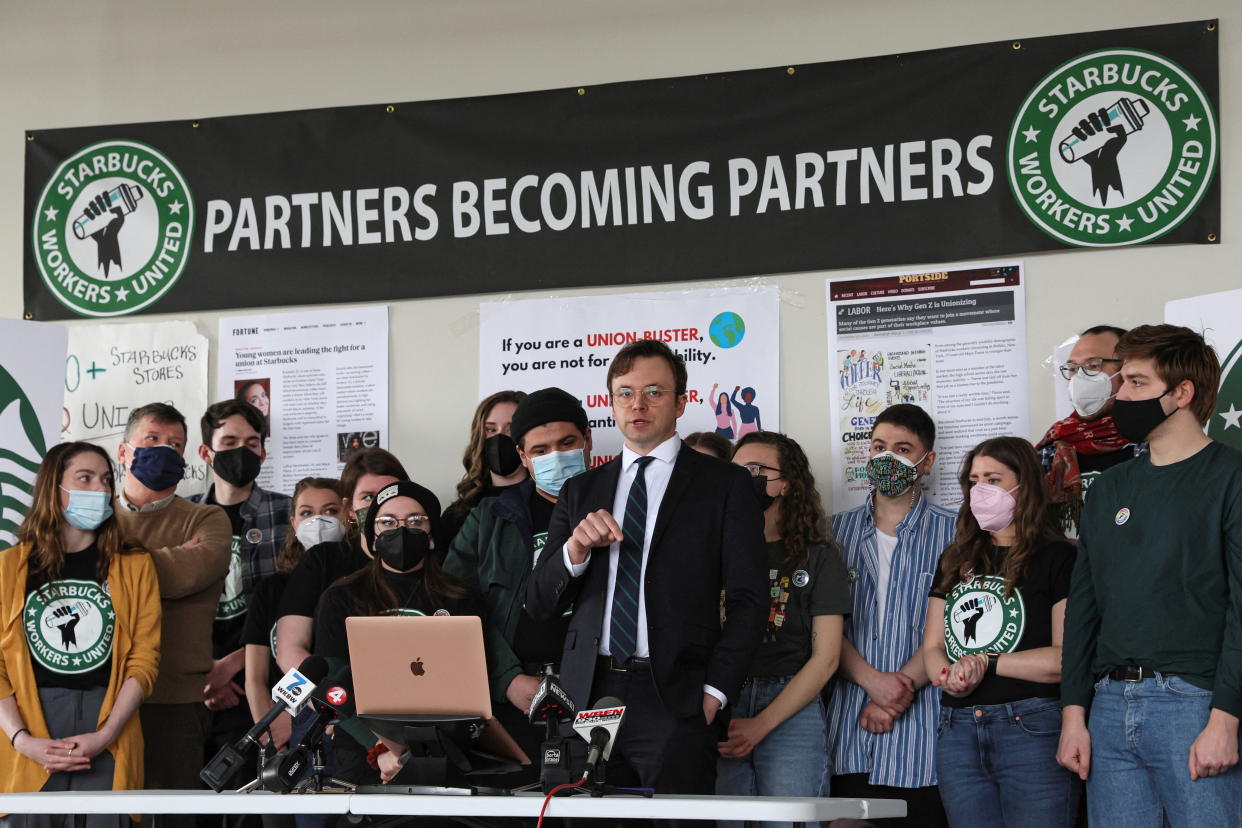 More than 170 of 9,000 U.S. corporate stores have filed petitions to organize with the Starbucks Workers United union while 76 unfair labor practice cases have been opened against Starbucks, according to the National Labor Relations Board (NLRB). Nine stores have successfully voted to unionize.

The company has begun holding "To be partner" meetings to ensure that partners understand what it means to wear the green apron. A Starbucks spokesperson told Yahoo Finance that those meetings started last week and will continue until April 24.

"It's disheartening to see… years later, nothing's much has changed and people are still signing," Prater said. "If things had changed enough, people wouldn't be still signing that petition. I mean, you're always gonna have people where it's never gonna be enough and I think that's important to note."