A crowdfunding campaign led by local musicians has saved Melbourne record store Basement Discs from closing after 28 years in business.

Owners Suzanne Bennett and Rod Jacobs were struggling to pay the rent on the store in the basement of Block Arcade, with business down by up to 80 per cent following the coronavirus pandemic. 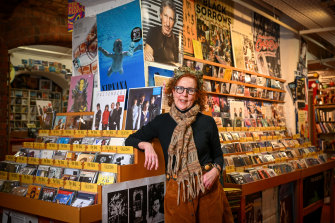 Suzanne Bennett, co-owner of Basement Discs, was worried she would have to close the store. Credit:Eddie Jim

Jacobs also battled cancer during the lockdowns and has since been given the all-clear.

“It’s been an incredibly emotional and stressful journey on every level,” Bennett said. “He [Jacobs] said to me a couple of times during the full-on two years it’s like being stuck on the bench seeing your team being pummelled and not being able to get out there and do your bit.”

Bennett said, although the store’s landlord had been “very supportive” through the lockdowns, offering financial relief, it had struggled to pay its rent since reopening.

“That perception seems to be out there that ‘Oh, it’s business as usual, the city’s open again, and everybody’s hunky-dory’. Well, it’s so not, obviously,” she said. 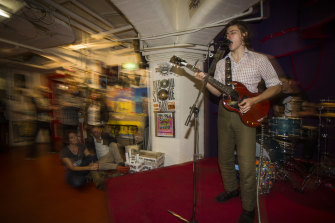 An in-store gig at Basement Discs in the Block ArcadeCredit:Meredith O’Shea

“Almost six months down the track of reopening officially, with no government support any longer. it’s continued to be a very, very difficult, very challenging scenario, keeping your business going.”

Bennett said an email from the landlord requesting rent arrears left her worried she and Jacobs would have to close Basement Discs.

“We didn’t have options of remortgaging or borrowing against anything after two years of just horror cashflow and diminished takings,” she said. “I looked at loans to try and raise the money and because of the whole last two years the best I could do was 19 per cent interest. We were just digging ourselves into a deeper and deeper hole.”

“We believe in Basement Discs and the story of Basement Discs is we are trying to do everything we can to help them,” he said. “We don’t want to see them as a charity case because they wouldn’t want that either. The money owed is $10,000 for 12 months, which is very little for the huge space that they occupy.”

Musician Alison Ferrier was in the store when she heard of Basement Discs’ problems. She suggested a crowdfunding campaign.

“I’m an independent musician, and they’ve always been a great support to me, stocked my records, and I’ve done in-store performances there,” Ferrier said.

“I just remember one time [Bennett] just telling me how awful things were and that it might be the end of the road for them. She just was feeling defeated and exhausted and didn’t know if she could continue.” 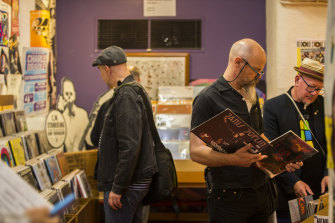 Ferrier and her husband, fellow musician Jeff Lang, started a crowdfunding campaign ‘Save Basement Discs’ to raise $15,000. They raised $25,000 for the store within a week.

Bennett said she was hesitant to participate in the crowdfunding campaign as the extent of the store’s problems were “humiliating and embarrassing”.

“I thought what if nobody donates? There are so many great and worthy causes out there, who really care about one little record store in the whole scheme of things?,” she said.

Bennett said she could not believe the level of support for the store, and was now confident Basement Discs would remain open.

“We have been gobsmacked; completely, completely overwhelmed, humbled beyond belief,” she said. “It’s not even the donations, it’s the beautiful messages that people have put directly on the site that have just made such an incredible psychological difference to us to make us realise we do need to keep going, people do actually care about what we do.”