Home » World News » Why Australia sends its waste overseas, and what we should do about it

Why Australia sends its waste overseas, and what we should do about it

Jakarta: Misna sits in a mountain of rubbish in her village of Ploso, East Java, holding a ripped and faded Australian $20 note.

Known as a trash picker, Misna has been picking through other people's garbage for twenty years. She started soon after a paper recycling company, Pakerin, opened its doors. Now most of the village of about 1000 people makes their living by either working in the factory or sorting through the waste discarded by the company. 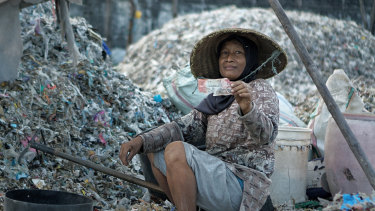 Misna, a trash picker from Ploso village in East Java, holding an Australian $20 note she found among the rubbish from the local paper company.Credit:Amilia Rosa

The garbage comes from all over the world: "Britain, America, Australia, Singapore, many other countries," she says. "I know from the cash that we find. I found a $20 Australian note just this week, but it was too damaged, so I can't sell it".

Misna's village is covered in rubbish, but she doesn't want Indonesia to stop importing plastic and paper from overseas – because she doesn't know how else she would make a living.

"They can't do that, they shouldn't. What will happen to us, hundreds, thousands of us? They just can't." 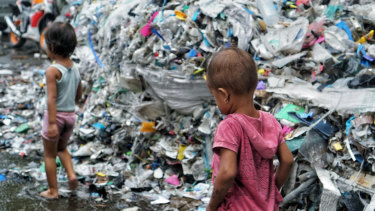 Children in Bangun village in East Java play in their rubbish-filled yard. Some of this is from Australia.Credit:Amilia Rosa

But China's decision in 2017 to stop accepting rubbish turned the global supply chain upside down. It meant new destinations had to be found for recyclable waste produced by richer nations. Much of it has found its way to poorer nations in south-east Asia, including Malaysia, Indonesia, the Philippines, Thailand and Vietnam.

Malaysia is preparing to ship some 3000 tonnes back to Australia and a host of other countries, including the US, UK and Canada.

The Philippines and Indonesia are planning to do the same thing. The Philippines is so annoyed with Canada it recalled its Ambassador in May, while Thailand and Vietnam have also sharply cracked down on plastic waste imports.

The Sydney Morning Herald and The Age travelled to the Indonesian port city of Batam, earlier this week, to speak to customs officials who have impounded 65 containers of plastic waste, including one from Australia that the officials have classified as toxic.

Much of the waste in the container was ordinary household items, but it was mingled in the poorly sorted bales with more hazardous items such as engine oil containers and silicon sealant.

All of this is happening in a country that already struggles to manage its own domestically-produced waste. The country's rivers and canals are horrendously polluted, the streets are often full of rubbish and a vast proportion of the country's plastic waste end up in the world's oceans – it is the world's second biggest contributor globally to plastic in the ocean. Ironically, though, the failure to instal systems to collect and sort their own waste might partly explain why recycling factories need to import plastic and paper from overseas. 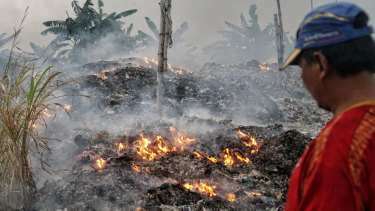 A man watches over the burning of paper company waste because he can’t sell it to tofu or cracker factories.Credit:Amilia Rosa

In Surabaya, Indonesia's second largest city, plastic recycling is big business. Now, eight Australian containers that were supposed to have only paper in them, but which also contained mixed plastics, have been impounded at the city's port. It looks likely that these containers will be sent back too.

Next Tuesday, the Indonesian ministries of Finance and the Environment are due to hold a press conference about the Surabaya containers, and on the issue of the plastic waste more broadly.

Tougher rules are expected to be announced. Indonesia's Coordinating Minister for Maritime Affairs Luhut Binsar Pandjaitan said on Tuesday of imports: "The bottom line is, we don't want it … Why [should we accept it]? … We were lied to."

But it appears unlikely that the importing of plastic for recycling will be banned, as losing access to the tradeable commodity would put pressure on Indonesian businesses. 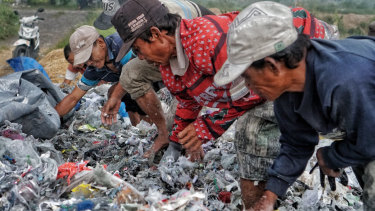 Sahat Panggabean, a senior official in the country's Environment department, says the government wants to tighten supervision of the materials being imported, but not ban it.

"There will be no shut down [of the industry], it isn’t like that. The philosophy behind doing recycling is not to import trash but to use domestic trash. However, business said that the domestic supply is short so we opened channels for the importing of raw [plastic] materials," he said.

"People in the field must really check that the manifest matches the stuff inside the containers … With regards to imported waste, we are exploring ideas on how to make business people be more responsible. Basically it’s about business ethics."

Meanwhile, in the village of Ploso, near Surabaya, many locals make their living from sorting through the imported plastic waste that piles up around them and is brought in along with paper for recycling. 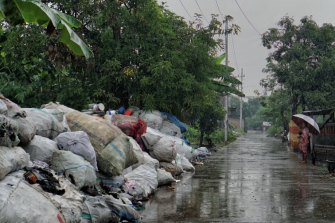 Giman, the head of Ploso village, agreed that locals were very nervous that he government would shut down the importing of plastic and paper waste, given recent media coverage.

"What will happen to us, and to the company's workers, if they stop the containers?" he asked. "I was able to send three of my sons to university. Two now have masters degrees."

Incredibly, the plastic waste being sorted is even burned in fires to cook tofu, because it's a cheaper alternative to firewood.

"Every bit of waste from the companies is worth something. To other people it's trash, for us it is a treasure. The paper bits we sell to make egg trays. The big plastic chunks, we separate them and sell them. The smaller bits, too small to separate, we can sell it to tofu, sausage, and cracker factories to be used as an alternative for firewood. Every bit has its value," Giman said.

Deakin University's Trevor Thornton, an expert in hazardous materials management, says Australians are "pretty good at recycling, both businesses and households. What we are not great at is not putting contaminants in those streams".

The global recycling market has, in recent years, seen big changes to what is now acceptable.

"We need the Australian government and private enterprise to improve sorting capacity within Australia. The technology exists, we just just need more of it. We also need households to reduce the level of contamination," he said.

In Australia, waste management is under the purview of state governments, rather than the federal government, but it's hard to escape the conclusion that federal intervention might be required to introduce nationally consistent policy settings.

Most industry players agree that what's needed is more recycling in Australia and less waste sent to countries not equipped to deal with it.