Why Britain’s electric dream is driving so many of us to distraction: As Tesla owners are forced to queue for hours to charge their cars, one disillusioned motorist who’s just faced a nightmare Christmas journey reveals how

Every year, on the weekend before Christmas we drive to Bromsgrove in Worcestershire, and take my mother-in-law out for a slap-up festive lunch. She’s 86 now and doesn’t get out much.

It’s about 120 miles from our bit of North London up to Bromsgrove, but it’s mostly motorway and, before we bought our electric Nissan Leaf, the journey took a couple of hours.

The Nissan has a supposed range of 160 miles but, at 70 mph, it’s more like 100 miles, and in cold weather, when you have the electricity-sapping heater on, even less than that.

Which meant the spectre that haunts every electric car driver — range anxiety — was at the front of our minds before we set off. 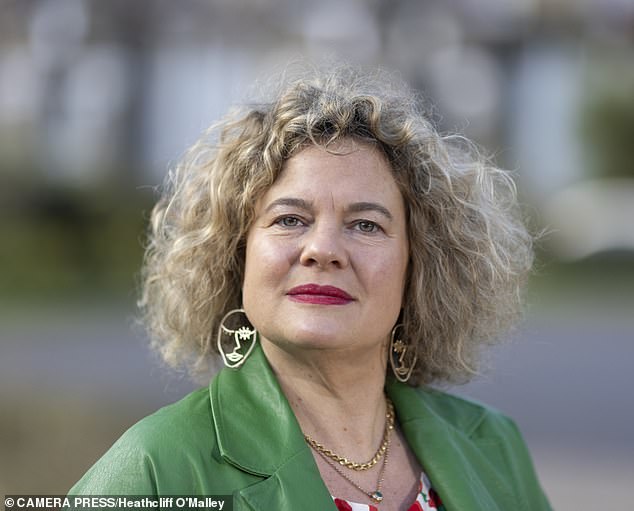 Every year, on the weekend before Christmas we drive to Bromsgrove in Worcestershire, and take my mother-in-law out for a slap-up festive lunch. Pictured: Eleanor Mills

The day of our trip to see Grandma was below zero and we had to put the heater on, but even with a charging stop factored in, the journey should take three hours. So I set off at 9am with my husband and teenage daughter, decked out in Christmas sparkles, loaded with treats and looking forward to lunch.

We planned to charge at Oxford services, about 50 miles away. But when we arrived, one of the two electric chargers was broken and three cars were queueing for the one that was still working. Fortunately for us, the three cars waiting needed to use a different type of socket to the Nissan, but though the Chademo plug we needed was free, two of the other cars were blocking access to it.

This kind of situation will sound horribly familiar to the dozens of Tesla drivers photographed this week waiting for up to three hours in Hertfordshire, Cumbria and Westmorland because of the sheer number of cars on the roads due to hopeless trains.

Even though there is a large network of highly efficient Tesla Superchargers in the UK, when you have too many electric cars and not enough chargers, the result is complete chaos — and lots of drivers caught between frustration at having to wait for ages, and fear that if they press on with their journey they’ll run out of power on a lonely motorway. 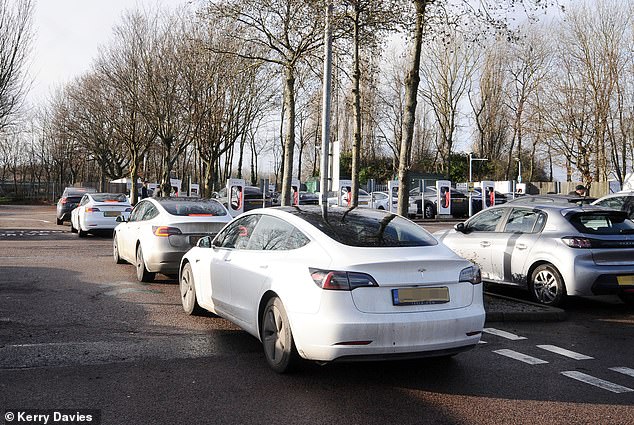 We planned to charge at Oxford services, about 50 miles away. But when we arrived, one of the two electric chargers was broken and three cars were queueing for the one that was still working. Pictured: Packed out charging bays

I didn’t dare carry on without charging at Oxford and, happily, one of the waiting drivers agreed to move so I could charge up. But having gone inside to have a coffee, when I checked on the car I found the charge had stopped.

This, it transpired, was thanks to a new driver plugging into the other half of the charger and somehow cutting me off. Cue more angst and a gathering sense of trouble ahead. After 45 minutes, we were off. We finally got to Grandma’s, took her to lunch and then dropped her home. At which point we realised the charge was so low because of the cold that we’d need to power up before we left.

We’ve got pretty clever at searching Google Maps for local chargers and found one in a nearby Asda. So we plugged in the Nissan, dug in at Grandma’s and ate chocolates while we waited.

By the time we hit the road, it was beginning to snow and the weather warnings were alarming. It was too cold not to have the heating on, so we knew we’d have to stop at Oxford to charge once more. This time there were six cars all trying to charge from the one pump (the others still hadn’t been fixed).

One woman was tearful. She told us her car was nearly out of electricity. She’d driven from Birmingham to Marlow that morning in her Jaguar to see her elderly father, and had been to Beaconsfield services, where neither of the two chargers were working. Her car was supposed to have a range of 300 miles, but it was about half that because of the cold. 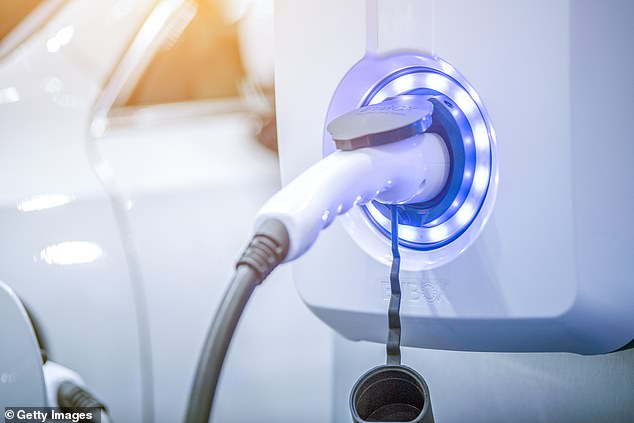 Even though there is a large network of highly efficient Tesla Superchargers in the UK, when you have too many electric cars and not enough chargers, the result is complete chaos

She was terrified of running out of charge on the motorway, alone with her two-year-old.

This time we had to wait an hour before we could even start to charge, by which time it was 6pm — nine hours after we’d first set off from home. Worcestershire and back is always a long day, but this was ridiculous.

Then it got worse. The only working charger broke down. We called the emergency number. Eventually it was answered. After 20 minutes, they got it back in service. By this time about ten cars were waiting, unable to go any further.

I turned to comfort the weeping lady, to find a manic grin spreading across her face. ‘This is it for me. This car’s going back tomorrow,’ she said. ‘I’m getting a hybrid. I’m never doing this again.’

It was another two hours before we finally set off. A journey home which should have taken two hours had taken five-and-a-half.

I write this more in sorrow than in anger, because when I first got my whizzy eco-car two years ago, it felt like the future: fast, quiet and smooth, it’s like driving a spaceship. And back then it was cheap (£7 to charge overnight, now it’s £15 — and more like £30 on a rapid charger).

The irony is that we early electric car adopters did what politicians told us we should be doing in a bid to save the planet, promising that we would reap handsome economic rewards, too. Yet now we’re paying a heavy price, both in stress and in financial terms.

Back then, we got £3,000 off the asking price, due to a subsidy that was abolished by the Government this summer: we pay no vehicle tax (which EV drivers will have to pay from 2025), and no London congestion charge (it can only be a matter of time before Mayor Sadiq Khan comes for us). EV drivers whose cars are worth more than £40,000 when bought new — which is many of them — will also have to pay an annual lump sum of hundreds of pounds a year in tax from 2025.

Now, most of the economic advantages have gone and the charging situation is a joke. Even in London, which alone has more chargers than most of the rest of the country put together, it’s not easy. In the North of England and rural counties like Norfolk, it can feel like a charging desert. That’s pretty scary if you are driving somewhere remote.

The Government boasts that there are around 35,000 public electric chargers in the UK, but many of those are feeble, and can take up to 24 hours to fully charge a car. Only 6,400 of those 35,000 are what are known as ‘rapid chargers’, the kind you find in service stations, which charge a typical electric car in about an hour.

Crucially, those 35,000 chargers have to service 420,000 pure electric cars on the road today. Though many owners will have home chargers, as my trip to Worcestershire proved, you will sometimes have to rely on charging on the move, and that’s when the infrastructure can prove disastrous.

There are rare beacons of what the electric future might be like: outside Swansea and Exeter there are service stations with 12 rapid chargers for cars like mine — but it should be like that everywhere.

The electric dream is becoming a nightmare because of high demand for the chargers and poor maintenance of them. Now it feels a cash-strapped government has lost the drive and will to provide much-needed support. If Tesla can build so many chargers, why can’t UK plc? Parliament has decreed that, by 2030, no more diesel or petrol cars can be sold, yet it admits there will be 190,000 fewer electric chargers than they promised by then.

Worse than that, many analysts fear that the National Grid will not be able to generate enough electricity to power the chargers they do install — and the way things are going all these new cars probably won’t be able to rely solely on wind or solar energy.

Personally, I’ll give it a year and, if it’s still this bad, I’ll be borrowing a petrol car to go and see Grandma.