Will Sturgeon call a wildcat referendum? SNP chief lays out separatist plans TODAY despite warnings she has NO legal grounds for a ballot without PM’s permission

Nicola Sturgeon today dramatically ramps up her rhetoric on Scottish independence with threats to hold a wildcat referendum.

In a statement to Holyrood, the SNP leader is expected to lay out her plans to stage another ballot in October next year, with or without permission from Westminster.

But Ms Sturgeon has been warned unless Boris Johnson grants so-called ‘Section 30’ powers – something he has flatly refused to do – any vote would be illegal.

Critics have accused the First Minister of pursuing her ‘obsession’ with breaking up the UK rather than tackling the cost-of-living crisis.

The last referendum in 2014 was branded ‘once in a generation’ by both sides – and resulted in a 55-54 margin for keeping the union.

Polls have been showing that there is little appetite for another contest, with a steady – if slim – majority against independence.

But Ms Sturgeon will again argue today that the SNP’s victory in Holyrood elections gives her a mandate to re-run the ballot. 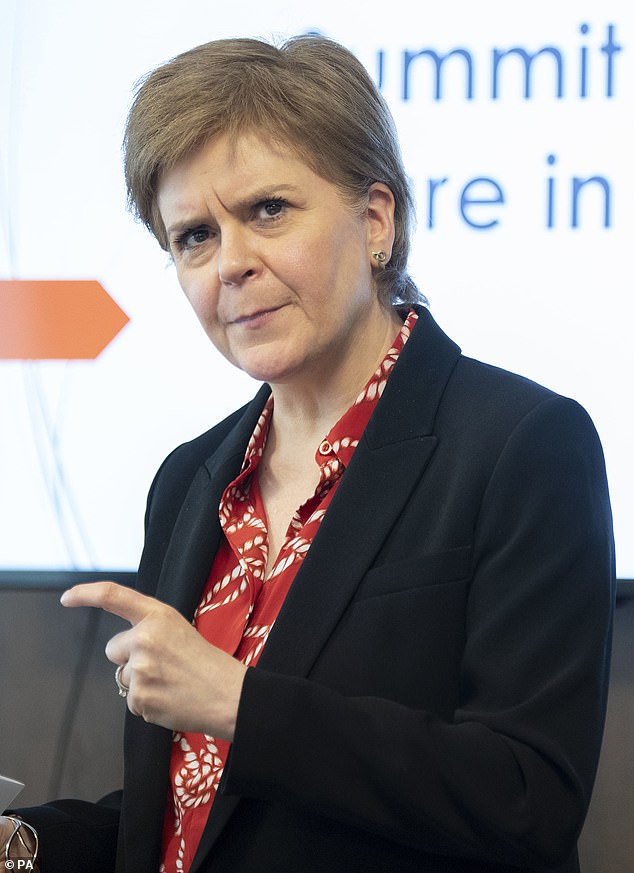 In a statement to Holyrood today, Nicola Sturgeon is expected to lay out her plans to stage another independence referendum in October next year, with or without permission from Westminster 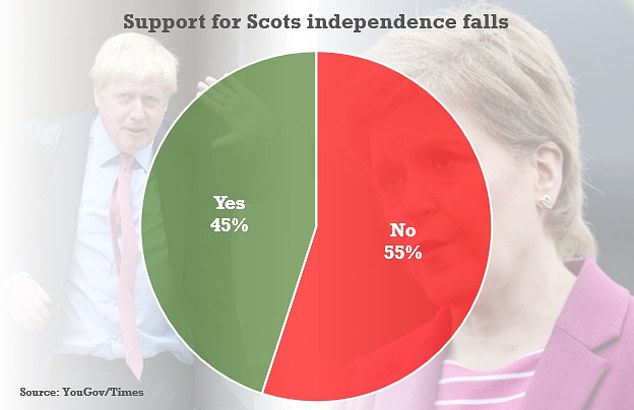 The YouGov research for The Times last month – which ignored ‘don’t knows’ – suggested that backing for the union has increased since March, when 53 per cent wanted to stay together

Ahead of her statement today, Ms Sturgeon said the ‘democratic will must be respected’.

She went on: ‘Bluntly, the UK Government is in no position to lecture any other country about the need to respect democratic norms if it is intent on trying to thwart democracy at home.

‘And because we live in a democracy where election results still matter, continued efforts to thwart the will of the people must – and will – fail.

‘The UK is either a partnership of consent or it is not a partnership worthy of the name. Westminster rule over Scotland cannot be based on anything other than a consented, voluntary partnership.’

However, ministers have insisted that ‘once in a generation’ means there should be no referendum for 25 years.

Earlier this month Ms Sturgeon published the first of a series of position papers designed to woo the Scottish public.

But she was forced to concede that ‘regulatory and customs’ problems would arise at the border with England if Scotland joined the EU single market as she hopes.

The admission raises the prospect of Northern Ireland-style wrangling with Brussels over checks on goods.

But Ms Sturgeon insisted the obstacles could be overcome, and access to the EU market mattered more to Scotland.

The White Paper, titled Wealthier, Happier, Fairer: Why Not Scotland? compares Scotland and the UK with other European nations and set out why the SNP/Greens think the country would be better off if it were independent.

But it did not address key issues such as what currency Scotland would use, its financial state given the vast deficit, pensions, benefits, defence policy and plans to rejoin the EU. Ms Sturgeon has hinted that future documents will cover those topics.

Scottish Conservative constitution spokesman Donald Cameron said: ‘The First Minister’s obsessive push for another divisive independence referendum is the height of self indulgence and irresponsibility.

‘In the last week before summer recess, people want to see the SNP Government focus on the issues that really matter to them, rather than wasting time and energy on a pretend poll.

‘Right now, ministers should be prioritising the global cost-of- living crisis, fixing our NHS and rebuilding our economy from the pandemic. It is disgraceful Nicola Sturgeon would put all that on the backburner to push for another unwanted – possibly even illegal – referendum.’ 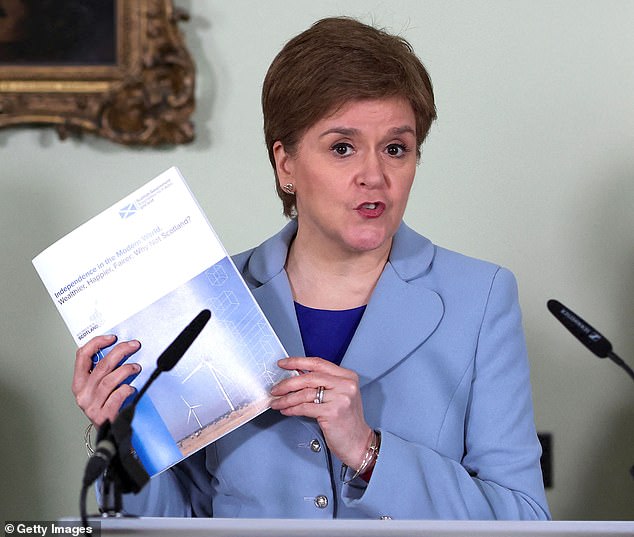 Scottish Labour leader Anas Sarwar accused the First Minister to ‘trying to drag Scotland back to the politics of the past instead of dealing with the challenges of the present’.

He said Ms Sturgeon was forging ahead with an unwanted referendum and ignoring people’s desperate cries for help with the cost-of-living crisis’.

Mr Sarwar said: ‘Right now people across Scotland are struggling to put food on the table as bills spiral; one in eight Scots is stuck on a waiting list as our NHS buckles under pressure, and public transport is in chaos.

‘Instead of dealing with these issues, we have two governments feeding off one another and trying to tear communities apart for political gain.’

Lib Dem leader Alex Cole-Hamilton described the attempt to break up the UK as ‘out of touch, obsessive and desperate’.

He added: ‘Nicola Sturgeon is neglecting everyone who is worried about paying the bills or the sharp spike in Covid infections.

‘It’s a kick in the teeth for health staff, the hundreds of thousands of people on NHS waiting lists and anyone who believed the First Minister when she said education was the top priority.