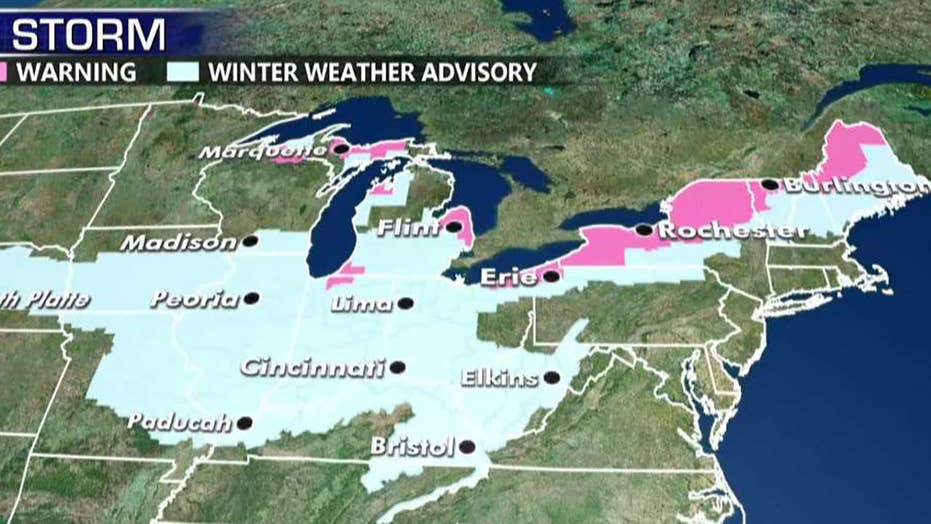 Janice Dean has your FoxCast.

An Arctic invasion is underway, and tens of millions are in its path.

A quick-moving storm system creating icy conditions that caused a plane to slide off the runway at Chicago's O'Hare International Airport is pushing east, bringing snow, freezing rain and gusty winds to the eastern two-thirds of the country — even as a surging cold front brings record-breaking temperatures.

"We do have the potential for some snow in the forecast tonight and into tomorrow as this Arctic cold front moves in," Fox News Senior Meteorologist Janice Dean said on "Fox & Friends." "We're going to see record-setting cold as well as winter weather advisories for over 60 million folks."

Winter weather advisories have been issued stretching from the Plains to the Midwest, Ohio Valley and into the Northeast. 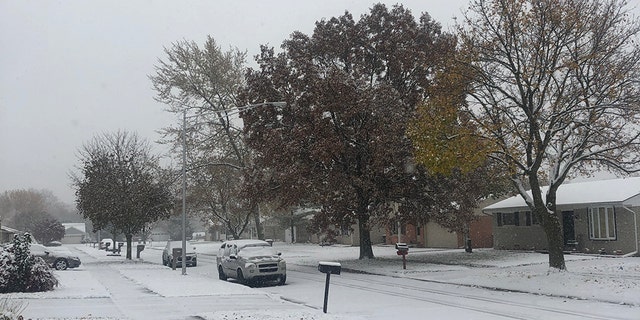 Snow was accumulating in Taylor, Mich. on Monday morning as an arctic front was bringing wintry conditions to the Midwest.
(Lauren Smith)

The National Weather Service's Weather Prediction Center said the arctic intrusion is going to bring heavy snow with the potential for freezing rain for a "wide swath" of New York. 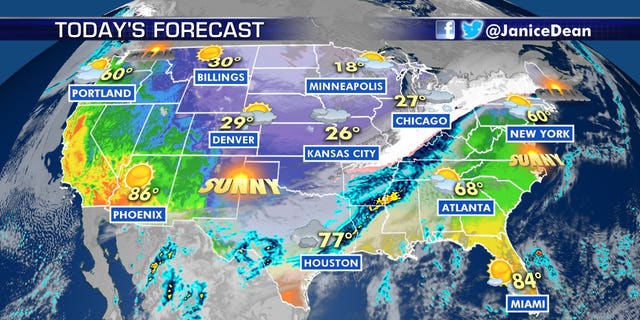 The snow was falling from the Plains and into the Midwest on Monday morning, with between two to five inches expected to accumulate in the Chicago area. Driving conditions were already described as "treacherous" with spinouts reported.

Airlines at Chicago's O'Hare and Midway Airports have canceled hundreds of flights as the snow arrived in the region and created tricky travel conditions. A plane slid off the runway shortly after landing around 8 a.m. at O'Hare International Airport, according to officials. Video from a passenger shows the aircraft turn to the left before sliding off the runway as passengers on board react.

An American Airlines spokesperson told Fox News that American Eagle flight 4125, operated by Envoy Air, slid off the runway after landing from Greensboro, N.C. due to "icy conditions."

"No injuries were reported," the spokesperson said. "All 38 passengers and three crew members were removed from the aircraft and are now safely back in the terminal."

An O'Hare spokesperson told Fox News the incident is having a "moderate impact" in overall flight operations at the airport. 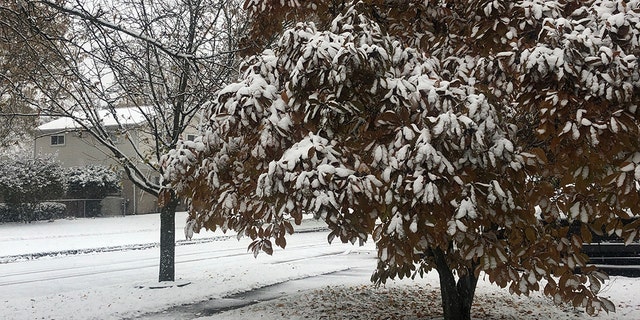 Snow falls in Taylor, Mich. from a winter storm on Monday.
(Lauren Smith)

As the storm system moves east, between six to 12 inches of snow with locally higher amounts are forecast for northern upstate New York and northern Vermont by Wednesday morning. Snow accumulations of up to a foot are also expected stretching into Maine along the Canadian border. 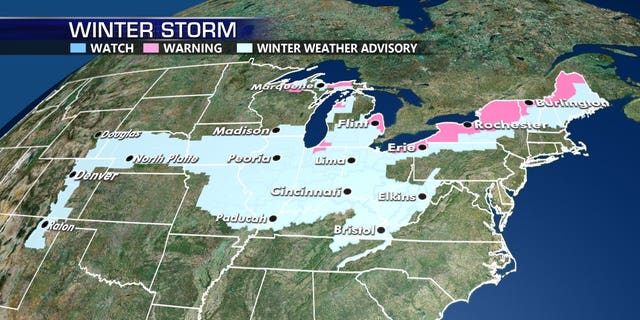 Winter weather advisories stretching from the Plains into the Northeast, impacting up to 60 million people.
(Fox News)

"Measurable snow, especially across interior sections of the northeast and some of that will, possibly, get into the coastal areas tomorrow behind the cold front," Dean said. "We're going to see plenty of snow in some of those areas, our first measurable snow of the season."

As the cold air enters the Northeast and Mid-Atlantic on Tuesday, some areas could see rain changing to snow as the arctic front passes off the coast. The bitter cold is also expected to trigger lake effect snow that could total more than a foot in parts of New York. 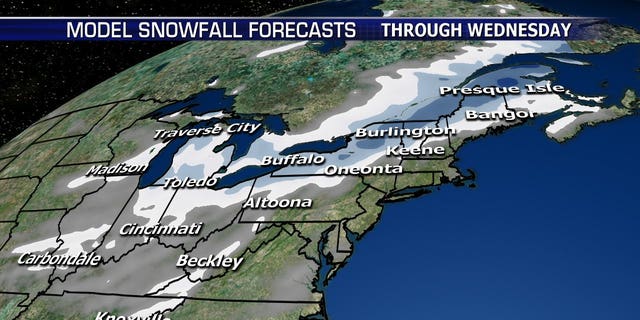 Several inches of snow are forecast to fall from the Plains into the Northeast.
(Fox News)

Behind the strong Arctic front, widespread cold temperatures that will likely set record low temperatures across many locations from the Plains eastward to the East Coast and down into the Deep South will be set in place by Wednesday.

"In fact, below freezing temperatures are forecast as far south as the central Texas coast by Wednesday morning," the WPC said. "This will make it feel like in the middle of winter rather than in November for much of the eastern two-thirds of the country for the next few days." 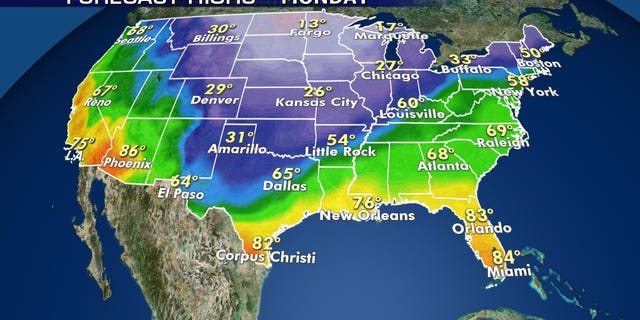 Bitter cold temperatures into the Northern Plains on Monday will move into the East and South by later this week.

Cities in the Midwest such as Chicago will only see a high of 20 degrees on Tuesday, while places such as New York City will barely climb above the freezing mark on Wednesday.

Conditions are expected to moderate and dry out by later in the week and into the weekend, according to forecasters.

Fox News' Matt Finn in Chicago contributed to this report.