Workers who tried to tow away Porsche 'could face disciplinary action'

Council workers who tried to tow away a Porsche over an unpaid parking ticket ‘could face disciplinary action’ after they ate sandwiches and drank tea with the owner who blockaded the road.

The £30,000 car had been parked on double yellow lines and received a ticket shortly before the officers came and tried to take the vehicle.

But Peter and Anne ran out to form a human shield on either side of the truck to stop it driving off. 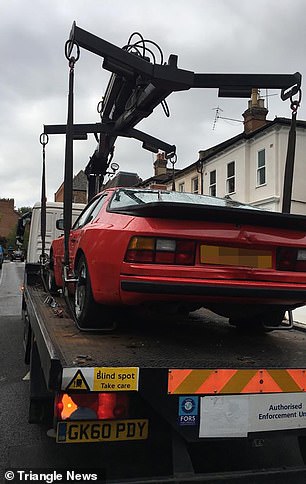 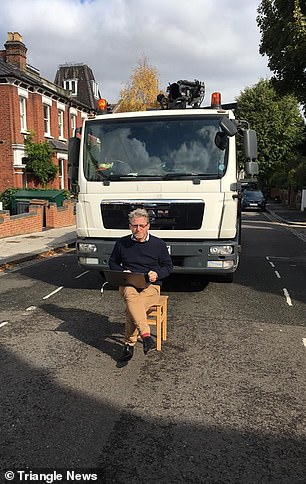 Haringey Council sent a tow truck to take Peter Fennell’s Porsche, pictured left, but the 52-year-old sat on a stool with his laptop, right, on the middle of the road in Highgate in protest

Peter, 52, who is an architect, sat on a stool in front of the tow truck with his laptop and kept working.

The stand-off lasted for about four hours, after which the Fennells were told they could keep their car.

The tow-truck then broke down and Peter helped jack-start its engine. 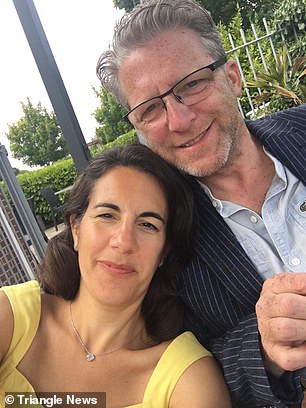 Peter and his wife Anne, both pictured, ran out to form a human shield to stop the truck

While the truck was broken down, Peter and Anne, 44, shared cups of tea and sandwiches with the officers in the middle of the road.

But at least one of the officers was allegedly threatened with disciplinary action after getting too friendly with the couple, it is understood.

Peter says one of the officers later told him he was ‘hauled in’ for a ticking off from his bosses for what had happened, which he thinks is ‘outrageous’.

However, he didn’t want to comment further for fear it would make things ‘ugly’ for the officers at work.

He did say of the officers: ‘All the people involved were jolly decent people just doing their jobs.’

The tow-truck is managed and operated by NSL Services, an outsourced firm employed by Haringey Council. 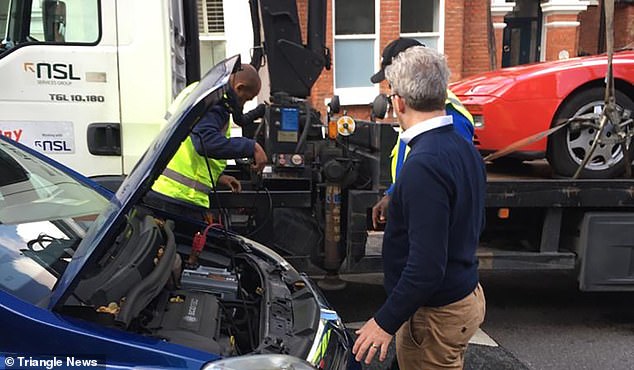 Porsche 944 owner Mr Fennell pictured using his wife’s car to jumpstart the loader after it broke down, during which time the couple shared tea and sandwiches with the workers

A Haringey Council spokesman said: ‘We expect high standards from our staff and are looking into this incident.

‘It’s important that we ensure that people are parking responsibly to ensure the safety of our residents.

‘A fine was issued.’

MailOnline has reached out to NSL Services for comment.