What do you buy to mark the 70th birthday of an autocrat who has it all?

How about a life-size model of said leader, complete with a micro-penis?

That’s exactly what the people of Prague did for Vladimir Putin to mark the day that he reached the milestone age.

A large group marched the sculpture, showing the birthday boy in his birthday suit on a golden toilet, through the city’s streets. 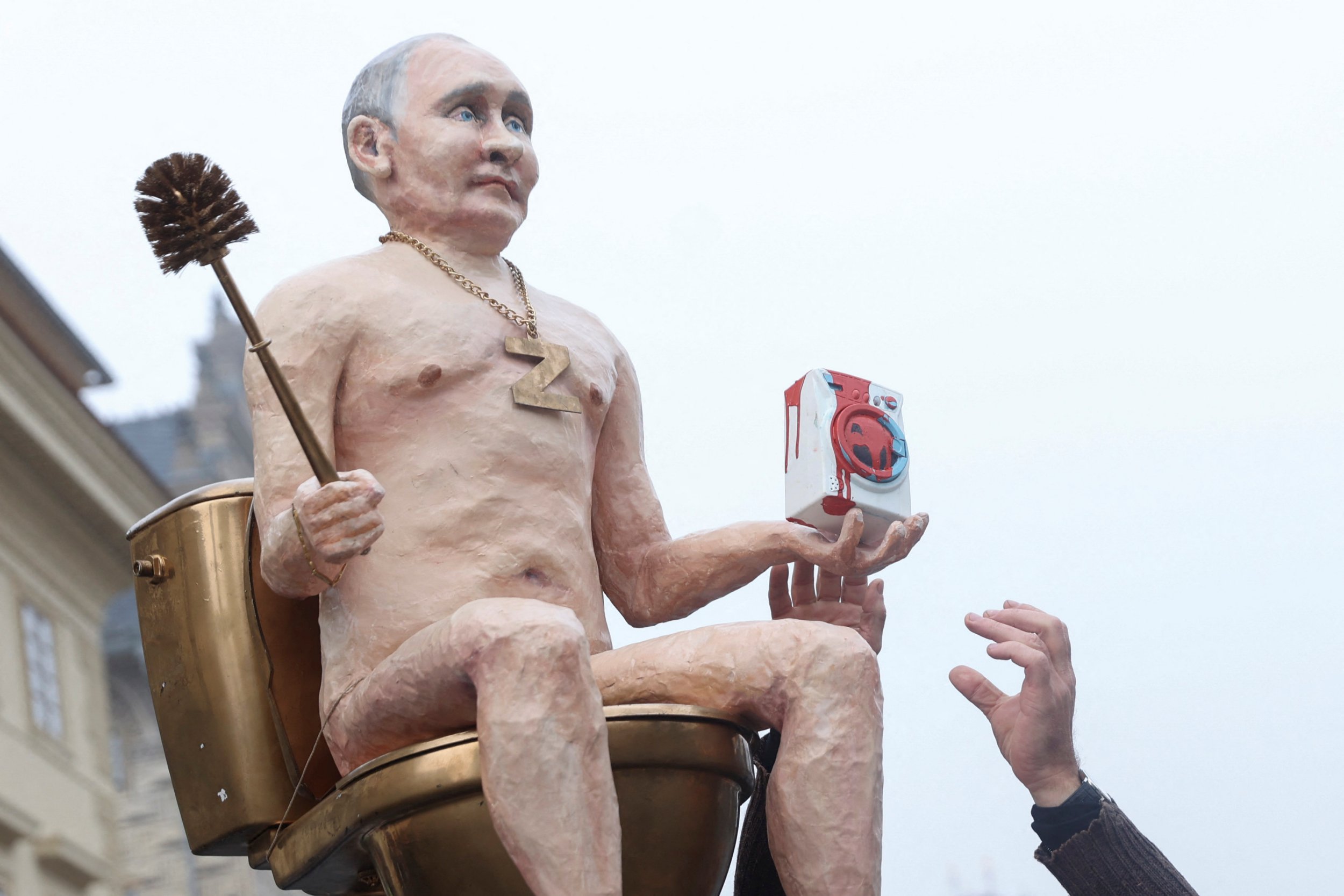 It just so happens that the city is hosting leaders from more than 40 countries who have some gift ideas of their own.

Referring to rumours that Putin has fled to a secret bunker with his family, Lithuania’s defence minister Arvydas Anusauskas tweeted: ‘Today Putin on the occasion of his birthday was given a new table and binoculars for communicating with visitors. Lithuanian people are raising money for some “fireworks”.’

We think it was a joke, but who knows?

Meanwhile, Ukraine’s minister Olekseii Reznikov decided to mark the occasion by bestowing the title of ‘coward’ upon his nemesis.

He said: ‘Our President [Volodymyr Zelensky] is with his army [visiting the front], and where is yours?

‘You know that in Ukraine you are not liberating anyone.

‘You are destroying entire cities where recently you were considered good neighbours – and spoke Russian.

‘And now enmity has been sown for generations to come. How will you go down in history?’

Putin has received one supportive birthday message from a world leader, however.

Kim congratulated him for ‘crushing the challenges and threats of the United States’, the latest sign of deepening ties between the two pariah states.

Despite a fluctuating friendship between the nations over the years, North Korea is reaping clear benefits from Moscow’s need for allies.

In Russia itself, grand events have been held across the country to mark Putin’s 70th birthday.

Large groups have taken to the streets with Russian flags. According to state media, a group of students even organised a flash mob in honour of the occasion.

For many, Putin has leader is all they’ve ever known. The 70-year-old has been serving as the president of the country since 2012, having previously served between 2000 and 2008.

The 70-year-old was born Vladimir Vladimirovich Putin was born on October 7, 1952 in St Petersburg.

He worked for the KGB – the main security agency for the Soviet Union – for 16 year, attaining the rank of lieutenant colonel before launching his political career in 1991 in his home city of St Petersburg.

He was appointed director of the FSB, the successor to the KGB, in 1998, by Boris Yeltsin, before first becoming the President of Russia in 2000.