Toddler cut free by firefighters after getting head stuck in potty

That’s potty! Toddler is cut free by firefighters after getting her head stuck in toilet training seat

A two-year-old toddler had to be rescued by firefighters after getting her head wedged in the seat of her potty.

Harper Stewart, from Wallsend, North Tyneside, was being potty trained when she put her head through the narrow hole and accidentally got the seat trapped around her neck.

Mother-of-six Kay Stewart, 37, frantically attempted to remove it off her daughter – even using washing-up liquid – but to no avail.

Crews from Tyne and Wear Fire and Rescue Service (TWFRS) had to use a hacksaw to cut the seat off her head. Harper’s mother described how the blade was very close to her face. She added: ‘I held her while they sawed very carefully through the seat, which they managed to do safely by protecting her neck with a towel.

Recalling the rescue mission, the toddler’s mother said: ‘I was potty training Harper and had turned away for a second when I heard cries of ‘Mammy I’m stuck!’ coming from the bathroom.

‘I rushed in and found Harper standing in the bathroom with the potty seat around her neck.

‘I called Shannon for help and we both tried to get it off but nothing was working. Harper was really upset so Shannon called the emergency services.

‘They turned up with their blue lights going and the kids loved it, the firefighters were so calming and kept the other kids busy whilst helping Harper.

‘It was brilliant to see how quick they helped us get it off and Harper gave the firefighter a big hug to say thank you.

‘They even put their lights on and gave them a big wave before heading off. 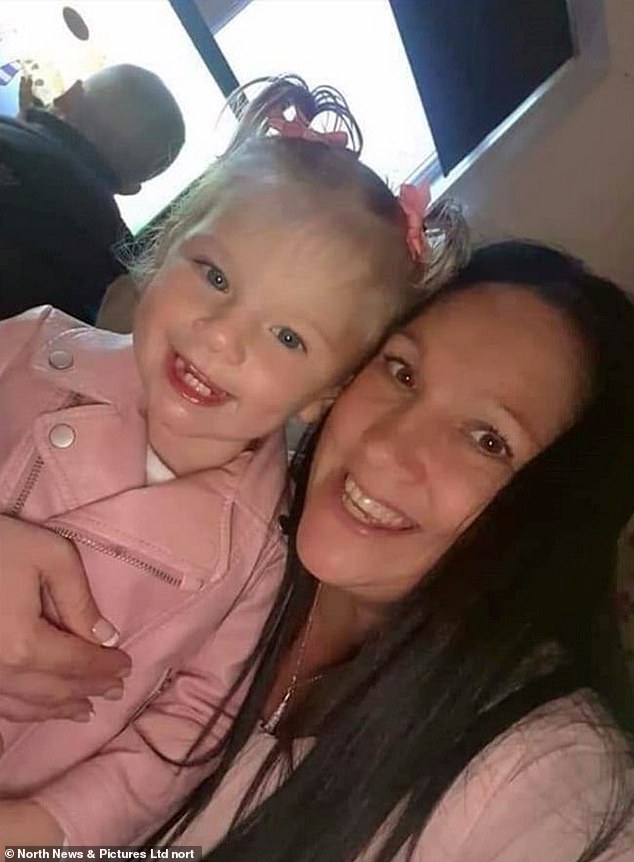 Harper’s mother Kay, 37, frantically attempted to get the potty off of her neck, even using washing-up liquid, but to no avail 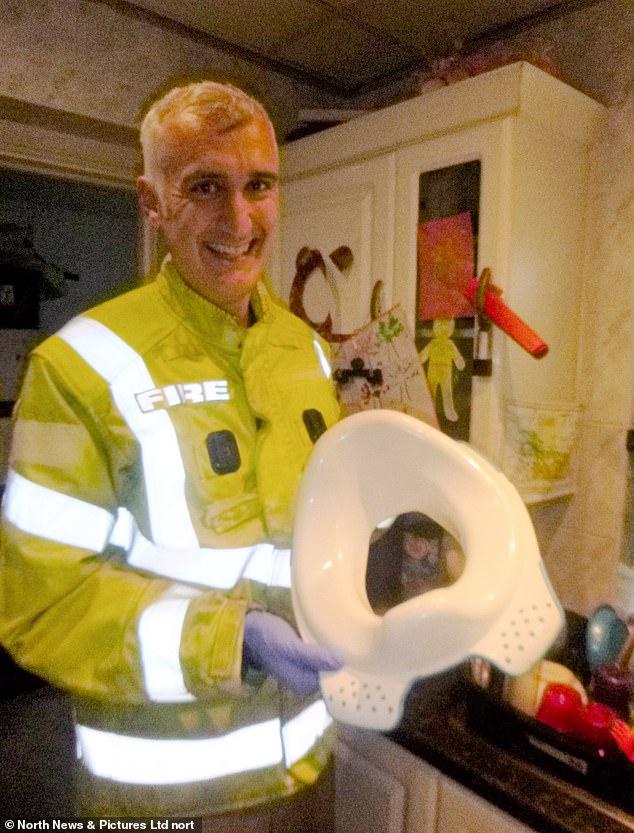 ‘I was so grateful for their help that evening.’

Station manager Trevor Sturrock said: ‘Green Watch were with Kay and her family in just a matter of minutes, and used small tools to remove the toilet seat from Harper’s head.

‘Something that she had to be very still for and can be really frightening for such a little person.

‘Harper was a super star and was very brave which helped the firefighters complete the rescue.

‘I want to thank the crew for their professionalism at this incident, sometimes when you turn up people are really panicked and it’s about remaining calm and calming others.

‘I’m so glad the crew were able to support and assist Kay and her family and we hope Harper doesn’t find herself stuck again and wish her well with the potty training.

‘No two days are the same in this job and we really do have to be prepared for anything.’