Making use of social media, the ‘Meet the Parents’ actor points out that ‘everyone has the right to seek safety’ after visiting Ukrainian refugees at the Polish border.

AceShowbiz –Ben Stiller has visited Ukrainian refugees at the Polish border. Having travelled to eastern Europe as part of his work with the United Nations High Commissioner for Refugees, the 56-year-old star has now shared his experience on social media.

“Just arrived in Poland, ahead of #WorldRefugeeDay with @Refugees to meet people who’s lives have been impacted by the war in #Ukraine,” the actor wrote on Twitter. “At the Medyka border in Poland I met families who fled the war in Ukraine, leaving loved ones behind, with no idea when they will be able to return home.” 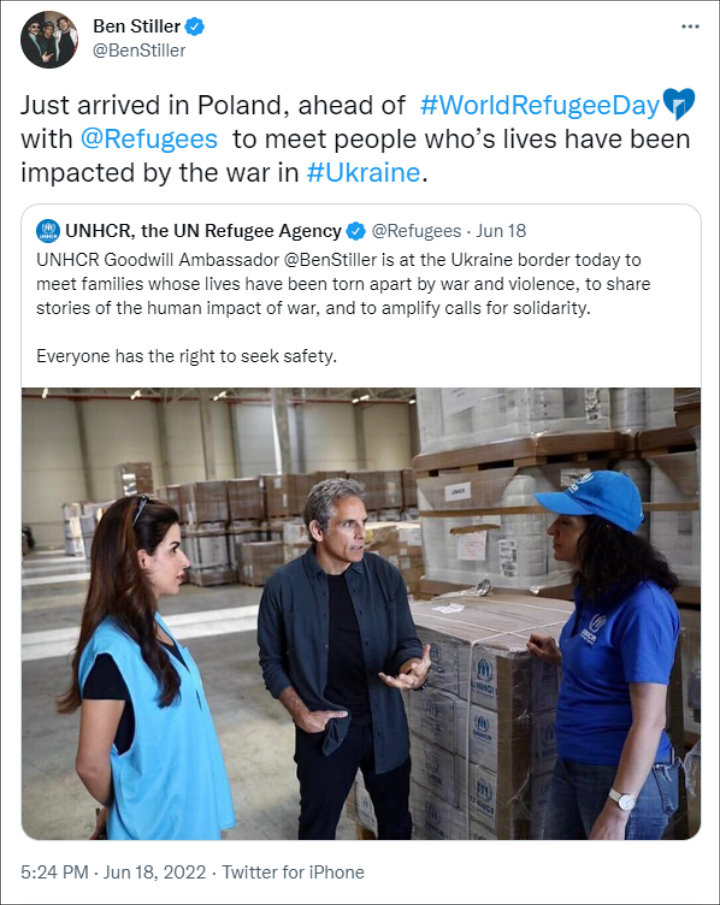 Ben Stiller shared a photo after arriving in Poland.

The “Meet the Parents” star went on to say, “I’m so impressed w/ @refugees representatives and how committed they are to supporting people on their journeys. #WithRefugees.”

Ben also spoke about his trip to Poland on Instagram, noting that millions of people “have been forced to flee their homes” since the start of the war with Russia. He added, “I’m here to learn, to share stories that illustrate the human impact of war and to amplify calls for solidarity.”

Ben ended his social media post with a powerful message about the refugee crisis. He said, “Everyone has the right to seek safety. Whoever, wherever, whenever.”

In early 2022, fellow Hollywood star Sean Penn confessed to being startled by what he witnessed on the border between Poland and Ukraine. The Oscar-winning actor, who was filming a documentary about the Russian invasion, shared, “We had the luxury of being able to abandon a rented vehicle on the side of the road.”

“This was a startling thing to me; it was mostly women and children, some in groups and some just a mother and her child, in almost all of those cars,” he added. “In some cases, the father was dropping them off and returning, because we know that from 18 to 60, men are not to leave, they’re to stay in the resistance against Russia.”