Publicist for the ‘Breaking Bad’ star offers gratitude to cast, crew and producers who have stayed by his side, while his son assures that the actor is going to be fine.

The actor was admitted to the hospital after collapsing on Tuesday, July 27. News on his condition was not forthcoming for almost 24 hours, but now his publicist has updated friends and fans.

“We can confirm Bob is in stable condition after experiencing a heart related incident,” a statement reads. “He and his family would like to express gratitude for the incredible doctors and nurses looking after him, as well as his cast, crew and producers who have stayed by his side.”

“The Odenkirks would also like to thank everyone for the outpouring of well wishes and ask for their privacy at this time as Bob works on his recovery.” 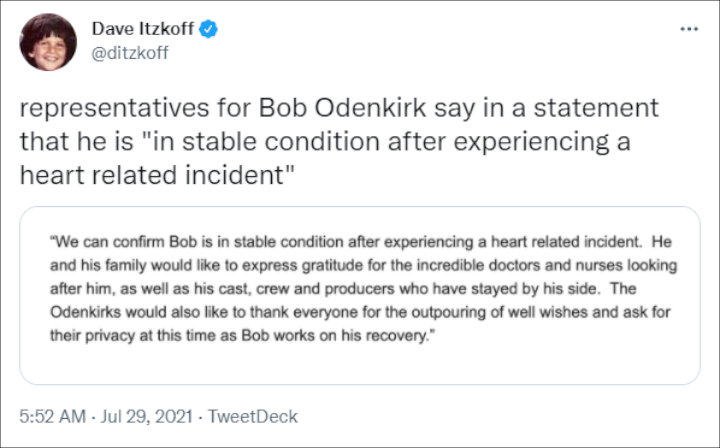 Meanwhile, Bob’s son, Nate Odenkirk, has assured fans his dad will be just fine. “He’s going to be OK,” he tweeted on Wednesday evening, July 28.

Fellow castmate Aaron Paul, meanwhile, simply wrote in his post, “I love you my friend.” Actor David Cross has also shared positive message over Bob’s recovery. “I will share what I know when I can but Bob is one of the strongest people I know both physically and spiritually. He WILL get through this,” he wrote.