Home » Celebrities » Dick Van Dyke, 96, reflects on his marriage to Arlene Silver, 50: ‘We share an attitude’

Dick Van Dyke, 96, reflects on his marriage to Arlene Silver, 50: ‘We share an attitude’ 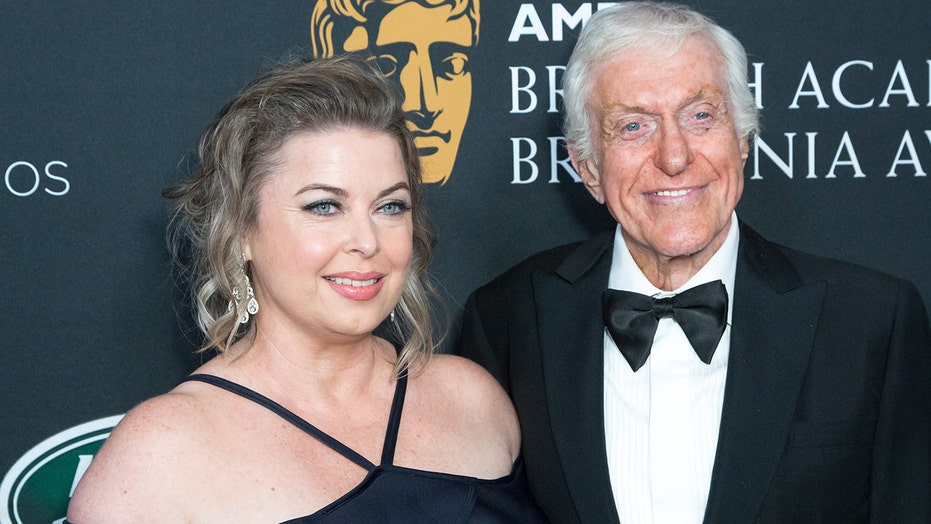 It was 2007 when the actor attended the Screen Actors Guild Awards to present his former co-star Julie Andrews with a Lifetime Achievement Award. That evening he started chatting with the makeup artist as she powdered his nose.

“He said, ‘Hi, I’m Dick,’” Silver recently recalled to Closer Weekly. “The first thing I asked him was, ‘Weren’t you in ‘Mary Poppins?’ We got along immediately as friends, so it didn’t feel like he was so much older than me.”

According to the outlet, the 96-year-old previously had two long relationships that lasted over 30 years. As a romance blossomed between the pair, Van Dyke was worried that the public would object to their age gap. 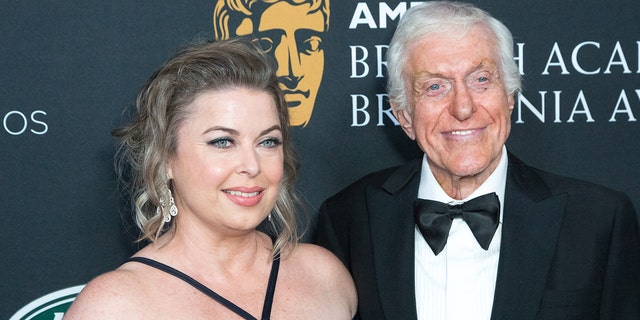 “I thought there would be an outcry about a gold digger marrying an old man,” he admitted. “But no one ever took that attitude.”

“We share an attitude,” he told the outlet about their relationship. “She can go with the flow. She loves to sing and dance, which we do almost every day. She’s just delightful.” 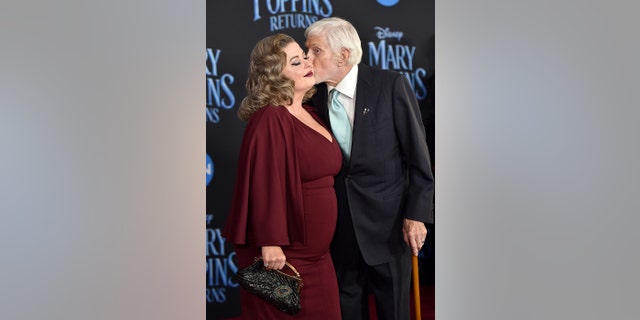 “He is the most perfect human being,” she said. “I’ve never met anyone so happy, so genuine, so amazing. He’s just like a happy pill.”

Dyke was married to Margie Willett, the mother of his four children, from 1948 until 1984. He was also in a relationship for over 30 years with actress Michelle Triola. The relationship lasted until her death in 2009 at age 75.

Today, Van Dyke is still singing and dancing. His secret to longevity is to “keep moving.” 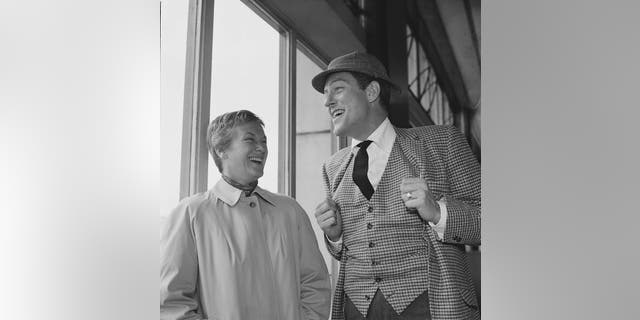 “I’ve been one of those lucky people that got to do something for a living that he would have done for nothing,” he said at the time. “That’s why I’m still here… They can’t get me off the stage.”

The star credited his stamina to “good genes and not getting hit by a bus.”

“I’ve always been an exerciser and still am,” the actor told the outlet. “I go to the gym three days a week, get in the pool and exercise. At my age, they say to keep moving. Put me on solid ground and I’ll start tapping.”

Van Dyke shared he does water aerobics, lifts weights and walks on a treadmill. 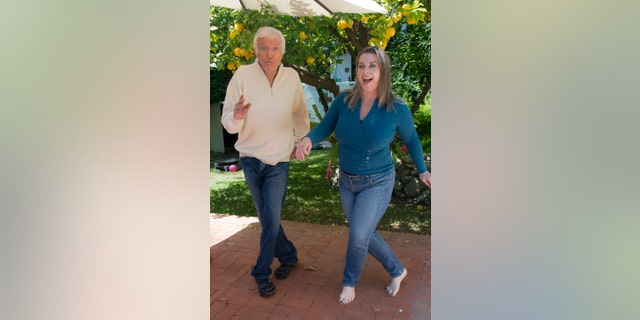 Back in 2015, Van Dyke published a book titled “Keep Moving and Other Tips and Truths About Aging,” where he candidly shared his advice about enjoying old age.

“Keep moving is the main thing,” Van Dyke told NPR at the time. “I think I reiterate three or four times in the book, ‘Do not start going down the stairs sideways.’ It feels good on your knees but it throws the hips out and the back starts to go out, the next thing you know, you’ve fallen down and broken your hip. So even if it hurts a little, go down the stars front-ways.”

“It’s more in my nature to be optimistic, I think,” he continued. “I’m one of those people who get up on the right side of the bed in the morning. I get up and have a cup of coffee and go to the gym because I talk myself out of it because I will as anybody will.”

Van Dyke also pointed out that his love of performing has kept him feeling young for decades. And one doesn’t have to be an entertainer to get in on the fun. 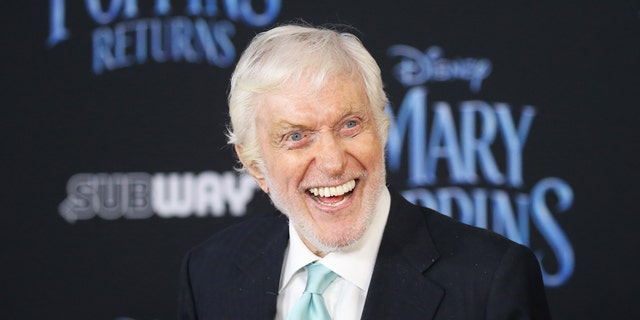 “Everybody should dance,” he explained. “And everybody should sing. People say, ‘Well, I can’t sing.’ Everybody can sing. That you do it badly is no reason not to sing. I have a beautiful, young wife who sings and dances, so there’s a lot of duetting going on at my house.”

Still, Van Dyke admitted he does have regrets — but he doesn’t let the past prevent him from enjoying his life today.

“Well, I would not have smoked or drunk anything,” said Van Dyke on what he would have done differently. “I think that set me back. There are times that I feel like apologizing to my body for the way I treated it… I have arthritis and all those things, but I keep moving… I didn’t discover dancing and singing until I was in my 30s. It just happened out of nowhere. I regret that I didn’t train a little or take some vocal coaching or something. But I just enjoyed what I had and had fun with it. If I had to go back, I’d train.”

Van Dyke told the outlet that his wife keeps him on his toes. 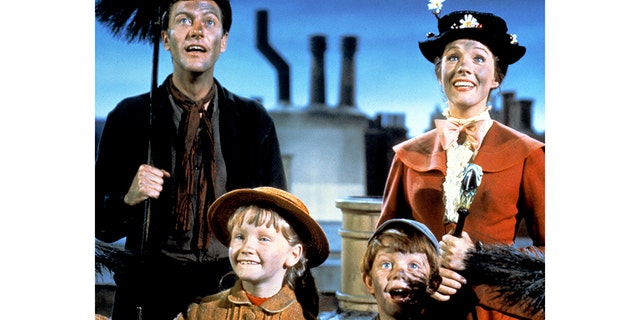 “I sometimes forget that we’re doing a great experiment here — 46 years difference,” said Van Dyke. “And we work at it to some extent. There’s got to be some understanding, find out what old habits don’t work anymore. It takes some adjusting and fitting in but that’s part of the fun of it.”

However, accepting the idea of getting older isn’t as simple as breaking a sweat at the gym or sharing a duet with Silver. Van Dyke did tell the outlet that there are some difficult aspects of getting old that he cannot ignore.

“Giving up the things that you enjoy doing,” he admitted. “I can’t handle the tennis court anymore. I can still run and dance and sing… [But] the point is to enjoy. You have to pick what you enjoy doing, what fulfills you, what interests you. And I realize that’s not possible for a lot of people. As Thoreau said, a lot of people are living lives of quiet desperation. But almost anyone can find that one immersing hobby or pastime that they love to do… and someone.”