Home » Celebrities » Even Tomi Lahren Is Against Alabama’s Abortion Law!

Even Tomi Lahren Is Against Alabama’s Abortion Law!

Tomi Lahren comes out as an unlikely critic of Alabama’s controversial abortion law.

On Wednesday, Governor Kay Ivey signed into law a bill that could punish doctors — who perform abortions — with life in prison.The law only allows exceptions “to avoid a serious health risk to the unborn child’s mother,” for ectopic pregnancy, and if the “unborn child has a lethal anomaly.”

On Thursday, the Fox News star shocked the Internet when she said the near-total abortion ban could force “women into more dangerous methods,” and that it is “too restrictive.”

“I will be attacked by fellow conservatives for saying this but so be it, this Alabama abortion ban is too restrictive. It doesn’t save life, it simply forces women into more dangerous methods, other states or countries. You don’t encourage life via blanket government mandate!”

As predicted, she was attacked by fellow conservatives, including one who accused her of being “anti-Christian, anti-family, and anti-freedom.”

However, the 26-year-old clapped by writing:

“If you think banning abortion with no exception for rape or incest will stop women from terminating pregnancy, you’re not being honest with yourself. P.S. you’re not God so don’t you dare evaluate my Christian faith based on your moral superiority complex.” 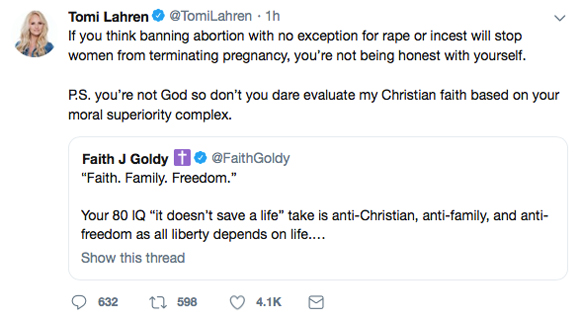 Of course, Lahren’s views on abortion shouldn’t come as a surprise.

Back in March 2017, the commentator was suspended from The Blaze after she went on The View and came out as pro-choice.

After signing the bill, Governor Ivey said in a statement:

“Today, I signed into law the Alabama Human Life Protection Act, a bill that was approved by overwhelming majorities in both chambers of the Legislature… To the bill’s many supporters, this legislation stands as a powerful testament to Alabamians’ deeply held belief that every life is precious and that every life is a sacred gift from God.”

While she noted that the bill may be unenforceable due to the Supreme Court’s Roe v. Wade decision that legalized abortion in all 50 states, Ivey said the new law is designed to challenge that decision.

“No matter one’s personal view on abortion, we can all recognize that, at least for the short term, this bill may similarly be unenforceable… As citizens of this great country, we must always respect the authority of the U.S. Supreme Court even when we disagree with their decisions. Many Americans, myself included, disagreed when Roe v. Wade was handed down in 1973. The sponsors of this bill believe that it is time, once again, for the U.S. Supreme Court to revisit this important matter, and they believe this act may bring about the best opportunity for this to occur.”

The law is the strictest abortion ban in the country.