Janet Hubert called out white actresses who ‘commit crimes’ — including Lori Loughlin — amid criticism of the ‘Full House’ star’s prison sentence length for her role in the college admissions scandal.

Janet Hubert, who played the original Aunt Viv on the Fresh Prince of Bel-Air, shared her thoughts on white actresses who “commit crimes” yet go on to live successful lives. This critique was inspired by Lori Loughlin, 56, who was released from prison after a two-month sentence for her involvement in the U.S. college admissions scandal on Dec. 28. Lori had reported to the FCI Dublin in California on Oct. 30, meaning she actually served just two days shy of two months.

“So when white actresses commit crimes they get new shows, pilots, etc. Lori Loughlin …I assume, will get an Emmy for her time in prison,” Janet tweeted a day after Lori became a free woman. She added, “Hmmmm…oh to be white, blond, and privileged! No thanks I would rather be bold, black, and dignified! #onlyinamerikkka” To top off the tweet, Janet used an old GIF of herself as Aunt Viv.

Janet wasn’t the only person upset to see the consequences Lori has faced in the justice system, which many fans believed was too lenient compared to what other incarcerated people have faced. “Lori Loughlin. Pleads guilty to federal crimes. Less than 2 months in prison. Kalief Browder. Falsely accused of stealing a backpack. Couldn’t post bail. Spent 3 yrs at Riker’s awaiting trial. Dies by suicide after release. Justice looks different when you’re poor and Black,” Kristen Clarke, president of the Lawyers’ Committee for Civil Rights Under Law, tweeted on Dec. 28. 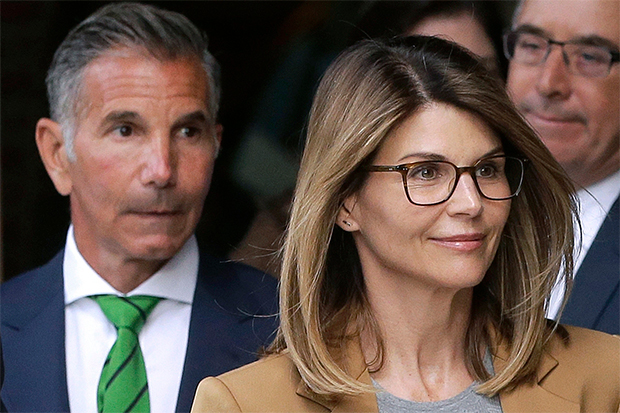 Many more Twitter users made comparisons between Lori and Black people who served much longer sentences, recalling the cases of Derek Harris, Tanya McDowell and more. Another celebrity who pleaded guilty in the college admissions scandal was Felicity Huffman, who spent 11 days in prison and returned home in time to spend Thanksgiving with her family in 2019 (she was given a 14-day sentence).

Lori and her husband Mossimo Giannulli, 57, had paid $500,000 in bribes so that their daughters Olivia Jade, 21, and Isabella Rose, 22, could be admitted into USC as crew recruits. Like her mom, Olivia was also called out for her white privilege by the hosts of The View after the YouTube star broke her silence on her parents’ scandal on the Dec. 8 episode of Red Table Talk. During the interview, Red Table Talk co-host Adrienne Banfield-Norris made a similar point as Janet, saying that Olivia being on the talk show is “the epitome of white privilege.” Olivia admitted that it was “embarrassing” she had not fully realized her “insane privilege” before.

Lori’s husband is still serving time in prison, and isn’t expected to be released until April 17, 2021. Lori, who pleaded guilty to one count of conspiracy to commit wire and mail fraud, still has to complete 100 community service hours and is currently on two years of supervised release. The actress has also paid a $150,000 fine.