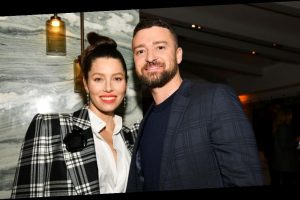 Justin Timberlake has confirmed he and wife Jessica Biel have welcomed their second child together.

The SexyBack singer, 39, shared the happy news that he and Jessica, 38, have welcomed a baby boy together on the Ellen DeGeneres Show.

Speaking via video link on the show, which is set to air on Monday, he said: “He's awesome and so cute. Nobody's sleeping.

Justin revealed they have chosen the name Phineas for their baby son.

The couple also have their son, Silas, together, whom they welcomed in April 2015 after getting married in 2012.

Justin explained they kept the pregnancy a “secret” from everyone except close family and friends, Ellen, 62, revealed she was one of the few who knew about it.’

Ellen told Justin: “I think we were FaceTiming and you said, ‘Hey, you want to know a secret?’ and then Jessica walked in and you put your hand on her stomach. You were like, ‘I’m having another baby!’”

TV host Ellen then asked what it was like being a dad of two children now.

He joked of him and his The Sinner actress wife Jessica: “We don't see each other anymore.

“It's a lot of fun. I guess the saying goes go from a zone defence to a man-to-man really quickly. It's great. Silas is super excited.”

He added: “Right now he's very much liking it.

“Phin can't walk yet or chase him down, so we'll see what happens.”

Justin also opened up on his son Silas, and shared his interests.

When quizzed by Ellen if Silas is showing any early signs of being a musician, he said: “But he's into Legos and tennis. We got him a Nintendo Switch. It's just like, child crack.”

But, Justin did share hopes that he and his son will play gold together someday.

New dad-of-two Justin said: “He likes golf, but I'm not pressing it.

“I want him to like it if he likes it. He's fast and active so he's very good at tennis.”

It comes after it was reported that Justin and Jessica had secretly welcomed a baby boy together in July last year.

According to the Daily Mail, Jessica's mother Kimberly Conroe Biel, 65, had been spending time with her daughter and newest grandchild at the time.

A friend of the couple reportedly told the publication that Kimberley will be staying with the family at their Colorado home until Sunday and claimed The Sinner actress gave birth to a little boy.

Jessica hinted at how much life had changed after becoming a mother of two in September as she shared a throwback photo of herself and Justin at the Emmy awards.

She wrote in the caption: “Once upon a time, a long LONG time ago… Mom and Dad put on some real clothes and stayed out past midnight.”