Seems like Keanu Reeves had an eventful weekend — and not just because his latest film, John Wick: Chapter 3 – Parabellum, opened as the No. 1 film in the country.

The 54-year-old actor reunited with ex-girlfriend China Chow at 2019 benefit of The Geffen Contemporary at MOCA (Museum of Contemporary Art) on Saturday, May 18, where they were spotted engaging in playful banter.

The daughter of restaurateur Michael Chow (of the famed Mr Chow Chinese restaurant chain) and late model/designer Tina Chow, was caught “hitting on Keanu hardcore,” according to an eyewitness. “She had her arm on his shoulder and they were totally flirting. He was tossing his head back and laughing. At one point, he got so animated that he power walked away from her and then playfully came back.”

One person who also clearly witnessed the exchange between the former pair: China’s boyfriend, Billy Idol.

Although the “White Wedding” crooner, 63, arrived with the London native, “Keanu was standing next to her and Billy and chatting for a long time, but China kept touching [Keanu] and was letting her arm linger on his shoulder,” says the insider. Even after Idol walked away, “they kept flirting.”

“Keanu had a childlike grin on his face and was laughing hysterically at everything she said,” the source adds.

China posted a video of one of her lighthearted interactions with her former flame on her Instagram Stories on Sunday, May 19. “This one is for you Tina [Craig] @bagsnob,” she captioned the footage of the Matrix star. She followed up with a screenshot of the pair chatting with Craig. 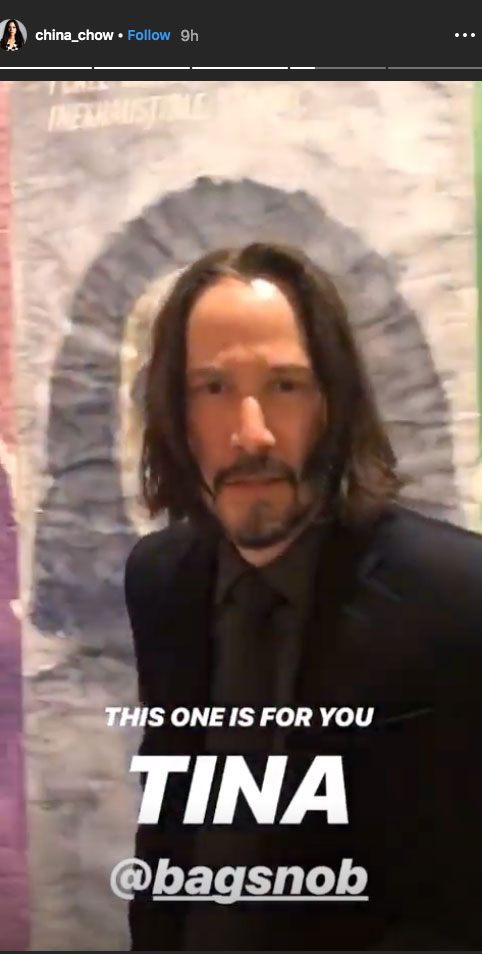 Reeves and China were first linked in June 2008 after they were spotted topless in the Mediterranean Sea together while on vacation in the French Riviera.

Nearly a decade later, starting in April 2018, China began appearing alongside the “Dancing With Myself” crooner at various high-society events.

The Ode to Happiness author, for his part, recently acknowledged his past feelings for Speed costar Sandra Bullock.

“She obviously didn’t know I had a crush on her,” Reeves told Ellen DeGeneres on the Friday, May 17, episode of The Ellen DeGeneres Show. (The Academy Award winner, 54, previously admitted she used to have a crush on Reeves in a December interview with the talk show host.)

The Bill & Ted star suggested the likely reason their mutual feelings never came up was because they “were working.”