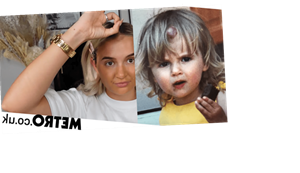 Molly-Mae Hague has shared some previously unseen photos from her childhood, showing the large strawberry birthmark she had removed while also opening up about her parents’ divorce.

The Love Island star posted a Q&A on her YouTube channel on Thursday where she shared recollections of difficult moments from her childhood.

While applying her make-up, Molly-Mae revealed: ‘I actually was born with a very very large strawberry birthmark. Essentially it looked like this [beauty blender]. It was bright red, it was super large, it stuck out of my head quite far. It’s quite shocking, I didn’t realise.’

Molly-Mae was around 12 or 13 years old when she decided to remove the birthmark before starting secondary school as her parents feared she would be bullied but ‘luckily [she] never was’.

‘I just wasn’t confident about it and as I got older, the colour kind of faded but birthmarks are cool,’ she shared before encouraging fans: ‘Own them, rock them. The only reason I got mine removed was because it was so in a prominent area right on my head.’

The 21-year-old then revealed what it was like going through her parents’ divorce when she was around 15 and coming from a ‘split household’.

‘It’s quite a hard age to go through something like that because I was fully aware as to what was going on,’ Molly-Mae admitted.

She went on to explain: ‘If I’m completely honest with you, growing up my biggest fear in life was that my parents would get a divorce and I feel like that’s a lot of young people’s biggest fears when you’re growing up. You get so scared that your parents are going to get divorced. I don’t know what it is about it, it’s just like the thought of your parents breaking up used to petrify me.

‘I used to have nightmares about it. My parents used to argue a lot and I used to think, “they can argue as much as they want as long as they don’t get a divorce. That’s all I care about”, but really, my parents getting divorced was the best thing that ever happened in a weird way.’

Molly-Mae advised that parents ‘have to do what’s best for them’ despite the weight of getting divorced.

‘I think my parents were together for like 25 years. That’s such a long time. All I’ll say is just support both parents, try not to take sides and that’s something that I really tried to do,’ she said.

‘Even though the circumstances around my parents’ divorce were horrible, you can’t take sides. You can’t hold grudges.

‘I’ve not spoken about it in years to be honest and I feel like a lot of people in films and stuff use it as a reason to be a nasty person like, “my parents got a divorce, leave me alone”. It’s not that deep – it is to some people but to me it was hard. Yeah it was a horrible time in my life but, pick yourself up.’

Offering support, Molly-Mae concluded: ‘If you’re going through that then I’m sending love to you because that’s how you feel.’

As for her own relationship, the reality star has been dating boxer Tommy Fury since 2019 after meeting on Love Island.

They currently live together in Manchester and have plans to get married and start a family in the not too distant future.