If there’s one thing you probably didn’t expect to see today, it’s likely to be Rihanna at a south London barbershop.

But, that’s exactly where the Fenty Beauty founder appeared on Friday night after putting in an appearance at Wireless Festival to cheer on her boyfriend A$AP Rocky.

The pair welcomed their first baby boy together in May and have kept a relatively low profile since starting a family, so it was super exciting to see them out and about in the capital.

Shocking residents in Crystal Palace, the couple were swarmed by fans as rapper A$AP got a haircut – casual.

Videos circulated on social media show hundreds of screaming fans outside the shop, but the singer – dressed in sunglasses and a dark top – seemed to see the funny side of it as she filmed the reaction from within.

Other videos showed the rapper getting a trim while the Wild Thoughts singer watched in the background. 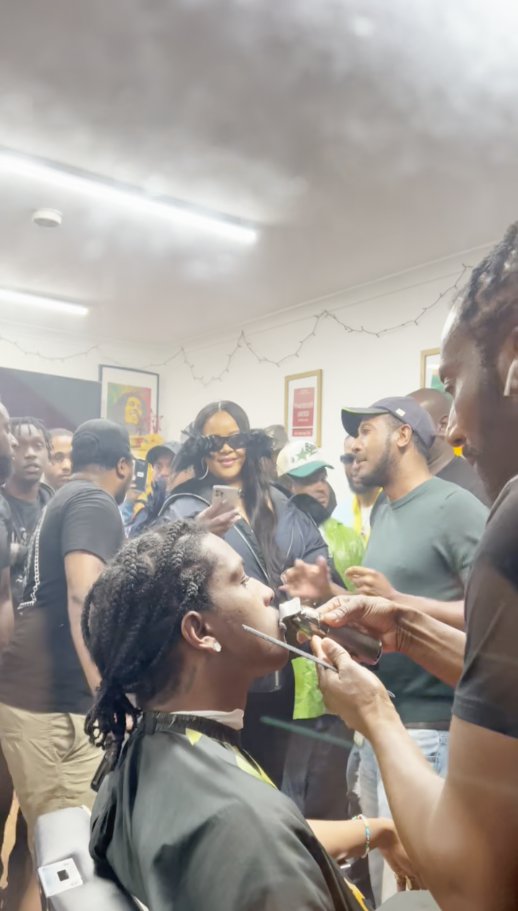 One bystander said the pair had been driving up Anerley Hill when the rapper – real name Rakim Mayers – stopped the car to enter the shop where music was playing.

‘Everyone saw A$AP come out first and then probably like 30 seconds later he went back to the car to bring out Rihanna,’ he said.

‘Then everyone noticed and it went hectic.’

Their first public appearance since welcoming their little one comes after A$AP wowed concert goers during the headline slot at the Wireless, which is taking place in Crystal Palace park from July 1 to July 3.

His performance marks his return to English soil for the first time in six years.

The new dad recently offered an insight into the things that he was hoping to pass on to his children, explaining that he hoped to raise an ‘open-minded’ family.

‘I will always remind my children to never lose their imagination, even as adults, no matter what,’ he told Dazed and Confused.

‘I hope to raise open-minded children. Not people who discriminate. And I’m not trying to describe a saint, but realistically, I just want a cool child with cool parents.

‘Things like diversity and versatility are important, and they’ll be embedded in the household.’

Chris Brown and Lil Uzi Vert were among the names also hitting the Wireless stage on Friday, with J Cole, Playboi Carti, Tyler, The Creator, Little Simz and Ari Lennox set to perform across the weekend.