Sunday Burquest — a former contestant on “Survivor” — has died after battling cancer.

The youth pastor’s daughter, Kennedy, confirmed her mother’s passing on Instagram … posting a touching tribute that thanked Sunday for teaching her to be a Christian, and for being the best role model possible. 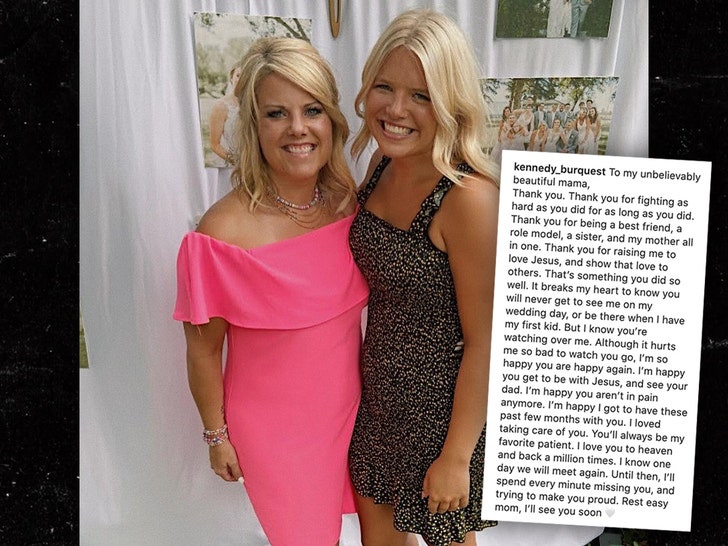 She writes … “It breaks my heart to know you will never get to see me on my wedding day, or be there when I have my first kid. But I know you’re watching over me.” Kennedy went on to say that she’s happy her mom will be with Jesus, and that she doesn’t have to be in pain anymore, adding … “I know one day we will meet again. Until then, I’ll spend every minute missing you, and trying to make you proud. Rest easy mom, I’ll see you soon 🤍.”

Sunday had previously disclosed that she’d been diagnosed with esophageal and ovarian cancer — with a new iteration of the disease re-infecting her last summer … when, at the time, doctors had told her she only had months to live.

Prior to the latest diagnosis, she’d fought breast cancer in 2012 … and came out the other side after several surgeries and treatments.

Sunday competed on the 33rd season of “Survivor” … dubbed ‘Millennials vs. Gen X,’ which aired in 2016. She made it pretty far, as she was the 14th person voted out, coming in at 7th place. She ended up going from being on a tribe with people mostly her age to the other tribe, full of 20 and 30-somethings, with whom she didn’t appear to gel that well.

Before coming on to compete, she’d been cleared medically after beating her breast cancer — and was one of the feel-good stories of the season. She’s survived by her husband and four children.