Home » Celebrities » The ‘All But’ Coup

The ‘All But’ Coup 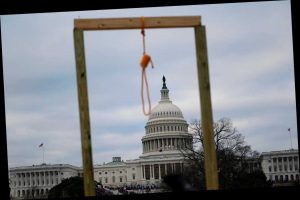 There is a stark divide between the way the public is talking about what happened at the U.S. Capitol last week and the way many media outlets are. Much of the public discourse, including on social media and in pop culture, isn’t confused about the attack on Congress: It’s seen as part of President Donald Trump’s haphazard but very real attempt to overturn the election and remain in power even though he lost.

In other words, an attempted coup.

It’s mostly established news outlets that have been reluctant to use this term (with some notable exceptions), fussing over this or that detail to argue “we can’t really say for sure” and falling back on problematic alternatives like “riot” or simply “insurrection,” which is accurate but falls short of the scope of events.

In a Twitter thread during Wednesday’s events, the Associated Press Stylebook, which sets the standard for many news outlets around the country, including HuffPost, narrowly seized on the motivations of the individual insurrectionists, not of their extremely powerful backer (emphasis added):

We may of course quote others alleging a coup or attempted coup, but so far AP has not seen conclusive evidence that the protesters’ specific aim was to take over the government, so at this stage we are avoiding the term in AP copy unless attributed.

It’s understandable that news editors, when suddenly faced with making sense of a chaotic event, stuck as closely as possible to the facts in front of them: A mob whipped up by the president stormed Congress. (Editor’s Note: Senior HuffPost editors on Jan. 6 also independently made the choice to use the terms “riot” and “insurrection” and specifically chose not to use the term “coup.”)

But over the next couple of days, the news sections of major outlets including The New York Times, USA Today and CNN had more or less settled on the shorthand “Capitol riot” or just “riot” ― a term that is already overburdened after a summer of misuse.

Both the Times and The Washington Post even ran columns explaining why the coup attempt was not, in the strictest sense, a coup attempt, if you stick to scholarly definitions offered by certain experts. These arguments begin to falter when one considers the military’s initial nonintervention ― “I don’t like the visual of the National Guard standing a police line with the Capitol in the background,” a senior Army officer reportedly told desperate officials who were begging for help ― and they focus heavily on the level of organization involved, ignoring the opportunism of Trump’s methods.

Regardless of definitions and academic hair-splitting, journalism has a role in helping the public understand what happened. Avoiding the word “coup,” at least in the authoritative editorial voice, has a way of underselling what historian Ruth Ben-Ghiat describes as a “shock event,” a method sometimes used by authoritarian leaders to “open up a window for exceptional action.”

Some of this hesitation to call it an attempted coup is doubtless rooted in U.S. exceptionalism and outdated comparisons to images of coups past. A coup “looks like” tanks, “looks like” seizing communications towers, “looks like” juntas and berets. And some of it is rooted in what might be called the Trump problem.

Trump has mastered the art of doing and saying things that clearly convey his intent without stating it outright, and there isn’t a media outlet in existence that hasn’t let him use this to his advantage. Everyone knows what he means, everyone knows what he’s doing, but standards departments can get hung up on the “state of mind” question: If he didn’t technically say it, can we really say he meant it? And conservative voices have gleefully exploited this dynamic, hammering every reputable outlet that dares to convey the clear meaning of Trump’s practiced mobspeak.

Trump is also improvisational. He mixes volatile elements together ― the time and place of his rally, the not-so-tacit invitation to armed far-right gangs ― says the inciting words, and waits to see what happens. To quibble with the fact that he didn’t say, “Attack Congress and forcibly stop Joe Biden’s certification as president” is to ignore what we all know about this man. His post-election campaign is even called “Stop the Steal.”

When he did speak out amid the violence, he first attacked Vice President Mike Pence, who had refused Trump’s demand to throw out the election in Congress and who had just been escorted to safety. Then, Trump practically winked at his supporters to remain in the Capitol.

“I am asking for everyone at the U.S. Capitol to remain peaceful,” he tweeted at 3:13 p.m., roughly half an hour after the crowd had breached the Senate chamber. “No violence! Remember, WE are the Party of Law & Order – respect the Law and our great men and women in Blue. Thank you!”

An hour later, he tweeted a video in which he limply called on the mob to “go home,” but also told them, “We love you, you’re very special” ― language he echoed later that evening, earning him a temporary suspension from Twitter.

As for the intent of the insurrectionists, the picture is becoming increasingly clear. While many were there to revel in the chaotic scene, some were organized, armed and ready to kill or capture members of Congress and the vice president. According to HuffPost’s own Igor Bobic, who was on the scene, the crowd was only a minute or two shy of entering the Senate chamber with senators still inside.

And what of the argument that the military did not get involved? As the mob overwhelmed the Capitol Police and lawmakers sheltered in place, the president’s recently installed Army secretary delayed the D.C. National Guard from intervening for hours. Maryland’s governor described a similar delay involving his state’s Guard — a negative exercise of military power, but an exercise nonetheless. It was the vice president and congressional leaders, who are not in the chain of command, who reportedly gave the orders to intervene against the president’s own gangs. (Trump claimed he himself called in the Guard, contrary to reports.) The military did in fact take sides during the attack on Congress ― first, apparently, against Congress, and later against its own commander in chief.

And, finally, we must ask what would have happened if these armed factions had succeeded in their task, “all but” directed by the president. Knowing what we know about Trump and his authoritarian impulses, the formal transfer of power almost certainly would have ended there. There likely would be no inauguration on Jan. 20, at least without a violent conflict between the president and Congress.

That is an attempted coup. And if warnings are to be believed, more is to come.