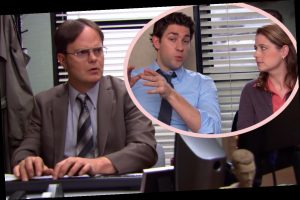 Man, Peacock is really showing off their stuff like some kind of… we can’t think of a proper animal metaphor.

But the streaming service owned by NBC Universal finally got their hands on the crown jewel of binge rewatching, The Office, on New Year’s Day, and because they have access to all the old unused footage, they used some right away to flex on Netflix.

The scene? A deleted, never-before-scene in which Jim (John Krasinski) and Pam (Jenna Fischer) prank Dwight (Rainn Wilson) into thinking he’s in… The Matrix.

Apparently the scene never made its way to DVD and has been lost since 2013. But not anymore… Does Peacock have more in store for hardcore fans? Exciting days…

Ch-ch-check out the HIGHlarious — and possibly last ever — new scene from The Office (below)!