What’s really going on between Meghan McCain and her soon-to-be former co-stars on “The View” since she announced on July 1 that she would be quitting the show? McCain dropped the bombshell during an on-air monologue, mere hours after Daily Mail first reported she was leaving and claimed her co-hosts were not made aware of her departure.

Speaking on the show, McCain explained her decision to leave was driven by her desire to spend more time in Washington, D.C. with her family instead of New York, where the show films. She also noted that she’d taken a lot of time to think about things, calling it “not an easy decision.”

A Page Six insider then claimed that McCain’s departure from the long-running daytime talk show was supposedly a long time coming. A source told the outlet that the outspoken star had supposedly “been wanting to get out” for a while before things became final and had apparently “been miserable since she started.” The star joined the show in 2017 and appeared on four seasons.

As fans will know, McCain has repeatedly butted heads with her co-stars – including current panelists, Sunny Hostin, Whoopi Goldberg, Joy Behar, and Sara Haines — over the years, and now the latter is revealing where McCain really stands with her co-stars after announcing her departure. 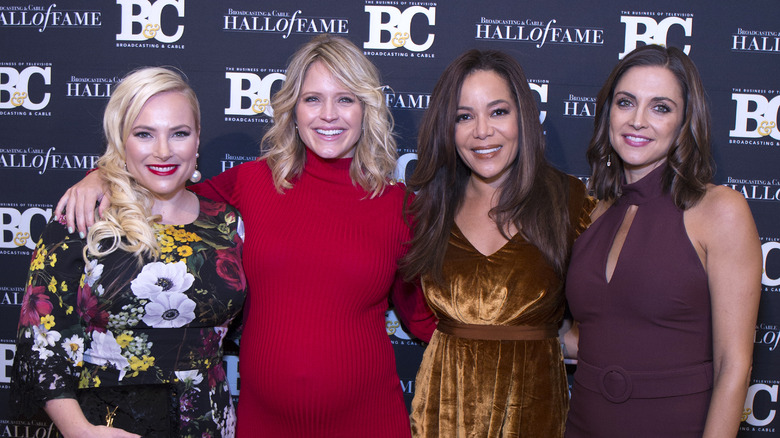 Sara Haines spoke out about Meghan McCain’s decision to leave “The View” when she was spotted in New York City following a taping of the show. The star was quick to deny claims tension with her co-stars led to McCain quitting, jokingly telling a TMZ paparazzo, “If that were the case, who would be left?”

As for where the ladies stand now following McCain’s announcement that she’s leaving at the end of July? Well, it sounds like things are all good. At least between McCain and Haines. The latter admitted she was texting with her former co-star just that morning and they had plans to have a round of shots together “to celebrate” when McCain returns to the Big Apple.

Haines also clarified the real reason the star decided it was time up. “She’s going to be so missed, I think it’s the perfect time. She doesn’t even live here, she lives in D.C. and she has a new baby,” she pointed out. “This pandemic has made us all reassess what matters, that’s really what it.”

As for who Haines would like to replace her soon-to-be former co-star, she explained that she wanted to see someone join the panel who could “represent different views” because McCain “stands alone as one voice that needs to get representation.” Well, there’s certainly no doubting McCain hasn’t been afraid to vocalize her views during her time on “The View.”