Vanessa Bryant joined ‘TIME’ to honor her late husband Kobe Bryant and their daughter Gianna during the magazine’s In Memoriam on Dec. 10. She gave a brief speech about ‘profound loss’ and grief felt ‘across the world’ in 2020.

Vanessa Bryant introduced TIME magazine’s In Memoriam segment on Thursday night, which included her late husband Kobe Bryant and Gianna “Gigi” Bryant. The Lakers legend and the couple’s teenage daughter were two of nine people who perished in a helicopter crash in southern California in late January. She delivered a heartfelt speech in a pre-recorded video during an NBC primetime special, which introduced TIME‘s Person of the Year.

“Words cannot do justice to the grief we felt this year. At every level of human connection from across the world to across the table, we experienced profound loss,” Vanessa, 38, began. “We said goodbye to husbands, daughters, wives, sons, grandparents, friends and national heroes. And we continue to count the lives surrendered to this cruel pandemic, which has claimed well over a million souls, worldwide. Tonight, we mourn the people we all knew and the many we never will,” she continued, adding, “May our collective grief unite us on the path forward.”

Vanessa’s introduction was followed by a moving rendition of “Over the Rainbow” by cellist Yo-Yo Ma and Kathryn Stott. The performance led into a photo tribute to those who died in 2020. The In Memoriam began with a powerful quote from Kobe as images of the NBA icon and Gianna appeared on the screen.

“Everything is a game 7 and when you approach every practice and game with that mentality it bleeds into the rest of the guys,” Kobe said in a past audio clip talking about his on-court mentality. 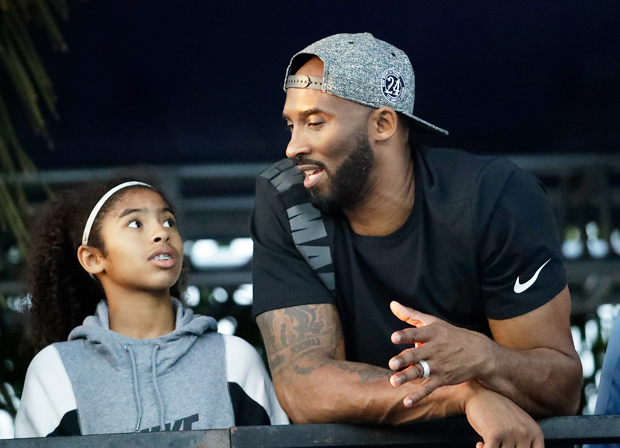 Since the devastating losses of Kobe and Gigi, Vanessa has shared numerous tributes to her husband and daughter. Throughout the year, she took to social media to post old photos and memories on milestone dates, such as the couple’s anniversary and Kobe’s 42nd birthday in August.

Kobe is survived by Vanessa and their daughters Natalia, 17, Bianka, 3, and 17-month-old Capri. Our thoughts are with the Bryant family and those who lost loved ones in 2020.